When a top executive compares the fate of US bricks-and-mortar stores to the country’s real estate market before 2008, we should all take note. In March 2017, Richard Hayne, chief executive of Urban Outfitters, told a group of Wall Street analysts: “Our industry, not unlike the housing industry, saw too much square-footage capacity added in the 90s and early-2000s. Thousands of new doors opened and rents soared. This created a bubble. Like housing, that bubble has now burst – doors are shuttering and rents are retreating, a trend that will continue for the foreseeable future and may even accelerate.”

There is truth in Mr Hayne’s grim augury. The first half of 2017 saw more retailers shut shop in the United States than in the entirety of 2016. And 3,500 more stores, predominantly in malls, are set to vacate in the coming months. The average retail lease in the US has shrunk from an average of twenty years in 1991 to five years in 2016, according to commercial property services firm CBRE.

Household names, chains such as JCPenney, Radioshack, CVS, Abercrombie & Fitch, Macy’s, American Apparel, Sears and Staple, are among those retailers axing hundreds of units, demonstrating the extent to which mainstream brands have failed to keep tabs on the evolving role of stores in retail.

If it is not all doom and gloom for physical stores, their function is certainly changing. Mobile internet has made it easier than ever to shop around for cheaper prices and buy instantaneously, but people will still want to see, feel, test and try products before they commit.

Management consulting firm Bain & Company predicts that even by 2025, some 75 per cent of sales will still occur in physical stores. Those stores won’t simply be places to transact. A shopper standing on the threshold of a store will be quietly asking of that brand, “I have a laptop at home, I have a mobile on me, I’m physically here, so give me an experience I can’t get anywhere else,” according to Dominique Bonnafoux, senior strategist at retail and branding consultancy FITCH.

Physical stores should offer customers the advantages of online shopping and more. “A brand’s store should sell the lifestyle associated with that brand, rather than just the products linked to it,” says Ms Bonnafoux. “Personalisation and convenience are key – that is anything that helps consumers save time, or gain insider access to the brand though a personalised product, personalised customer service or an inimitable sensory experience.”

In terms of personalising their service based on consumer data, physical stores are lagging far behind online. In terms of attitudes held by executives and consumers, understanding is similarly in shortfall. According to a recent IBM survey, executives completely misunderstand what customers want from retail technologies, namely a faster, more convenient retail process.

Here Farfetch, an online marketplace for luxury boutiques, intends to help brands bridge their online and offline retail processes, and combine their data analytics from all channels, with its launch of “the first operating system for stores”. Farfetch’s Store of the Future platform is a suite of technologies that brands and boutiques can buy, and on which third-party developers can build further applications, much like apps on iOS or Android platforms. According to Farfetch’s founder José Neves: “They [physical stores] are not going to vanish and will stay at the centre of the seismic retail revolution that is only just getting started.”

In grocery, Amazon Go is aiming to corner the convenience side of the market with cashless and queueless stores featuring a variety of sensors that cut the number of staff required to man a 10,000 and 40,000-sq ft store to just three people. Ms Bonnafoux, however, believes that this “human-light” model is unlikely to have equal appeal in other categories. “When it comes to groceries, you know what you want. You don’t need someone to advise you what cauliflower to buy,” she says.

In luxury, fashion and auto, however, brands will have to work hard to make their retail spaces distinctive and memorable, and give shoppers a reason to return. “Stores should focus less on selling products or services there and then, and more on giving customers insider access to the brand and providing them with an experience that is impossible to replicate online,” says Ms Bonnafoux. 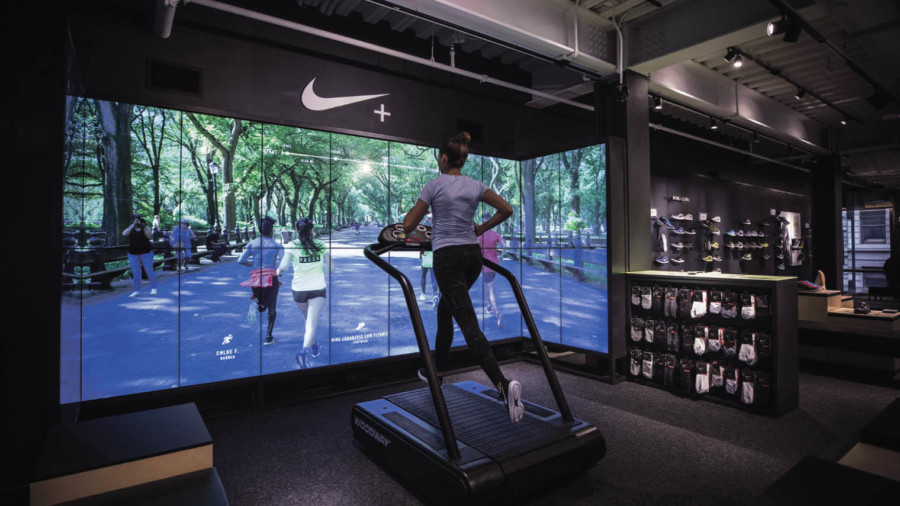 Take the infant-care store Mamas & Papas in Westfield’s White City, which combines learning areas manned by well-trained sales assistants with a community space where local parents can arrange peer-to-peer events. In Berlin, adidas’s Run Base, is a 2,000-sq m running-oriented space dedicated to performance sport and wellness, where consumers can shop, train and attend classes. Similarly, Nike takes a diversified approach to its stores, leading a range of retailers that are experimenting with different retail concepts in different cities. In New York, last year, Nike opened a store resembling a gym and featuring a mini indoor basketball court, running simulations, and an indoor football pitch. While in London, in contrast, Shoreditch’s Nike Lab 1948 focuses mainly on fashion collaborations.

The new So-Milano boutique in Milan invites a new designer to rethink its internal layout and inventory every three months, the latest being London fashion designer J.W. Anderson. And in the pursuit of personalisation, Ministry of Supply, a new US fashion brand launched in Boston, houses a 3D knitting machine in-store, which gives shoppers the opportunity to have a garment custom made as they wait and before their eyes. And at the new Coach flagship store in New York, customers can see full-time craftsman constructing made-to-order luxury handbags following time-tested traditional methods.

If the last 15 years have taught us anything, it is that technological disruption is unpredictable. Thanks to smartphones, mobile shopping may be the most transformative force in retail today, but in ten years self-driving cars could be shaping retail habits and methods equally dramatically. What is clear now is that retail spaces should be designed to be as flexible as possible so brands can refit and redesign spaces frequently. “Ideally you’d want to have more agile spaces and have quicker turnaround of design concepts,” says Ms Bonnafoux.

In retail, as in fashion, no one size will fit all, but physical retailers will have to take the measure of their consumer base, armed with detailed data, to tailor their services to every individual customer’s preferences.