How to compete with Amazon

They are called the GAFA. G is for Google, the king of search. Apple we all know about, with its $246 billion cash pile, a mountain of money so big it could buy Britain’s biggest retailer Tesco with loose change. F is for Facebook. With almost two billion active users, Facebook grew advertising revenue by 53 per cent last quarter year-on-year to $8.6 billion. And then there is Amazon, the beast of retail.

Amazon is now as big as all major US department chains put together. That’s Walmart, Sears, Target, Macy’s, Costco and more – together still not worth four-fifths of Amazon. And the growth. Five years ago Amazon employed 32,000 people globally. In the last year it hired 110,000. One quarter of all office space in Seattle is Amazon’s. In the UK a quarter of warehousing let in 2016 was to Amazon.

The product range is mind-boggling. Books are where Amazon started. Now it’s the top seller of physical books and has an 80 per cent market share in e-books through Kindle. The website offers books, shoes, gifts and groceries. The nickname of “the everything store” is apt and true. Then add in the cloud computing division, Amazon Web Services, which brings in $10 billion a year. Motormouths Clarkson, May and Hammond are spearheading Amazon Video’s attack on Netflix.

But that’s not the point. It’s the creativity of Amazon which is so awe inspiring. The Echo device now sits in eight million homes, talking to consumers as the first mainstream in-home artificial intelligence chatbot. Amazon is pushing ahead with drone delivery, robot-automated warehouses and a concept store where you just walk out with goods. 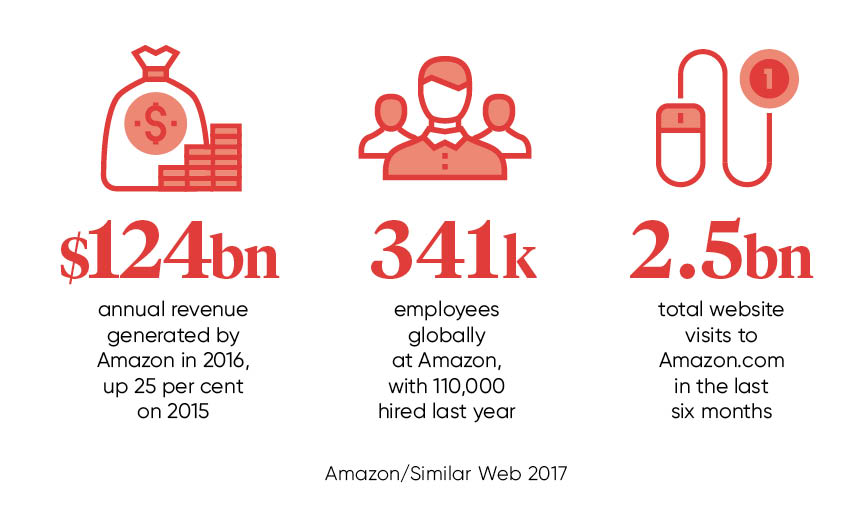 So how do rivals compete?

Is there any hope against this raging behemoth? First, let’s put Amazon into perspective. Online retail in the UK is 10 to 15 per cent of the whole market and Amazon owns just a fraction of that. Sainsbury’s revenue in 2015 was four times higher. It’s all to play for – probe and there are weak spots.The generalist nature of Amazon’s interface means it’s not ideal for specialist orders. Electronics retailer Reichelt.co.uk finds customers prefer its own website for complex orders. “Reichelt’s customers will often buy 200 pieces,” says chief executive Ulf Timmermann. “This can all be easily managed under one order – simpler and easier than with Amazon where many, many different suppliers, delivery times and costs will be involved.”Post-sale service is often unclear on Amazon. Liberty Games sells pool tables, pinball machines and jukeboxes. It believes the size of these goods merits specialist knowledge. Sales director Jamie Stanford points out: “Our vans are designed for heavier tables with tie-down points, non-slip coatings and tail-lifts, and are equipped with trolleys. Our couriers are trained in installing and levelling games tables, allowing us to offer a comprehensive delivery and installation service that cannot be matched by Amazon’s delivery partners. We always send two fully trained games table technicians on every delivery.”

In contrast, Fulfilment by Amazon (FBA), which sends goods sold by third parties on Amazon, often uses lone drivers with no training in installing jukeboxes. “They are fragile, containing large sections of finished wood or cut slate, and often the packaging is not designed for the kind of abuse that it can suffer in the back of a courier van. This leaves a number of chinks in FBA’s armour that can be exploited,” says Mr Stanford. “At Liberty Games, the vast majority of our games tables cannot be fulfilled by Amazon.”

The layout of Amazon’s site prevents clear branding. “Biggest weakness is probably the website,” says Ross Timms, strategy director of creative agency Rufus Leonard. “It’s bloated, hard to navigate and ambiguous who you are buying from.” Beautifully branded proprietary websites can offer an oasis of calm and familiarity. “In menswear, in particular, there’s an emergence of small-batch UK-based manufactured retailers like Albion and Oliver Spencer. They’re all brands that have gone upmarket, cultivate a small loyal cult following, but make a good margin so have a sustainable model,” he adds.

Refuseniks are finding they can command higher prices and a sharper brand experience by keeping their goods off Amazon. “Some manufacturers and suppliers will not allow their products to be sold on Amazon through fear of discounting, which cheapens the brand,” says Jim Wilson, managing director of BornGifted.co.uk, an online toy retailer.

“Simply put, because Amazon can’t have it, we don’t have to discount it, which means we can sell for a sensible profit, which means we can afford to push marketing efforts for this brand. Many ethical and fair trade manufacturers feel strongly about not being sold on Amazon. For example, we do very well with the fair trade toy manufacturer Lanka Kade purely because it will never be found on Amazon.”

Combining forces may work. A new site for companies in the North East is launching to provide a one-stop shop. ThatsChampionPet.co.uk has 22 retailers behind it including Tynemouth Coffee and Low Quay Clothing.

It’s not a zero-sum game. Brands and retailers can list their products on Amazon and gain direct access to millions of customers. And half the goods sold globally are through this open marketplace. Fulfilment by Amazon will mean these companies get access to robo-warehouses, Prime Delivery and drones when they take to the sky.

Amazon is a force never seen before in retail. Smaller rivals will need to adapt. Those that find the right strategy can find a prosperous niche in the new ecosystem.