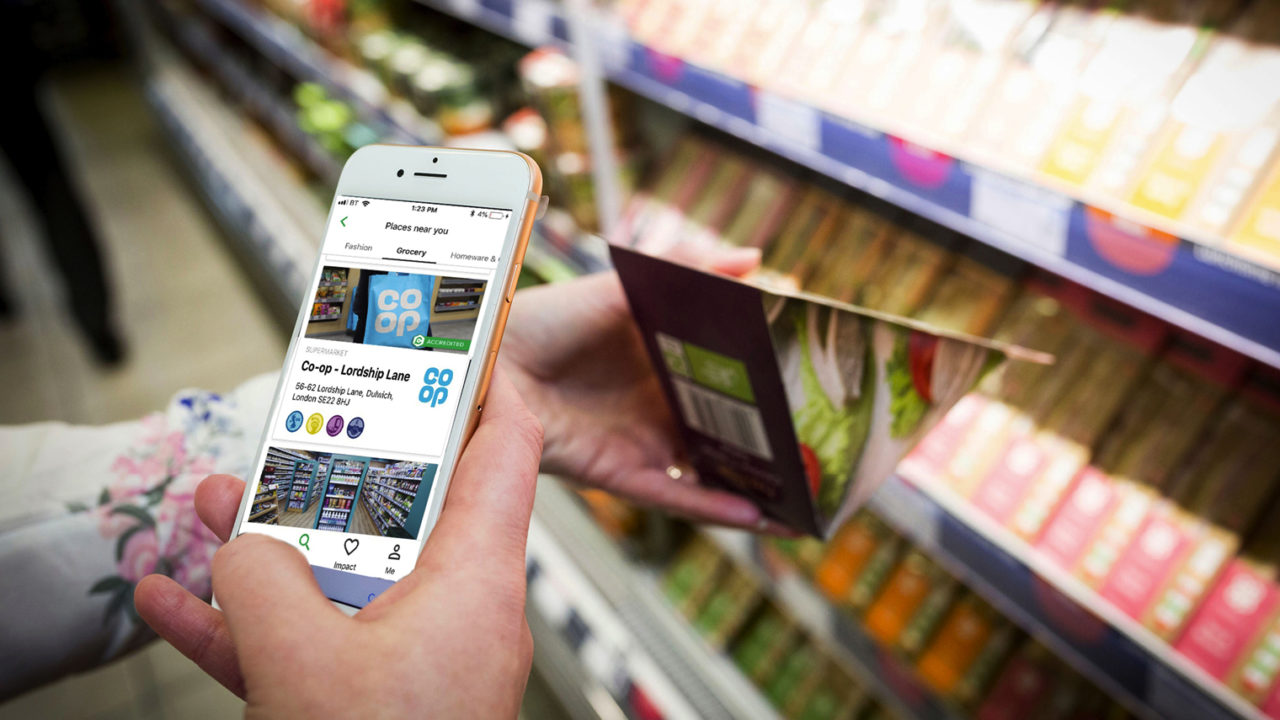 Ethical shopping presents a perpetual dilemma. On the one hand, no one wants to feel like a hypocrite. On the other, who realistically has the time to audit their weekly shopping basket?

The result is often a practical, yet uneasy, compromise: we’ll avoid the stuff we think is “bad” (battery chickens, farmed salmon, palm oil) and cross our fingers about the rest.

Enter CoGo. Originally from New Zealand, this app-based service launched in London earlier this year with the promise of “making ethical living easy”.

As co-founder Ben Gleisner explains, the basic premise is simple: consumers just need to plug in their ethical shopping preferences, and the app points them to products and services that best fit their values.

Participating shop-owners also stand to benefit. Mr Gleisner adds: “We’ve seen a doubling of spending by existing stores because of the ethical and sustainable business practices they have.”

This win-win proposition has won the ear of Co-op, announcing that its 286 London stores will be joining the platform. The move sees the UK supermarket join high-street brands Wahaca and Caravan on CoGo’s network, which now extends to well over 100 participating retailers.

So does the app’s pledge to make ethical shopping easier stack up? And, either way, what does the emergence of smart, data-driven services signal for the future of retail?

The potential issues with brands which claim to be ethical

CoGo’s simple interface unquestionably reduces the hassle factor of ethical shopping. The days of searching for certification labels and reading through the small print could be behind us.

So too is the need to lobby your favourite brands. Thanks to CoGo’s platform, participating retailers now have visibility of their consumers’ ethical shopping preferences, in aggregated form, and so can target their improvements accordingly.

This feedback loop was another driver for Co-op to get involved. As a spokesperson says: “CoGo links businesses to consumers’ payment cards, providing insight on how spending is benefiting them and their communities.”

The system isn’t perfect. Getting Co-op on board marks a big coup, but CoGo’s network of participating retailers is still too small to light the whole high street with an ethical shopping hue. Also there’s the issue of trust. Apps like CoGo can point you easily enough towards a vegan café or a fairtrade florist, but can you be sure the retailer isn’t fibbing?

It marks a legitimate concern. The requirement for participating retailers to meet credible, independent certification standards lies at the heart and soul of CoGo’s model.

“I wouldn’t have given up my job to set up this company if I didn’t feel it was creating real impact in the world,” says Mr Gleisner, a former economist at the New Zealand Treasury.

Veterans of ethical certification are a little more cautious. One fear centres on the proliferation of different standards. As Mike Barry, director of sustainable business at Marks & Spencer, notes: “At some stage, you’re literally going to have to compare apples with apples.”

The genius of blockchain is that information cannot be tampered with. So assuming the initial data about a product’s origins are bona fide, they will remain that way forever and a day.

WWF Australia’s chief executive Dermot O’Gorman gives the example of buying wild-caught Patagonian salmon. Prospective shoppers just need to click on the QR code and their smartphone screens light up with details about where, when and how the fish was caught.

Mr O’Gorman echoes the belief that data-driven disclosure could be a win for retailers. By embracing transparency, brand-owners can increase consumer loyalty while also giving their products a personalised edge, he says.

“There’s a demand for connection and authentic stories out there in the market. Embracing innovations such as OpenSC gives every product an individual identity and an individual story,” says Mr O’Gorman.

From a business perspective, this is where ethical shopping starts to get super interesting. In the marketplace of the future, retailers must not only know the likes and dislikes of their individual customers, they must tailor their offer in a way that reflect this.

Ethical shopping innovators such as CoGo and OpenSC are blazing a trail for this kind of hyper-personalisation, according to Will O’Connor, co-founder of The iO Group, a health and retail consultancy.

“The web, digitisation of data and the march of machine-learning make possible a level of bespoke consumer focus that the mass consumerism of the 20th century could not achieve,” he says.

Not all retailers care about ethics, by any means. But all accept the importance of personalisation for their future success. If responding to consumers’ ethical shopping preferences can help crack this challenge, then respond they most certainly should.

Will O'Connor, co-founder of retail and health advisory company The iO Group, offers his thoughts on conscious retailing Retailing is changing fast. Two centuries of analogue-only retail are now in their twilight hour. The future for retailing will require the twin issues of sustainability and technology-enabled personalisation to be front and centre in retailers’ strategies. Consumers are demanding more than ever that the effect retailers have on people is positive, from the farm to the fork or from the cotton plantation to the clothing store. With climate change seen as the defining existential threat of our time, consumers will increasingly insist that businesses must steward the environment wisely. Retailers also need to be aware how technology is shaping the new retail epoch that awaits. Consumers relish the speed, convenience and value that the web and technology have delivered. The marriage of data and increasingly sophisticated artificial intelligence will deliver hyper-personalisation. This will enable brands finally to get close to the fabled single-customer view, permitting them to fine-tune their goods and services. Retailers can future-proof themselves by engaging with these two trends of sustainability and customer-centric technology. The triple bottom line – people, planet and profit – and tech-enabled new possibilities, such as hyper-personalisation, are two areas that all retailers must address in their strategies going forward.