According to Korn Ferry’s Retail CEO Tracker 2018, the percentage of female retail chief executives appointed during 2017 slumped year on year, with the six-year trend from 2012 to 2018 showing little improvement in the number of women appointed to the role. In an industry where 85 per cent of purchases are made or influenced by women, what is going wrong at the top?

N Brown Group chief executive Angela Spindler says: “It has been a very challenging time in the retail sector, from the economic backdrop through to the weather, and this all affects consumers and their desire to shop. When times are tough, the appetite for risk from boards is just not there; they want to see a proven track record.”

If there’s to be any improvement, change needs to come from the most senior level, Ms Spindler says. “The responsibility is for chairmen, chief executives and recruiters to do more,” she explains. “My rule is I never accept a candidate list that doesn’t have a good balance of men and women. There is a process issue around retail and talent in the industry, and business as a whole.”

Sarah Lim, managing director of retail at executive search firm Korn Ferry, agrees. “There are only a handful of female chairmen in the retail sector and I think there is a ripple effect from the top,” she says. “We need more role models; this means more female chairmen and not just women as non-executives on boards.”

Brenda Trenowden, global chair of the 30% Club, launched in 2010 with the goal of achieving a minimum of 30 per cent women on FTSE 100 boards, says change will only happen with enlightened bosses. “It’s shocking, but if a CEO doesn’t really feel it’s important for a business, nothing will happen. They need to make it a top-five business priority,” she adds. 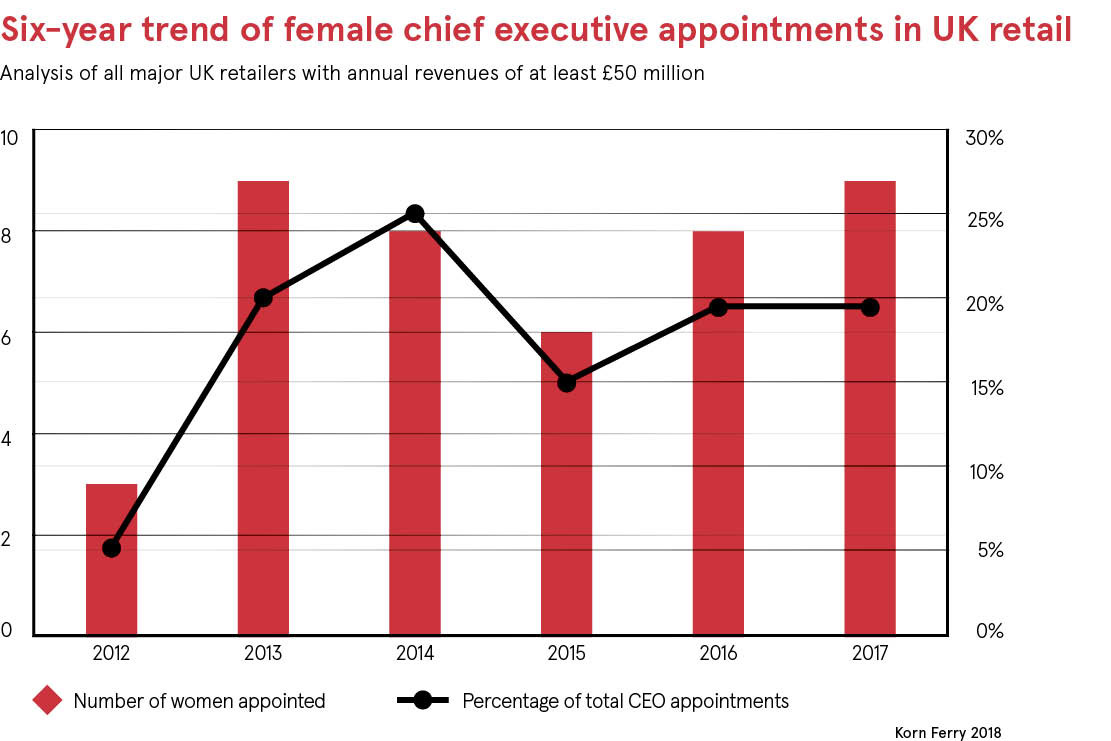 Ms Trenowden says there needs to be a seismic shift in culture within the retail sector to see real change. “We need more role models, agile working, flexibility and a blend of leadership styles,” she says. “It needs to be about making business better and not just a human resources issue.”

IKEA’s UK and Ireland country manager Gillian Drakeford says a top-down and bottom-up approach is needed. “Encouraging and inspiring female co-workers from the very beginning of their careers is key,” she explains. “This is something I experienced first-hand, and it enabled me to recognise my own strengths and abilities in a leadership role.”

Globally, the IKEA Group has committed to a 50/50 gender split in all functions and management teams. Across IKEA UK, this works out as 50.2 per cent male and 49.8 per cent female at management level. Ms Drakeford says to see transformation, retailers need to realise this shift both culturally and practically.

“HR policies should support driving greater equality, from interviewing at the recruitment stage to offering flexible work arrangements. But, most importantly, instilling a value system that cultivates a supportive, nurturing culture in the workplace is imperative to creating change,” she adds.

Ms Lim agrees: “We don’t have a shortage of women going into the retail workforce or a shortage of female graduates. The starting point is good, but they will often drop off for personal and family reasons. There is a point often where choices have to be made and this comes at the middle-management rank.”

Lizzie Penny, co-founder of global flexible working community The Hoxby Collective, says lack of flexible working options is a huge barrier to success for many women moving up the ranks. “Too many organisations still don’t challenge the preconception that senior-level roles require a 9am to 5pm, five-days-a-week physical presence. This is not necessary in today’s digital world. Companies need to take this into account if they want to attract and retain the best talent, and sustain competitive advantage,” she says.

Ms Spindler says it’s both a cultural and confidence issue: lower expectations of women in business coupled with women not putting themselves forward. Some headway is being made, however, with high-profile female chief executive appointments at Card Factory and Karren Millen over the last few years, but it will take time for a pipeline of new talent to come through.

Sarah Walter, chief creative officer at retail startup Metail, says the UK needs to begin early by encouraging more women into STEM (science, technology, engineering and maths) subjects, but also ensuring there is ongoing business training for women working on the creative side of retail, to help them transition into leadership roles.

N Brown Group has launched a number of new initiatives in the last six months, says Ms Spindler, aimed at helping to provide potential future leaders with role models. This includes internal monthly leadership programmes and networking groups, with inspiring female guest speakers from Google, among others. She is also a champion of the Be Inspired initiative by trade magazine Retail Week, which aims to help promote the careers of successful female retail leaders.

Ella d’Amato, chief commercial and partner officer at Not On The High Street, agrees that female role models in the industry are key, but fears we are in a “Catch-22” situation. “Until there are more women who can act as role models, it is hard to inspire women to pursue top jobs or become retail entrepreneurs,” she points out.

Lucy Ward, creative brand director at retail startup Trouva, says role models and mentorship have been crucial stepping stones in her career. “I’ve found so much value in it at the start of my career, but even more so now as I take on more leadership responsibility,” she says.

Ms Lim concludes: “Business needs to be reflective of society; we’re in a situation where almost half the global population are women, but less than 5 per cent are retail chairmen and CEOs.”