On the road to connected and driverless cars

The world has become evermore connected with SIM-fitted vehicles that “talk” to each other and autonomous cars purported to be safer and “smarter”.

Technological challenges remain in terms of developing widespread sensor networks to communicate data, and concerning mass data analytics and security. But the question has become whether the future is going to be one of autonomous cars, seamlessly moving from place to place with no input from a driver, or will cars provide drivers with a wide range of support?

Assisted driving already exists and, with the enormous amount of computing power available in the average vehicle, most already qualify as “connected”. Tesla recently even upgraded autopilot software in its cars, following stress-testing which involved people driving from San Francisco to New York using autopilot mode for more than 96 per cent of the trip.

IBM predicts that by 2020 the car will be the most connected app, and 250 million vehicles will be connected and fully packed with sensor technologies.

The work Google and Apple have been doing in developing driverless vehicles, combined with deep expertise in data management and analysis, suggests traditional car makers may be behind the curve in the connected car market. 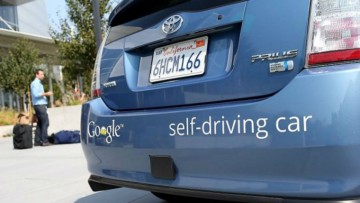 But Stuart Young, a partner at law firm Wragge & Co, sounds a note of caution when assessing the digital potential of automotive manufacturers. He says: “We may be underestimating their systems integration capabilities.”

As IBM executive Martin Borrett points out, new cars are already “like a small data centre on wheels”. Perhaps the expertise that comes with years of physically engineering vehicles will make more of a difference than the tech giants expect.

Richard Candler, head of product strategy at Nissan, is not chasing the ideal of the driverless car, arguing there is as yet no customer demand. Mr Candler says: “People enjoy driving,” and suggests there is a long way to go before driverless cars will be accepted. “How can we be 100 per cent sure that we can anticipate any situation?” he asks, with technology and liability issues still to be worked out. There is lot of deep learning needed to move such vehicles out of controlled environments where they currently operate, he adds.

New relationships are forming between the digital and physical worlds as infrastructure, services, vehicles and people connect in new ways 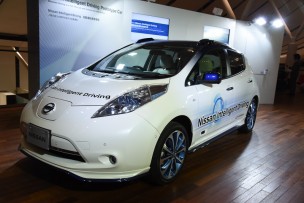 Instead Nissan is focusing on assistance, taking the hassle out of driving on motorways, in traffic jams or when parking. The company has already launched Safety Shield, which can do a lot of what an autonomous car does and is already on 50 per cent of Nissan cars. With its new Piloted Drive 1.0, Mr Candler believes the cars will have a system that by 2020 will be able to take over the driving when necessary.

At Mercedes-Benz, attention is on the passenger within the connected car. Rather than focus on taking over the driving, the company has developed an app with Pivotal. Mercedes.me is designed to give drivers deeper insight into the driving experience with access to a variety of information about the status of the vehicle, remote control of things like auxiliary heating, the ability to open and close door locks from afar, a convenient navigation tool via iPhone and Apple Watch, and other new features.

Daimler has taken yet another approach, looking to connect vehicles to the enterprise. It recently announced a strategic partnership with telematics service provider WirelessCar, which is part of Volvo, and has signed a strategic internet of things partnership to extend service offerings to fleet management services. The joint venture is due to start in 2016 with services including location and vehicle follow-up, as well as extensive reporting through portals and mobile apps, increasing vehicle uptime and utilisation. 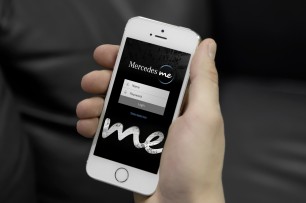 Mercedes me is a personalised service connecting you, your car and your smartphone. Source: Caradvice

However, it is possible that the greatest disruption will come through the development of services, rather than new technologies. As design and strategy consultancy Frog points out: “New relationships are forming between the digital and physical worlds as infrastructure, services, vehicles and people connect in new ways.”

Perhaps the most important thing for the automotive industry to understand, especially for asset owners, is the “uberisation” of transport, where companies such as Uber and Lyft are challenging by focusing on customer preference and ease of use.

Nicholas Farhi, a partner at OC&C Strategy Consultants, says: “In car hire, aggregators like Cartrawlers have been able to grow rapidly because they are better at selling and pricing the rental companies’ own assets than the hire companies themselves.

“Even in the world of long-distance train travel, ride-sharing businesses like BlaBlaCar are offering credible alternatives for a certain type of customer. BlaBlaCar’s French business is now a major competitor of France’s state-owned railway SNCF and already delivers a quarter as many long-distance journeys.”

Helsinki is one city that has taken this idea of personalisation to heart. It is taking an entirely new approach to the concept of mass-transit, by turning it into individual and personal transit. Finland’s capital is exploring the concept of a city without cars by 2025, through the creation of a point-to-point transport system providing mobility on demand.

It is hoped this will be created by combining various modes of public transit with ride-sharing services using innovative technology and cutting-edge data analytics, all accessed via portable devices.

But Nissan’s Mr Candler warns there are a number of challenges still to overcome in the connected car market, notably customer demand, technology, experience, liability, security and regulation.

French Caldwell, chief evangelist at MetricStream, argues that as companies develop new innovative technologies, the biggest challenge facing the transport sector is regulation that is irrelevant, out of date or impossible to comply with.  This is going to be increasingly complicated as the shift from assisted to driverless vehicles is not likely to be binary; there will be some crossover.

Security will remain a challenge, although Mr Borrett points out that IBM already manages secure analysis across enterprises. Assessing liability is also likely to be difficult as the industry begins to grapple with who would be responsible for an accident.

Caroline Coates, head of automotive at business law firm DWF, says: “Clearly this extends past the traditional relationship between drivers and their insurers to include manufacturers, and possibly infrastructure, communications and technology providers.”

Perhaps the biggest challenge, however, will be public acceptance and the government’s Innovate UK has funded three pilot studies to explore exactly this impact. Arup is leading one, named UK Autodrive, a £19.2-million project featuring a programme of feasibility studies and practical demonstrations in Milton Keynes and Coventry. The goal is to provide insights for vehicle manufacturers, cities, commercial operators, legislators and insurers to develop the legal framework for the roll-out of autonomous mobility.

If we are to achieve a future of driverless cars, we need to understand how the necessary roadway sensor systems will be funded, as well as how policymakers will manage regulation in an unforeseen environment. Most important though, will be public trust. Consumers have to trust that the technology, systems and legal environment are all in place. And that may prove more difficult than expected.