The history of HIV/Aids is a story of pain, fear, hate and ignorance of a scourge which has claimed more than 35 million lives worldwide

The World Health Organization this September launched new guidelines aimed at getting antiretroviral medicines to HIV patients faster and using other treatments to reduce transmission of the virus. The move serves as a reminder of the 30th anniversary of the availability of the first HIV antibody test or, in other words, the first medical intervention to tackle the condition.

Although three decades of intense work without yet beating the virus may be cause for some disillusionment, that action in 1985 was in fact the beginnings of a markedly rapid response. There had been instances of infection dating back to the mid-1970s, but it was not until 1981 that the first cases of unusual immune deficiency were identified, among gay men in the United States. Some argued that the condition was a response to the recreational use of amyl nitrate.

The same year saw the US Centers for Disease Control and Prevention issuing the first official report on what would become known as the HIV – human immunodeficiency virus – epidemic. Within a year it was defined as Aids – acquired immune deficiency syndrome.

“The story of Aids is unique in history in the sense that awareness started vocally, among the people affected by HIV, and it was they who became a large part of the action and response to it,” says Anne-Marie Hou, UNAids director of global advocacy.

Back in the early-80s, we couldn’t even work out what to call it – other than a death sentence

“Unlike other epidemics, in which people tend to get better and interest drops away, the original activists wanted to stay involved in getting people access to treatment. This was the kind of positive change in tackling the virus that couldn’t have happened with government action alone.”

David Furnish, chairman of the Elton John Aids Foundation, says: “The history of HIV really is one of a fantastic global effort, from organisations the likes of Act Up to combined funding efforts from public, private and philanthropic sources. It’s been an example of what progress can be made when people unite in a cause.

“I remember, back in the early-80s, we couldn’t even work out what to call it – other than a death sentence. I lost a lot of friends. There seemed to be no hope. But really quickly it mushroomed into being the biggest health issue on the planet.”

And, as it would turn out, more so in some parts of the world because the history of HIV/Aids is one of highs and lows, breakthroughs and setbacks, but also of a divide not only between rich and poor people, but rich and poor nations.

In 1982, for example, research by Dr Robert Gallo, now director of the US Institute of Human Virology, pin-pointed HIV as the cause of Aids and work on its suppression began. The following year, in Africa, an epidemic was uncovered on a scale that simply daunted those working in the field of preventative medicine. Epidemic became pandemic.

HIV was thought to have originated in the chimpanzees of west equatorial Africa, their blood infecting humans during hunting or butchery, with the first confirmed case of HIV-1 in humans dating to 1959 in the Democratic Republic of Congo. But the virus probably took hold there during the 1920s, in Kinshasa, during a perfect storm of population growth, a buoyant sex trade and the rapid expansion of the railways.

The African outbreak altered attitudes. Through fear and ignorance HIV/Aids had been characterised as a “gay plague”, but now it was suddenly reassessed as a condition that could strike anyone, homosexual or heterosexual, who was sexually active. Or it could be passed from mother to baby via breast milk. Or, as the death of haemophiliac teenager Ryan White in 1990 underscored, HIV could be contracted through blood transfusion.

Although 1987 saw the US approval of the first of many therapies for Aids – zidovudine or AZT – it wouldn’t be for another five years or so that the first major downturns in the epidemic were recorded in developing countries. Not for another decade would Brazil become the first developing country to provide antiretroviral therapy through its public health system.

Even then new infections globally were still peaking at around 3.2 million a year. It was small wonder that come 2000 the UN Security Council identified Aids as a security threat, the first time a health issue had been labelled as such; or that in 2003 the United States President’s Emergency Plan for Aids Relief, committing $15 billion over five years, would become the largest single funding commitment to a medical condition in history.

Indeed, the scale of the issue would prompt what Ms Hou at UNAids describes as “so many examples of disruptive behaviours that the history of the response to Aids represented a new way of doing things”. One such disruption concerned the pricing and provision of antiretroviral drugs. If pharmaceutical companies’ right to profit hugely from their development work into new drugs was largely accepted as a de facto aspect of capitalism, then US President Bill Clinton’s push for the sale of drugs at cost and moves such as 2001’s Doha declaration on intellectual property rights to support public health, would change that.

In 2006 Unitaid, founded by the UK, Norway, Brazil and Chile, became the first international drug purchase facility, financed through a levy on airline tickets, and in 2011 India pledged the continued availability of high-quality generic versions of the antiretroviral drugs.

The impact of such an approach was seen in the numbers. In 2002 some 300,000 people in developing countries were on treatment; come 2010, 6.6 million people globally were being treated.

But the statistics only tell part of the HIV/Aids story. It is, of course, about people’s lives and a sometimes tragic tale of misinformation and denial, witch hunts and fear, and sometimes of new understanding too.

Media milestones include the revelation, in 1985, that Hollywood heartthrob Rock Hudson had Aids. Princess Diana caused a storm in 1987 by shaking hands with an HIV-positive man. Rock star Freddie Mercury suffered Aids and died in 1991.

US basketball superstar Magic Johnson announced the same year he was HIV-positive, driving home that the condition was not an exclusively gay issue. Tennis ace Arthur Ashe revealed in 1992 that he had Aids, probably the result of a transfusion.

But in 2004, South Africa’s president Jacob Zuma told the world, to slack jaws, that he couldn’t catch HIV because he always showered after sex. Most recently, last month, actor Charlie Sheen appeared on a US chat show to confirm he is HIV positive and revealed he had been victim of extortion demands.

“The history of Aids is one of travelling light years in terms of treatment and yet remaining in the Stone Age in attitude,” Mr Furnish, the partner of Elton John, concludes.

“The treatment is better than ever, but there’s still not enough of a dialogue in society to combat a virus that remains heavily stigmatised, that’s associated with shame because it’s usually sexually transmitted, that’s associated with other marginalised people, that should be part of an everyday conversation about health in the same way that, for example, diabetes is. So we have some way to go.”

The worldwide fight against HIV/Aids is not over. It was only in 2005, almost 25 years after the first cases were identified, that the number of people dying annually from Aids-related conditions peaked at 2.3 million.

But, as the Elton John Aids Foundation’s David Furnish notes, recent progress has been impressive. “It’s extraordinary to live through times in which there’s been such progress with a deadly disease almost to the point of its eradication,” he says. “We may not have a cure but we have the tools now to stop new infections and treat those who have the disease. That’s a hugely empowered situation.” 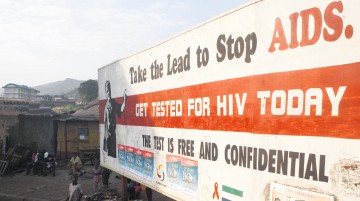 Anne-Marie Hou, UNAids director of global advocacy, adds: “There’s change now on an exponential level, in the sense that we now have what it takes to break the epidemic as a public health threat by 2030.

“There’s a great preventative aspect in just getting everyone who needs it access to treatment. What’s scary is that new infections will create numbers so large that the world couldn’t find the resources to tackle them.”

Indeed, the biggest problem in beating the epidemic over the coming years will be, according to Ms Hou, dealing with cultural and generational shifts. Aids must be kept at the forefront of world affairs despite other growing humanitarian crises. Meanwhile, awareness must be raised among younger people. People under the age of 24 now account for one in four of all new infections.

“They haven’t lived through times when people they knew died from Aids, which encourages a return of risky behaviour,” she says. “It’s why action now is more attuned to social media. We have to do all we can to get a new generation aware of the real and ongoing impact of Aids again.”