Is it time for the digital advertising industry to grow up?

Marc Pritchard, chief brand officer of Procter & Gamble, the world’s biggest advertiser with a $7.5-billion annual budget, started a shockwave when he told the digital advertising industry that it needed to grow up.

The man who oversees the marketing for trusted household brands such as Always, Gillette and Pampers said online advertising had passed its 21st birthday and yet it was still behaving like an unruly teenager who doesn’t take its responsibilities seriously.

He identified a series of problems including ads appearing next to inappropriate content, a lack of agreed common standards for how long an ad is seen on screen for it to be counted as a view and computer bot fraud where ads are not even seen by humans. The media supply chain is “murky at best, fraudulent at worst”, Mr Pritchard declared.

A rude awakening for the digital advertising industry

The digital ad industry has had a rude awakening over the last 18 months as other chief marketing officers (CMOs) have followed his lead and demanded action to clean up what Keith Weed, CMO of Unilever, the world’s second biggest advertiser, has called the digital swamp.

The problems with online advertising have become a boardroom issue after the YouTube brand safety row, when dozens of brands discovered their ads were appearing next to jihadist and other extremist content, and the Cambridge Analytica scandal, when the data firm obtained personal information from 87 million Facebook users.

There’s a growing consensus among CMOs that they need to take a much tougher, proactive approach to policing the digital world.

Mr Weed warned of a “techlash” if the online giants do not change, although he was hopeful of progress.

According to Mr Weed, the problems with the online ecosystem go much further than advertising and have become an issue for society itself.

He has put Google, Facebook and other technology companies on notice and said Unilever, which owns brands such as Dove, Lynx and Marmite, would not advertise on any platform that fails to clamp down on abusive and hateful behaviour.

Mr Weed warned of a “techlash” if the online giants do not change, although he was hopeful of progress.

Procter & Gamble and Unilever have been willing to speak out not only because of fears about brand safety and trust, but also because of questions about the effectiveness of digital advertising itself and whether it might be having a negative impact.

Advertising needs to move away from “spray and pray” approach

It is already clear that brands need to rethink the role of interruptive advertising because consumers have been downloading ad-blockers on their smartphones to avoid intrusive marketing messages, and paying for an ad-free experience on Netflix and Spotify.

Scott Hagedorn, global chief executive of Hearts & Science, a media agency which counts Procter & Gamble and AT&T as clients, has warned of the dangers of “negative reach” if brands bombard consumers with unwanted ads and rely too much on digital platforms with fragmented audiences.

What’s more, some leading brands have inadvertently embarked on an experiment with their digital advertising plans because of concerns about where their ads have been appearing.

Procter & Gamble said it cut more than $100 million in ad spend on digital platforms… and saw no negative impact on sales.

After Procter & Gamble and the UK government abruptly pulled their ads from YouTube for an extended period in the wake of the scandal over extremist content, they discovered whether it was possible to live without the world’s biggest video site and were able to assess the impact on their campaigns.

Procter & Gamble said it cut more than $100 million in ad spend on digital platforms over the course of about three months in spring and summer 2017, and saw no negative impact on sales.

The YouTube brand safety row has also encouraged brands to take more responsibility for the placement of their ads and not to delegate all the decision-making to their media-buying agency.

Advertisers have woken up to the perils of a “spray and pray” approach, which can involve buying ads on hundreds of thousands of websites through automated, targeted advertising known as programmatic trading. 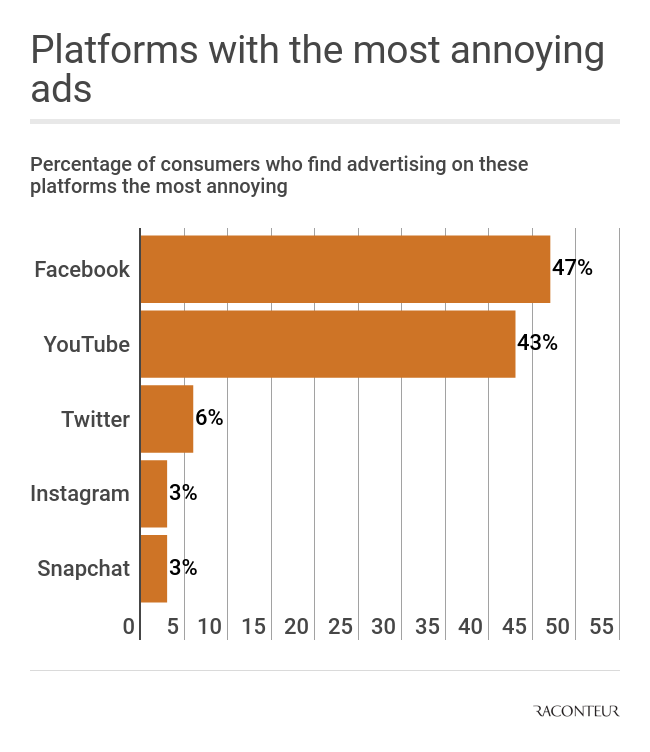 Research by the Interactive Advertising Bureau, a US trade body for the digital ad industry, and Accenture Interactive, the digital marketing arm of consulting giant Accenture, has found 65 per cent of brands are bringing some or all of their programmatic ad-buying in-house.

Many brands have also introduced tougher, so-called “whitelists” of sites on which their ads can appear.

CMOs have channel fatigue. They are fed up with what feels like a bewildering array of choices offered by a burgeoning number of intermediaries in the digital media supply chain.

A survey of the number of ad and marketing tech firms in the global media industry, compiled for the annual MarTech conference in California this April, estimates there are more than 6,000 companies operating in the online advertising ecosystem in 2018.

Many CMOs are responding by focusing on quality and context, instead of just volume and reach, whether it is the number of sites they use or the number of ads they create. Unilever is making 30 per cent fewer ads than a year ago and has halved the number of agencies with which it works.

The consumer goods giant is also running its ads for a longer period because it found many of them were not “wearing out” as the target audience of consumers had not got bored with the ads.

There is growing optimism that the ad industry is making some progress in cleaning up the digital swamp.

Some industry observers have talked about a “swingback” to trusted, regulated media with mass reach such as TV and radio, news and magazine publishers, and out-of-home screens and posters.

But as virtually all media channels are set to become digitised, CMOs are likely to distinguish not between digital and analogue, but between trusted and untrusted media. Channel fatigue is set to usher in a new era of channel quality.