It’s the manufacturing capital of the world. Whatever you want, it is there. Motherboards, custom silicon, transistors, touch screens – a stroll through the bazaars of Shenzhen takes you past it all 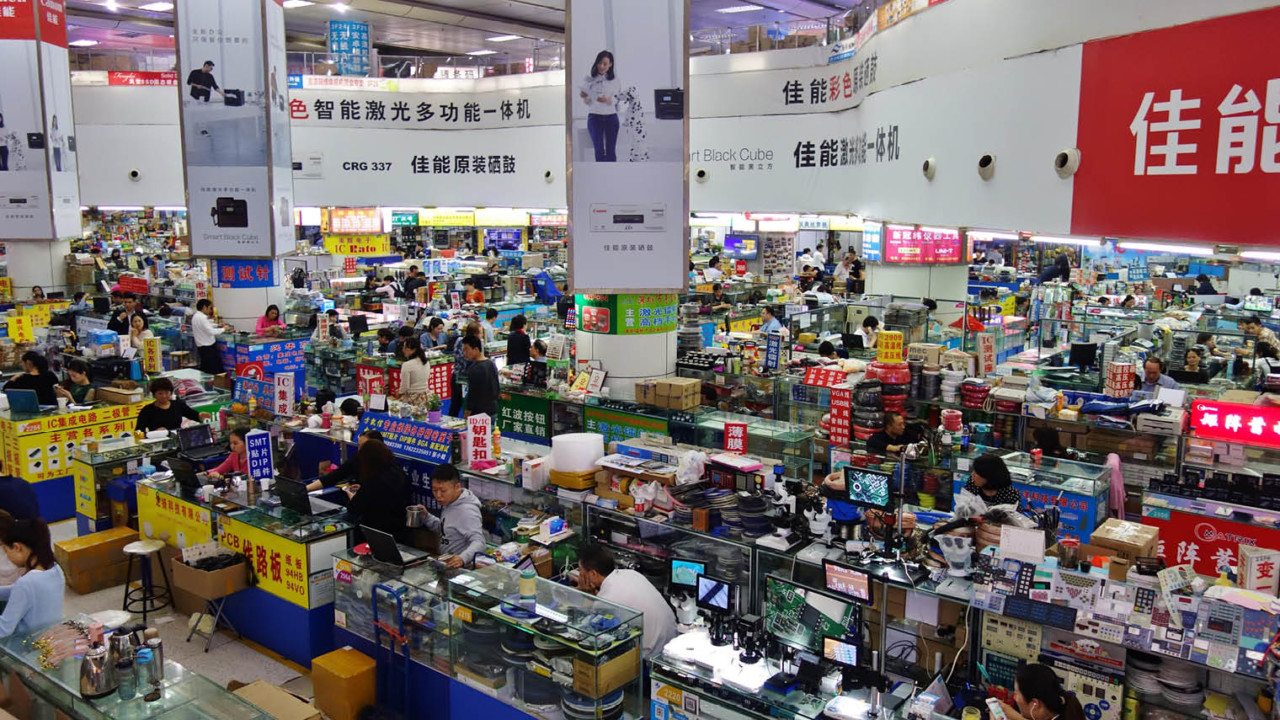 Connected to Hong Kong by subway, Shenzhen has grown from a fishing village of 30,000 residents in 1979 when Chairman Mao died to a 12-million-strong citadel of capitalism.

And Shenzhen has a dirty secret. At the heart of its manufacturing boom is a near-total disregard for intellectual property rights. Knock-off  iPhone 7s are on sale for £100. The performance of the dodgy unit is phenomenal, almost Apple quality. Want a counterfeit tablet or music system? It’s all here. If not, a back-street genius will cobble it together for you at the right price.

Locals think of forgery and hacking as an ethos, not a crime. If you can’t innovate faster than the copycats can copy, then frankly you deserve oblivion. This way of thinking has propelled Shenzhen to the pinnacle of innovation in the “maker” industry – small-scale manufacturing for things like drones, internet-connected devices and other consumer electronics.

Back in the UK, our manufacturers have to play by the rules. Lawyers are seen as strategic assets for the way they block rivals. James Dyson built his multi-billion-pound empire with the support of the courts. He hit Hoover with a lawsuit at the turn of the millennium, won the judgment and gained years of advantage over his chief rival.

But the question is this: how can UK manufacturers compete with Shenzhen when the Chinese break the rules so flagrantly? If the Chinese can create what they want, free-riding on the expertise of others, it’s an unequal battle. Sure, we can keep the knock-offs out of the UK, but we’ll lag in terms of pure innovation. Won’t we?

We are seeing the emergence of an answer. The UK can compete. The solution lies in a clever mix of old-fashioned intellectual property defence and open source manufacturing. The mixture is the rocket fuel behind the explosive growth of our own maker industry.

This is software or hardware for which the code and design are open for anyone to access, use, change and share. Android software for smartphones is an example; the code can be read and modified by anyone. Other open source examples include the LibreOffice document suite, the Firefox internet browser and the Raspberry Pi micro-computer.

UK innovators are using open source to leapfrog legal obstacles and compete head to head with innovators in places like Shenzhen.

Liverpool offers a fine example. The city is ready to open the gleaming new Sensor City, a collaboration between the University of Liverpool and Liverpool John Moores University. Sensor City is a playground for inventors in the fields of sensors and the internet of things.

“We cut the ribbon in October,” says executive director Alison Mitchell. “We have an open collaboration space, a hackathon space, technical space, lots of hot desks and shared desks, and offices. We have a mechanical workshop, electrical workshop, 3D printers, an optical workshop and the ability to print circuit boards. It’s a national asset, a community of like-minded people working together in one place.”

Open source thinking is the dominant force. Ms Mitchell’s colleague at Sensor City, Dr John Kenny, explains: “Open source allows you to accelerate the development of your product. Users can feedback and your community can even fix issues for you. You can use other open source ingredients in your product.”

Old hands may point out that open source has been around for years. Which is true. But we are seeing it thrive in manufacturing and design. Some of the most important products in tech are being released open source. A new processor architecture called RISC-V is entirely open source, offering a breakthrough for startups and larger developers.

Andrew Back, who runs the Wuthering Bytes tech festival in the Pennines, says it’s a sign of how advanced open source has become. “You can build your own RISC-V processor and pay no royalties. With a licensed design from, say, ARM you might need to sell £10 million of products to make it worthwhile. That’s a high barrier to entry. Open source reduces this to £100,000,” he says.

Another implementation of open source is with the Large Hadron Collider at CERN in Geneva, where the mysteries of the Higgs-Boson particle were uncovered. “CERN use open source instrumentation, such as for the timing,” says Mr Back. “It means if one supplier is no longer the cheapest, or goes bust, CERN can go to an alternative supplier. Peer review is another reason.”

The growth of open source designs means UK manufacturers can draw on a galaxy of pre-existing designs, software and equipment to use and modify in their inventions. A 4G cellular base station produced by Lime Microsystems in Surrey is a great example. Lime used open source ingredients to build a cutting-edge product, and is working on research with the likes of Vodafone and EE.

Naturally, there is an objection to the open source movement: if designs are accessible to all, and copying is easy and free, then what is the motive to innovate via open source?

There are three main reasons:

Firstly, innovators may not be able to make money from their direct contribution to the open source project, but they can get far more back via affiliated products and services. In the Linux world, Red Hat is the leading services company, designing systems such as operating system for the US Navy’s USS Zumwalt stealth destroyer. It has a turnover of $2.4 billion.

Secondly, open source gives you a universe of pre-built units to plug together. The open source database Libraries.io offers data from 2.4 million projects. By contrast, the proprietary route is cripplingly slow. Mandi Walls, technical community manager of automation platform Chef, says: “Instead of every manufacturer solving the same problem from scratch, developers can start with the basics already covered, and put their efforts and energy into building code that breaks new ground.”

Third is the community. Building things takes the talent of many of people. Dave Shuman, manufacturing leader at big data analytics company Cloudera, explains: “The real advantage of open source is the community that creates it. The community is global – no single organisation could hire all the smart, motivated people worldwide that collaborate on open source projects.”

The ethos attracts the very best people. Mr Shuman continues: “Talented engineers gain membership in a community where the price of admission is creativity, talent and a willingness to bring the code. No matter where you live, regardless of your background, if you have the talent, you can join the club.”

Even the Chinese are on board. Mr Shuman points to the driverless car initiative of China’s main search engine Baidu. “The reason behind this changed approach to both using open source within Chinese products and services, and making Chinese-developed software available via open source, is to cultivate and leverage a community of developers who will use their talents to enhance said software in ways that will better scale to meet the needs of the extremely large Chinese market,” he says.

Open source is changing the rules of manufacturing – anyone can enter and collaborate. The innovators of Shenzhen may flout intellectual property laws to get ahead, but the rise of open source means even law-abiding Brits can compete.