An inherent ability to allow more secure, transparent and easy tracking of transactions and objects has piqued interest in blockchain among global supply chains.

Certainly, many major players have this year declared they are ready to bet big on this form of distributed ledger.

Global shipper Maersk says it will launch an industry-wide trading platform powered by IBM blockchain. The company’s bosses hope it could “form a utility that brings standards across the entire ecosystem”.

Essentially, Maersk wants to digitise the entire supply chain, tracking online and in real time tens of millions of shipping containers globally from end to end, a process that normally involves up to 30 people and more than 200 different communications.

Beyond tracking containers, the cryptography-secured online ledger that blockchain provides, paired with electronic tracking technology, could also prevent product counterfeiting and fraud, putting an end to scams like the 2013 horsemeat scandal or more recent reports that real cat fur is being sold on the high street as faux fur. 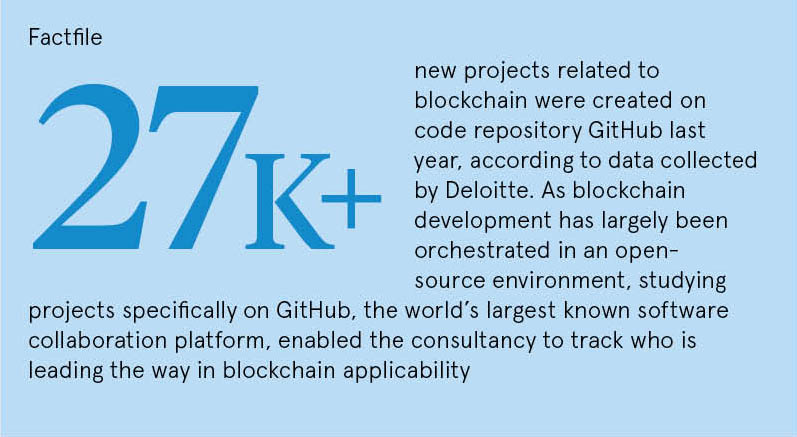 “Blockchain has the potential to create a very deep level of traceability and origin by storing information in a place where you can guarantee it won’t be tampered with,” says Renato Grottola, DNV GL’s digital transformation director.

Any product or raw material can be given a universal unique identifier or code from the moment it is made. This would be logged on to the blockchain and every time the item gets moved or modified it is permanently tracked on the ledger.

“This creates several obstacles to cheating the origin of a product and the transformation process it was exposed to,” says Mr Grottola.

DNV GL, a risk management and global assurance company, last month announced a partnership with blockchain firm VeChain that aims to improve the efficiencies of its customers’ supply chains, making them more “peer to peer and trustworthy”.

Precious stones retailer De Beers has also said it wants to use a blockchain ledger to track diamonds each time they change hands, starting from the moment they are mined. The company hopes this will give cast-iron guarantees to consumers that its diamonds are ethically mined, while also preventing synthetic lab-made diamonds being traded as natural ones.

London-based blockchain firm Everledger is already tracking ownership of thousands of diamonds to assist traders and insurers in monitoring the provenance of jewels and to spot stolen or conflict-zone diamonds. More than 858,890 diamonds have been entered on to the firm’s ledger so far with 40 unique datapoints being collected to create a digital thumbprint for each stone.

Knowing in provable detail the journey and provenance of a product offers a unique selling point for brands.

“This information can be shared with the consumer and verified by a third party for added value from a marketing perspective,” says Mr Grottola.

Ireland Craft Beers and blockchain firm arc-net, for example, allow consumers to trace its beers’ ingredients from source via a QR code. The company has recently partnered with PwC to develop its cryptographic marker and tracking technology further.

Nevertheless, as good as an immutable online ledger is, it becomes less effective if the information entered on to it is inaccurate or only tells part of a products’ story. For example, the system can prove which mine a diamond came from, but not whether child labour was used in the process or not.

This is what Robert Learney, chief technology officer specialising in blockchain and distributed ledger technology at Digital Catapult, which works with Innovate UK to boost digital innovation in UK companies, calls the “bottle tracking problem”.

Translating blockchain, which started as a ledger for financial digital transactions, into the real world is more challenging when the content of the tracked object holds the main value.

But it’s not impossible. Companies can invest in sensors or testing technology, for example, that batch tests products as it tracks through the supply chain, adds Mr Learney.

Blockchain offers a plethora of possibilities for securing, streamlining and essentially cleaning up complex logistics systems, but actually, because of this, getting widespread adoption will be a major hurdle.

“There are people who make money from middlemen, from controlling information flows and corruption, and this is where we may find extreme pushback, particularly in large parts of the world where corruption is endemic,” says Mr Learney.

Adoption of new technology in industries, such as the supply chain sector which has seen little innovation over the last 50 to 70 years, is often an uphill struggle, especially when the technology itself is so nascent.

But with major firms including Maersk backing the technology, and consumers demanding more assurances and authenticity from products, this is likely to be just the beginning of blockchain in the supply chain. 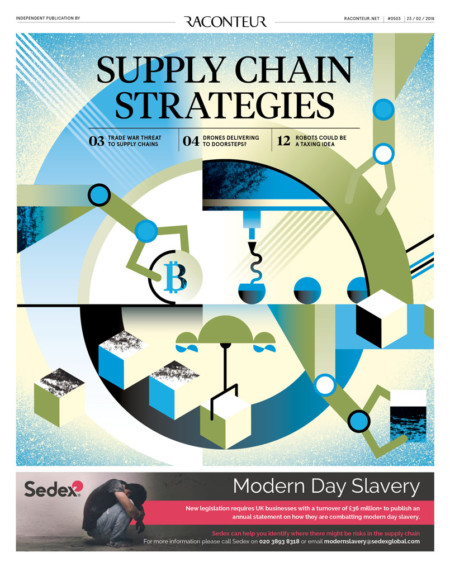