Q: What does RevOps mean to you?

KC - RevOps is about breaking down the silos between different departments and giving business a holistic view of the revenue stream. You used to have marketing generating leads and passing them to the sales team who would protest they were often the wrong people from the wrong companies. Marketing would get frustrated that sales weren’t following up on the leads. The same thing would happen when sales handed over to customer success. The intention is to have one team own the operations across all those teams, and therefore have an eye on optimising the process for both the customer and sales team, removing inefficiencies.

SK - RevOps is a recognition that revenue is driven by a lot of different functions within an organisation and it has evolved over time. In the past it was very operational, focusing on financial analytics and forecasting; today it is very much more strategic. It is about defining, driving and executing on the go-to-market strategy with the ultimate goal of accelerating growth and customer value.

TA - I think of RevOps as the revenue supply chain. You are ultimately defining your market, defining your product and the value proposition for that market, and then serving it to that market and converting it into revenue.

RD - In RevOps we see ourselves as the drummers in the band; the salespeople and the marketers are the lead singers and guitarists. We prefer to be in the background, keeping the beat, ensuring alignment via frameworks and that everyone understands what’s coming next. More than anyone else, we have to know where we’re headed and how we’re going to get there.

RD - With new technologies, we are seeing new approaches that were never previously possible: new processes to build, new efficiencies to be had, new ways to scale without hiring more people. The goal is never just to hire more people, it is to increase the carry capacity, to increase conversion rates, to increase the scale and predictability around what those people can generate. There are also communities like Kirsty’s UK Revenue Operations Network and the Revenue Collective shining a light on excellence.

KC - We see a lot of trends coming over from the US West Coast in the tech scene. RevOps was developed there and people have recognised its success and word gets out.

Q: Is increased revenue a driver of RevOps? According to a report from FunnelCake, when teams are aligned in a RevOps structure, they generate 38 per cent more revenue in 27 per cent less time.

SK - Revenue is an outcome, but customer value is incredibly important, particularly in a software-as-a-service (SaaS) business. It is important we are delivering value to our customers and, if we make sure we are doing that, then revenue will come.

Q: What people do you need to run a RevOps structure?

RD - Early on in a RevOps implementation, companies will recruit an operations person and then throw everything at them. Now when we look for hires, we might look for an insights analyst who has a deep understanding of Python and R. If we are looking for someone to design the processes, it will be a six sigma blackbelt. If we are looking for a systems person, we want a coder who can integrate with Salesforce. As companies feel more comfortable increasing the size of their operations team, that is when job roles start to change.

SK - In the past, our team did order processing, strategy, forecasting and managing the systems. As we have scaled, we have had the opportunity to be able to create more specialisation around some of these functions. We now have a sales systems team, deal desk team and central operations team, as well as the core RevOps team.

Q: What is ABM and how is it changing the marketing funnel?

TA - Marketing continues to change. First there were advancements in martech, then General Data Protection Regulation and now we have what has become one of the buzzphrases of RevOps: account-based marketing or ABM [where sales and marketing agree on the highest-value accounts and these are treated as individual markets]. Instead of the top of the funnel being awareness, it is now identifying the individual market to go after. Look at how Bentley do marketing: they mercilessly select the people they want to buy cars and then almost stalk them around the internet with digital marketing. I also think business to business is increasingly learning from business to consumer; every single sales process is as much about people as it is about the organisational buying centre. Now everyone is a business consumer.

RD - There is much more to marketing than coming up with the ideal customer profile and understanding the total addressable market. Now you work hand in hand with sales on why you want to go after those targets. It is not just around outreach and outbound, but as much about intent data gathered from the internet, and understanding who might be best to see the messaging and flowing them into the funnel.

Q: How do you handle the huge amount of data RevOps generates?

SK - If we go back six years, reporting was very manual and ad hoc; now it is all dashboards and self-serve. It allows us to think more about what the data is saying, rather than spending the time pulling the data down. The more you can automate this, the more time you can spend on forward-looking activities that will drive the business forward. I look forward to the day when I can ask Cortana for the win rate this quarter in this segment and just get that information and think about what to do with it, rather than spending time getting it.

RD - We have everything broken down into this almost infinite loop of the customer journey – buying, bought, renewal, cross-selling, upselling – and there is different data at every stage. Once you have that data, you can start to automate it to make it more efficient and uncover your biggest bottlenecks. If the longest cycles, highest effort and lowest conversion rates come at the request for information stage, for example, then we need to start there first because work on other states will simply not have the same impact.

Instead of the top of the funnel being awareness, it is now identifying the individual market to go after

Q: Are existing CRM systems such as Salesforce suited to RevOps?

TA - I think they are going to become the brains of the system, but not be the entire system stack. There is an emerging skillset within RevOps: the professional SaaS and technology buyer and integrator. Just keeping up with Salesforce release notes is a job in itself; they release about 2,000 pages of updates a year.

SK - Customer relationship management (CRM) is a system of record where you have pipeline and customer data, and you can use it to drive some insights in terms of win rates, cycle times and average deal size. But there are many more tools and it depends on what you need as an organisation. Your salesforce may need business intelligence to help them be smarter in the way they go out to sell to or they may need call-recording technologies to help them coach.

Q: Will the current crisis accelerate the adoption of RevOps, and are companies hiring for RevOps now despite the crisis?

SK - Companies are under a lot of cost pressure in this environment. Part of the responsibility of RevOps is to create efficiency in the sales process.

KC - Definitely yes, we are seeing new RevOps roles being opened and I think it’s due to the vastly changing markets resulting in business intelligence, process and systems becoming more important than ever. I know people owning these areas are certainly drowning in work now. However RevOps/SalesOps can mean very different things in different companies. In businesses where it is more of an admin role as opposed to a strategic one, it can be seen as a target for cost cutting when difficult decisions have to be made.

Q: Many companies are looking to artificial intelligence (AI) for the next generation of RevOps tools. What are your thoughts?

RD - The reason people may be looking outside their existing CRM is because they might not have a firm understanding of what really drives a relationship. If your CRM says you have 12 activities with a particular customer, a rep might claim a strong relationship, but the most critical AI tools will look at not just the quantity but quality of the relationship, the sentiment within those activities. It’s not just that a call happened, but what was discussed, whether there was laughing and so on. And then the best of the best will be able to suggest next best actions based on that context.

TA - It will be quite a while until AI is as embedded into most processes, but that is where the market is going and, once every sales person has a virtual assistant, you are going to need a very specific skillset in your team.

Q: Where do you see RevOps going?

TA - I see the RevOps leader becoming more of an internal chief technology officer, just like a CTO creates technological infrastructure that creates success in a product organisation in what they take to market. I think I will be building a systems and tech infrastructure that will enable a company’s entire efficiency and productivity.

Tom Andrews (TA), Revenue operations manager at PassFort, a seed-funded regtech
startup working on compliance for financial institutions, focusing on the performance and efficiency of the whole organisation’s revenue activities

Kirsty Charlton (KC), Head of revenue operations at Signal AI, a world media monitoring service in real time based in New York and Hong Kong, and co-founder of the UK Revenue Operations Network 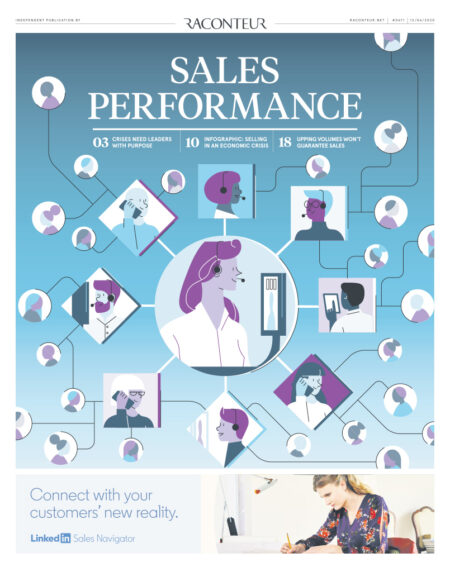 Adapting our approach to sales with IQ, EQ and TQ