As the focus on creating virtual and agile teams continues to grow in many workplaces, a key question has to be why learning and development (L&D) programmes remain so oriented towards the individual.

The issue is if organisations wish to assemble flexible networks of project-based teams made up of different specialisms that are created and disbanded as required, it would appear to make sense to equip them with the skills necessary to work together effectively.

Beth Hood, executive coach and leadership development consultant at Verosa, explains: “While most companies have a budget and strategy for developing leaders and individuals, they rarely give thought or airtime to ‘teamship’ development. But what is overlooked is that they’re bringing together a series of individuals who don’t necessarily have the ability to either work together or deliver collectively.”

What does “teamship” really mean?

A term from British rugby that originated in the early-2000s, teamship covers the range of skills and practices involved in people working collaboratively to complete a project collectively. As such, it goes beyond the notion of simple teamwork, where employees work together as individuals to achieve a certain goal.

Howard Sublett, chief executive at the Scrum Alliance, which provides training to help create agile teams, describes it this way: “It’s the knowledge that I’m better with others and I can’t be as productive solo. My role on the team is connected dependently with the others. It’s the mindset of ‘we’ versus ‘I’.”

But the current low profile of teamship as a concept is more than anything a cultural issue. Because in the Western world, the focus is on the individual rather than the community. In a corporate setting, this translates into recognising and rewarding individual rather than group performance. In countries such as Japan, the opposite is true. But only rewarding teamwork has its downsides too.

“It can impact creativity and people can also fall into a slightly dangerous groupthink, so it’s about getting the balance right and adopting a dual approach: developing your own strengths and capabilities, but also working on your inner team player,” says Ms Hood.

While team-based training programmes may appear expensive on the surface of it, not least because each member rather than just the leader needs to be involved, it does offer a number of long-term benefits.

As Samantha Clarke, founder of the Growth & Happiness School, points out: “When building agile teams, people need to bond quickly to get the job done. You can’t fly solo and be successful; it’s a joint effort and, if people connect and work well together, they solve problems more quickly and are more productive.

“It’s like figuring out how to make the parts of a car work together. All those parts need to be looked after, but they’re all interdependent and, if you don’t look after the whole, they’ll stop working.”

This means that if things go wrong, the team is likely to become dysfunctional with individuals failing to communicate or working in silos. Environments can also become competitive battlegrounds where collaboration is non-existent, or even over-friendly, which means that no one challenges their colleagues’ thoughts or decisions, leading to stagnation. 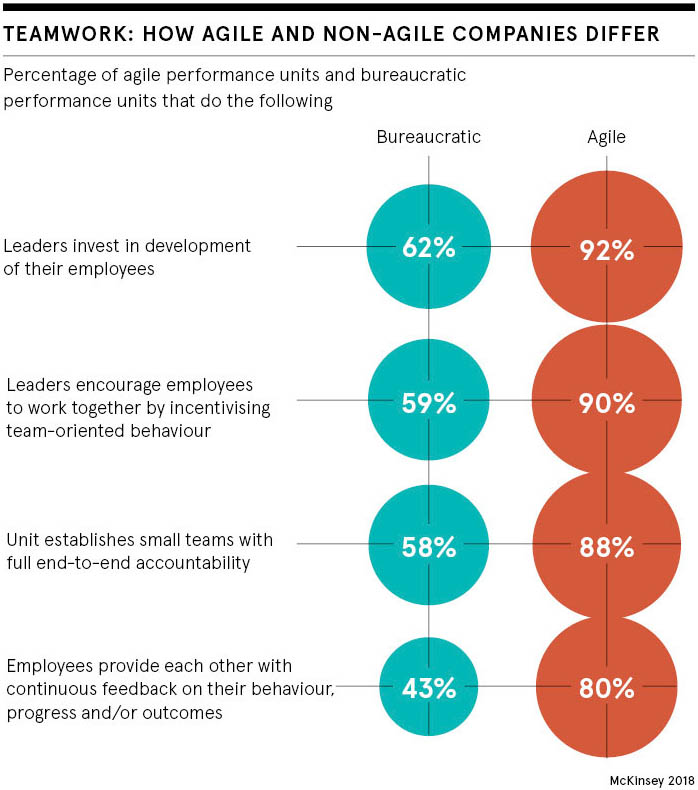 What does a development programme for agile teams look like?

But as Ivor Twydell, co-founder of coaching company Alquemy, says few organisations beyond the police, military and sports clubs are currently investing in strategic teamship programmes to create collective standards of behaviour. The focus instead tends to be on more tactical teambuilding away-days or team-bonding exercises.

“While organisations sometimes talk about the importance of productive teams, they don’t usually invest until they see the cost of complaints and grievances,” he says. “However, if attention isn’t paid to relationships and boundaries, and the way people work with each other, the cost to the business can be significant.”

So what does an effective development programme for virtual and agile teams look like? One element includes psychometric testing to help individual members understand how they and their colleagues’ personality types are likely to operate in a team context.

According to Ms Clarke, these personality types comprise influencers, who speak up and take charge of situations, relationship builders, who are empathetic and create harmony, strategic thinkers, who are more analytical, and executors, who do a lot of the spadework.

But teamship programmes involve working on developing five key team values. These comprise building trust as well as ensuring there is clarity of both communication and the team’s goals. Employees must also learn how to compromise, provide constructive feedback and undertake self-reflection to understand their effect on the wider team.

“It’s easy to say ‘we’re going to do a team away-day and that’ll be our teamship work for this year’, but the skillsets required are often about understanding yourself in a team context, so you recognise how your communication style impacts others,” says Ms Hood. “Another important element is working out how goal-setting happens within teams because understanding where you’re going is always the most important part of any journey.”

Certainly, as workplaces continue to adopt an increasingly collaborative way of working, being able to slip quickly and easily into creating constructive and productive team relationships will become a progressively important skill.

As Ms Hood concludes: “Being able to think in a collaborative way does take practice, but it can be learnt. As virtual and agile teams become more prominent, the learning and development side will catch up with the functional side, despite the current lag.”