Human resources chiefs and their boardroom colleagues are waking up to the power of data to motivate individuals, shape teams and transform business performance. Practices that for years relied on gut feeling are becoming evidenced based, and data-driven HR is creating happier and more productive staff.

A study this year from cloud computing company ServiceNow found 76 per cent of HR chiefs believe their function has become more strategic over the past three years. “Digital technology is a large facilitator of this, with 68 per cent of CHROs [chief human resources officers] expecting advancements to deliver personalised and seamless experiences that will drive gains in productivity and corporate performance,” says Stanislava Stoyanova, HR transformation leader at ServiceNow.

Deloitte’s 2017 Global Human Capital Trends report confirms the high level of interest in data analytics (71 per cent) but says progress is slow. It reports explosive growth in the use of organisational network analysis and ‘interaction analytics’ (studying employee behaviour) to better understand opportunities for business improvement.

Dorothée El Khoury, HR practice leader at strategic consultancy the Hackett Group, France, cites the Cisco pilot, and its outcomes. “Management can see which individual employees are networking with whom, which teams should be collaborating, and identify leaders and influencers.”

More important still, the pilot has the potential to disrupt HR remits and models. “The future of work is about managing teams of teams, rather than individuals,” Ms El Khoury adds.

Not every experiment is successful. Ms El Khoury cites Google’s proposal to support its promotion process using an algorithm. “It was completely rejected by participants,” she says.  Instead, Google crunched the data to identify eight characteristics of a good manager and shared the profile with staff, who use it to improve their performance.

Google has also used data analytics to optimise the recruitment process. After analysing the number of interviews per candidate against numbers of candidates recruited, it discovered that any more than four were superfluous. “That enabled them to cut interviews out of the process,” says Ms El Khoury.

Both these examples, along with the innovative mindset needed to pilot data analytics in new ways – even if not successful – are at the high end of data-driven HR practice. But for the majority, data analytics is directed at a challenge close to the HR chief’s heart: recruitment and retention. An entry point is to deploy the HR staple, the annual survey, in a smarter more continuous way, as Triumph Motorcycles found.

Profiling software called Talent Science, by Infor, assesses behavioural characteristics of employees at HR touchpoints of recruitment and appraisal. It can be linked to projects to ensure a good match between skill and project. “It may be beneficial to populate the start of a design project with creative individuals, while those with greater attention to detail are more effective in later stages,” says Mr Parsons.

Other companies are plugging text analytics into their surveys to access insights that previously would never have surfaced, reports Sarah Marr, data scientist at Qualtrics, an experience measurement specialist. “Text analytics is becoming the new normal for surveys,” she says.

Ms Marr refers to a global brand based in Germany that ran a company-wide survey and subsequently improved its employee offer. “A theme came up in one of the global regions about work-life balance, in response to an open question. The head of the region consulted with the workforce and quickly made an adjustment to the benefits package in that region.”

HR software specialist Workday operates a staff survey weekly on what has become known as ‘Feedback Friday’. The participation rate is 82 per cent and more than 160,000 data points have been shared, according to Greg Pryor, senior vice-president at Workday. The survey revealed employee concern with growth and development, and Workday has introduced agile career workshops and career sprints in response.

Industrial giant Hitachi is another corporation making the employee survey more data-driven, this time by mining data from the Internet of Things. Hitachi research in Japan monitored the relationship between movement, business performance and a staff happiness index. It concluded that in the sales industry performance increased by 30 per cent, and creative people performed three times better when they were happy.

Management can see which individual employees are networking with whom, which teams should be collaborating, and identify leaders and influencers

Making the employee survey smarter is a starting place for many in making HR data-driven. Looking further ahead, a digital ‘nudge’ applied to individuals when thresholds are neared or breached is in the pipeline. Its greatest potential lies in targeting senior management to improve things further down the line, according to Qualtrics.

“If I’m an executive, why would I only interact with people data at scheduled intervals in the year? Why not get a nudge when I hit the threshold of churn, or a certain number of people are leaving, or hiring targets not met?” Ms Marr asks. “The nudge would transform HR from a cost centre to a function that adds value.”

HR may once have been perceived as laggards in IT, but the function is having a digital makeover as employee experience takes centre stage as the driver of creativity and productivity. Ms Marr says: “Companies are getting more traction as HR and data analytics grow, and the feedback – or experience layer – will only grow faster.” 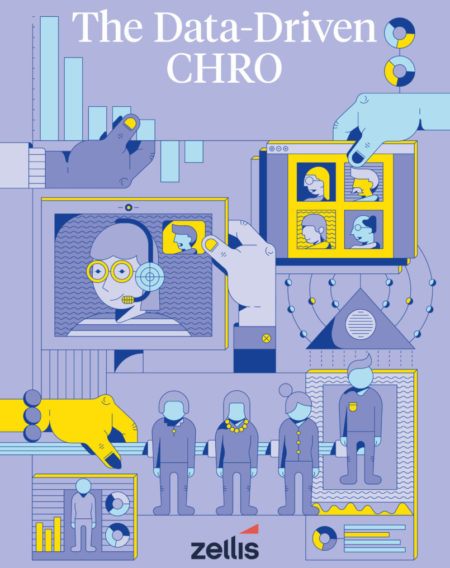 Taking control of the robots

How people data can transform a business

HR discovers the power of data to motivate staff

Expert tips on how to keep a transient workforce engaged

Also in The Data-Driven CHRO