Technology companies have a long way to go in achieving a diverse workforce as women and ethnic minorities often remain under-represented, particularly in senior positions 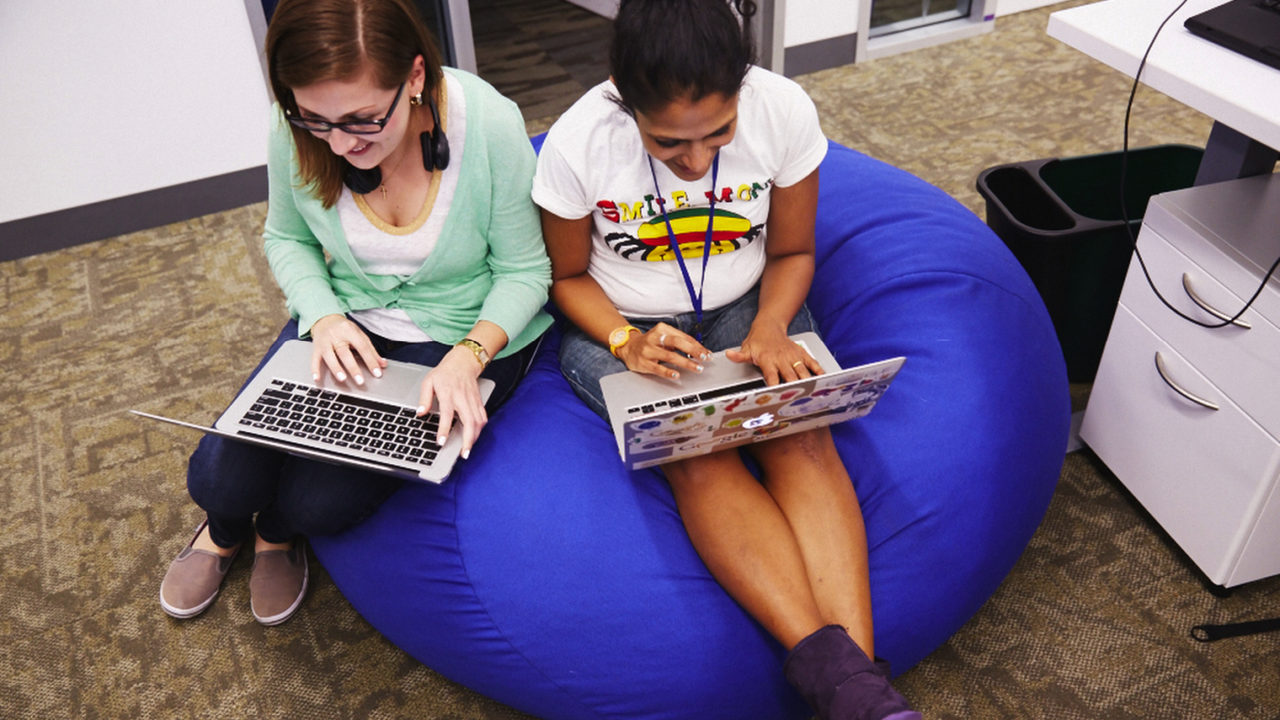 Almost 15 years after the launch of companies like Google, Facebook and Twitter ushered in a new age of truly global connectivity, transforming every aspect of modern life, some of the largest businesses in the world struggle to address key issues of diversity in tech.

In the United States, companies such as Google and Facebook regularly publish diversity figures that show internal male, female and ethnic minority staffing levels. For several years, the figures have shone a spotlight on the extent of Silicon Valley’s diversity in tech challenges. Latest numbers released by Google show that while the percentage of Asian workers increased from 30 per cent in 2014 to 36.3 per cent this year, the proportion of white workers fell by 8 per cent over the same four years.

Many of the companies we speak to don’t view diversity as a priority; it is as simple as that

More crucially, the company has struggled to hire black and Latino talent. The number of employees from these groups rose by only 0.7 and 0.6 per cent respectively from 2014 to 2018. Staff attrition is also highest among the same two groupings. In addition, Google has found it hard to reach levels of gender parity with women accounting for 30.9 per cent of its staff.

Figures released by Facebook, which employs around 25,000 people worldwide, show that the company has performed better on addressing the gender gap, but continues to struggle in other areas of diversity. Facebook’s internal staffing figures show 35 per cent of the company’s global workforce is women, up from 33 per cent in 2016. Women now comprise 28 per cent of the company’s senior leadership, an increase of 1 per cent from 2016.

At Facebook, the number of black employees has increased by 50 per cent, to 3 per cent, and the number of Latinos has gone up from 4 to 5 per cent, but the company continues to struggle to attract minorities. Facebook says diversity in tech figures are to be taken in the context of wider education gaps in science and engineering, where minority communities are traditionally under-represented.

A similar picture emerged at Twitter, where 30 per cent of its leadership is female, but the fewest number of women (15 per cent) are employed in technical positions. 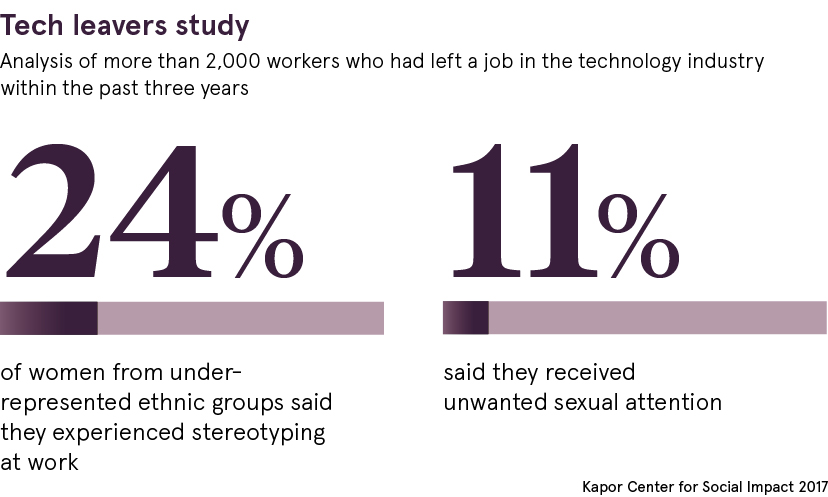 Why are tech companies struggling so much with diversity?

“People who work at these companies tell us one of the recurring issues is the lack of meaningful change in these work cultures,” says Yana Calou, engagement and training manager at Coworker.org, a US-based platform that provides advice on problems including diversity, pay gaps and other institutional challenges.

“One of the most difficult pieces of the problem is the retention level because of the cultural problems faced by some of these companies like gender pay gaps,” says Ms Calou. “In addition, you have everything from harassment from co-workers to all-out threats to diversity advocates, and people standing up for themselves being doxxed [on the internet] and having their lives threatened. Companies and human resources departments are not taking these threats seriously or taking action in meaningful ways.

“Now workers are dealing with allegations of an anti-conservative bias in tech companies, when in fact people have been undersupported or attacked outright about their ideological diversity for simply lobbying for change.”

Across the tech industry, analysts paint an equally bleak picture. A recent report by Recode showed that women were found in only around 30 per cent of all leadership roles. Women also occupy only 27 per cent of all technical roles at major technology companies. The percentages of black and Latino employees in leadership positions is also low at around 4 to 10 per cent.

Silicon Valley’s diversity problems aren’t isolated solely at the entrepreneurial level. Campaigners have long argued that one of the key inhibitors can be found in the predominantly white and male venture capital industry whose financiers are likely to fund promising business models without demanding diversity targets.

Earlier this year, a group of more than 400 leading technology experts and business leaders formed a coalition called Founders for Change to pressure venture capitalists to increase diversity within their ranks. Senior figures at the organisation include the founders and chief executives of companies including Dropbox, Airbnb, Lyft and Stitch Fix.

According to the National Venture Capital Association and Deloitte, the US venture capital industry invested $84 billion during 2017 in more than 8,000 companies. The researchers also found that in 2016 only 11 per cent of the partners at venture capital firms were women. A survey further highlighted there were no black investment partners employed by the firms and only 2 per cent of investment partners were from Latino backgrounds.

Diversity in tech also lacking in the UK

In the UK, a successful sector has likewise failed to address issues of diversity in tech. The UK’s technology sector is worth around £184 billion, up from £170 billion in 2016, according to Tech Nation, with growth outpacing the rest of the economy at around 4.5 per cent between 2016 and 2017. The UK currently employs around 2.1 million people in digital technology.

A Tech Nation report shows women make up only 19 per cent of the UK tech workforce, compared with 49 per cent in all other jobs. There is some good news, however, as ethnic diversity in tech and digital jobs is above the UK 10 per cent average at 15 per cent. But employment in technology also highlights other regional imbalances. The study reveals that 51 per cent of digital workers in the capital are under the age 35 while, on average, 72 per cent are older. 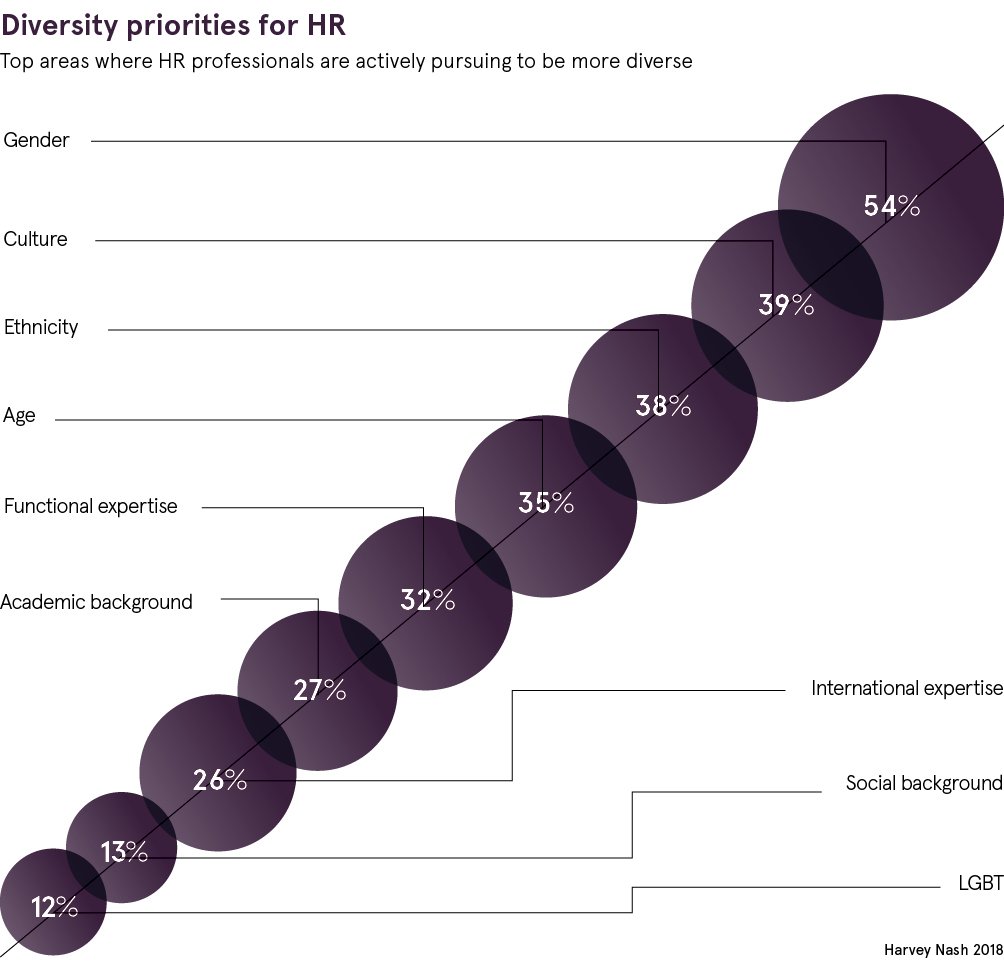 “Many of the companies we speak to don’t view diversity as a priority; it is as simple as that,” says Ashleigh Ainsley, co-founder of the London-based Colorintech.org, which tries to improve access and opportunities for BAME (black, Asian and minority ethnic) technology employees. “What they do is effectively hire quick and diversity is not the rationale they chose to compete on.”

Research from Colorintech.org found that racial diversity in tech boardrooms of the UK’s topcompanies lags behind the US. In a survey of 152 board positions in 16 of the UK’s top technology companies, only four places were filled by an ethnic minority person.

Mr Ainsley says while government could do more to encourage and incentivise minority groups to take up science and engineering subjects at an earlier age, financial backers of startups could be more explicit in setting diversity goals.

“A lot of the larger US companies have chief diversity officers as a role. They don’t seem to exist in the same way in the UK,” he says. “At the very early part of the pipeline, the government needs to be doing more to help people to learn how to code. I would also like more equitable and responsible funding with venture capitalists encouraging the boards of technology companies to aim for a good mix of staff.”

Mark Martin, co-founder of UK Black Tech, concludes: “Lots of tech companies want to be moving things in diversity; it can add value to their services. But unless diversity hits the bottom line on profits, it is not going to be taken seriously. We would like to see some metrics being applied to hiring in senior roles. Ultimately, it will be initiatives like highlighting the ethnic pay gap that push companies towards changing the status quo.”