As National Apprenticeship Week gets underway, BT’s apprenticeship lead explains how the company is using its scheme to build a more diverse workforce and talent pipeline

The pandemic has presented many challenges for young workers. The majority of pandemic-induced redundancies were among those aged under 25, while opportunities for those entering the workplace also declined, with the number of people starting apprenticeships dropping by almost a fifth (19%) between May 2020 and 2021, according to figures from the government.

However, the circumstances of the past two years have only served to highlight the importance of apprenticeships to BT’s senior HR manager Richard Turner, who heads up the company’s apprentice scheme.

“Our apprentices were absolutely crucial to keeping the country connected [during the pandemic],” he explains. “It demonstrated how critical they are to our workforce and infrastructure.”

Opportunities for apprentices on the rise

As National Apprenticeship Week gets underway, there are signs that opportunities for apprentices are improving once more. There are more than 180 different types of apprenticeship schemes to choose from, across 80 industry sectors. 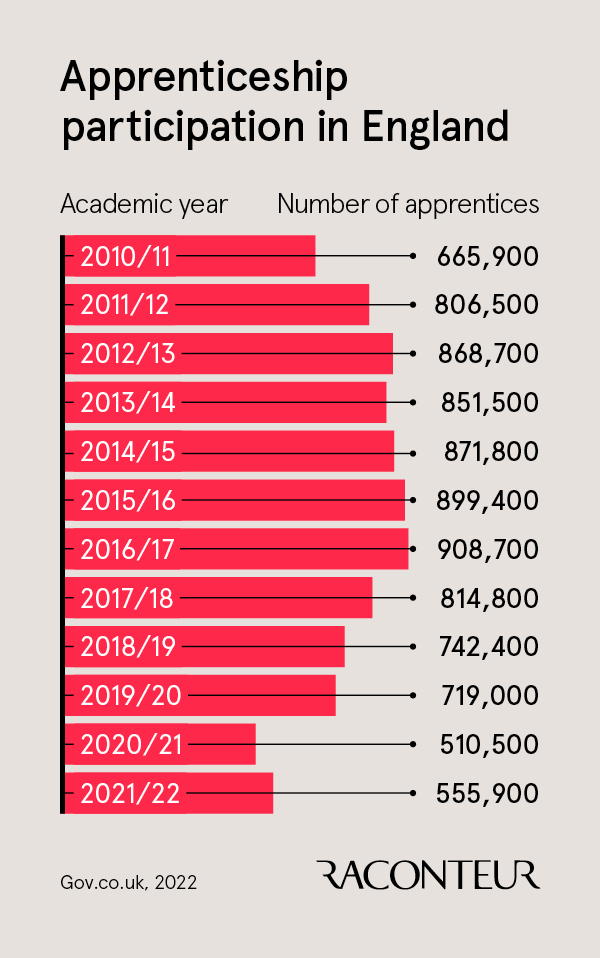 The number of people currently undertaking an apprenticeship has also risen for the first time since the start of the pandemic, with 555,900 people participating in a scheme in the 2021/22 academic year – up from 510,500 the previous year.

But just like universities had to move teaching online, companies also had to adapt. BT did this by changing the delivery of its apprenticeship schemes to blended learning and using platforms such as Microsoft Teams.

“We fully understand that the experience has been very different,” Turner says. “But our management teams have been very good at supporting their apprentices, which has made the change all the easier.”

This combination of factors means that “there is no better time” to be an apprentice, according to Turner. “For the first time, you can honestly get started in any career you’d like via an apprenticeship - and at any age as well,” he adds. “I think that’s a beautiful thing.”

BT offers 59 different apprenticeships across a wide range of business functions, from sales to cybersecurity, data analyst to chartered manager. Turner believes this offers many different routes for people to start their career across a business.

At BT there is a particular focus on developing IT talent as the telecoms company plans to accelerate its delivery of 5G and fibre networks this year. Developing apprentices with the prerequisite skills will be an important aspect of this.

“The emerging skills in the digital and data space are in particularly short supply,” Turner says. “In terms of BT’s strategic direction and growth, people with those types of skills will be absolutely critical but we understand that they aren’t currently out there in the numbers we need, ready to join. You have to build that capability and train them up, so apprentices will be an important element of this talent pipeline.”

There are also more opportunities for employers to get involved in hiring apprentices, with the introduction of flexi-job apprenticeships last year. The new, government-backed scheme allows employers to hire apprentices on shorter contracts, under the standard 12 months. BT is currently exploring how it can deploy its own flexible apprenticeships.

While the Trades Union Congress has warned that this could lead to the exploitation of apprentices, Turner believes there are several positives.

“Flexi-job apprenticeships were introduced as a way for multiple employers to take part in a single apprenticeship,” he says. “If they are well-structured, they could allow apprentices to pick up the best elements of every employer and I’d really welcome a world where more businesses work together to solve skills shortages.”

A solution to recruitment challenges?

The current talent crisis, precipitated by the great resignation, means that employers from almost every sector are struggling to fill open vacancies. Apprenticeships can be an effective way of helping to alleviate some of these hiring pressures.

Turner says: “The skill shortages are well known and employers have to see apprenticeships as their way out of it. It doesn’t matter what industry or field you work in, you’re almost guaranteed there’s going to be an apprenticeship serving your industry.”

Upskilling existing staff and hiring more apprentices are among the top three ways employers are responding to existing recruitment challenges, according to the Chartered Institute of Personnel and Development’s Labour Market Outlook report. As the competition and costs of hiring talent continues to rise, recruiting more apprentices is an option that’s becoming “impossible to ignore” for employers, according to Turner.

Providing opportunities for progression is another important element of BT’s apprenticeship scheme. Since the introduction of the apprenticeship levy in 2017, 100 – or roughly a quarter – of those that have completed their apprenticeships are now in managerial roles. Turner says: “This generation of apprentices are now starting to show real progression in their careers. It’s fantastic to see their achievements.”

Turner will hope that these figures provide inspiration for the next generation of apprentices who come through the company’s programme.