Stephen can’t work. In fact, he can barely walk. He describes the pain he feels as persistent torture. “It started in my shoulder four weeks after the birth of my first child,” he says. “I didn’t know what was causing it, just that the pain was excruciating.”

After a battery of tests, Stephen was diagnosed with facioscapulohumeral muscular dystrophy, a muscle-wasting condition which affects between 2,000 and 2,500 people in the UK.

I can sleep, eat; my mobility is better and I can feel like and be me. Cannabis gives me hope of some sort of a normal life

Stephen, who also suffers from fibromyalgia, which affects his right arm, both hands, lower back, hips, legs and both feet, was given a range of strong pain-killing drugs, including co-codamol, pregabalin and tramadol. But he stopped taking them after being unable to cope with terrible side effects, which put him in a zombie-like state and left him with suicidal thoughts.

Sufferers of chronic pain still have to buy cannabis illegally

It was then that Stephen turned to cannabis. He has been using it for nearly five years to treat all his symptoms. He calls it a miracle drug: “It saved my life. I can sleep, eat; my mobility is better and, most importantly, I can feel like and be me. Cannabis gives me hope of some sort of a normal life.”

But there’s a problem. Stephen uses one gram of cannabis a day to treat his condition and says he has no choice but to buy it from a drug dealer. “I hate the fact that I have to break the law to get my supply and, because this is unregulated, it is very costly,” he says.

However, why are Stephen and thousands of others in the UK still risking their liberty to buy cannabis? Last October, the Home Office changed the law, giving specialist doctors the go-ahead to prescribe cannabis-based medicines legally. Yet, curiously, seven months on, despite there being 80,000 UK doctors who are legally certified to prescribe medical cannabis, not a single NHS prescription has been given out, according to Jon Liebling, chief researcher at the Centre for Medicinal Cannabis.

Mr Liebling, who is also co-founder and director of Cannabis Patient Advocacy and Support Services, says apparent intransigence by the NHS and local authorities has only served to stigmatise and alienate patients.

“We’ve seen doctors being very strongly encouraged not to write prescriptions,” he says. “Patients have been banned from trust hospitals and we know of at least two doctors who have been threatened with being reported to the General Medical Council, or getting into severe difficulty, should they even submit a prescription.”

So why do doctors, who have been licensed to do so, still feel unable to prescribe medicinal cannabis?

Mr Liebling explains: “Firstly, a lack of clinical evidence and a paucity of medical professional knowledge of cannabis and cannabis-based medicinal products (CBMPs) has had a paralysing effect on the NHS. Secondly, because all CBMPs, with the exception of Sativex, which is a fully licensed drug, doctors are not insured to prescribe them, meaning if a patient were to have an adverse reaction, that doctor or the trust, where he or she works, could be deemed culpable.”

However, Royal College of Physicians’ president Professor Andrew Goddard says doctors may be reluctant to prescribe cannabidiol (CBD), with or without tetrahydrocannabinol (THC), for adults with chronic pain because of the weakness of the evidence for benefit as opposed to harm.

“Recent studies show that only 29 per cent of adults with chronic pain would experience a 30 per cent improvement in pain or, put another way, you would need to treat twenty four people to see benefit in one person. When it comes to the harms of those drugs, you only need to treat six people to see significant harms,” he says. “Furthermore, none of the studies has shown whether or not quality of life has been improved.”

Mr Liebling disagrees, doubting current randomised controlled trials which, he says, only test one strain of medical cannabis against a placebo. “If a more varied and nuanced cycle of trials was conducted, which tested varying of levels of THC and CBD together, we would probably see a much larger proportion of adults benefiting; maybe as many as 80 per cent,” he claims.

There are a range of medicines based on cannabis out there

Another limiting factor is cost. According to the Royal College of Physicians, figures presented to MPs on the Health Select Committee range from £500 a month to £25,000 a year. However, Mr Liebling says there are cheaper, and effective, CBMPs available.

The National Institute for Health and Care Excellence is due to publish guidelines in the autumn, which it is hoped will give doctors the information they require to consider prescribing medical cannabis.

Also the University of Birmingham is working with the NHS to produce an education programme, while the University of Bath and University College London have written a review for The BMJ, which provides advice for doctors who may wish to prescribe medicinal cannabis products to treat their patients in the interim.

Tom Freeman of the University of Bath’s Addiction and Mental Health Group says: “In the review, we looked at a range of studies which revealed how cancer patients, and those suffering from MS, epilepsy and chronic pain responded to cannabis-based medicines. The studies demonstrate that medicines based on cannabis and cannabinoids are diverse.

“One of the key takeaway messages is that different cannabinoids have different uses. Take THC and CBD. Several studies have shown that used in combination, THC and CBD can alleviate chronic pain. Others reveal CBD on its own can be used to treat epilepsy, while THC could prove to be an effective drug to treat vomiting brought on by chemotherapy.”

So how long before the stigma attached to medical cannabis disappears and doctors feel confident to prescribe it?

Dr Freeman says: “Now medical cannabis is no longer categorised as a schedule 1 drug, the National Institute of Health Research has announced a specific funding call dedicated to cannabis-based medicines. While research takes time, as a result of these changes in legislation, more funding will be released, the results of which will shed new light on possible future use-cases.”

Mr Liebling agrees that trials are the only way to resolve the impasse and thinks one comprehensive, randomised controlled trial could be enough.

“I believe that if the trial is robust, fully randomised and stakeholders agree it could end early, should results prove conclusive in favour of medical cannabis at an early stage, we could see changes within 18 months, rather than three to five years,” he says.

For Stephen, just one of many hundreds of thousands in the UK who suffer from chronic pain, it’s a change that can’t come soon enough. 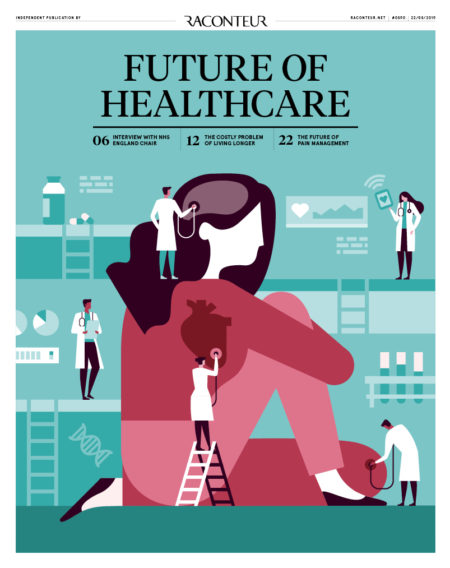