Now we know the dangers of excessive screen time, does the responsibility of protecting against blue light lie with device manufacturers or individuals themselves? 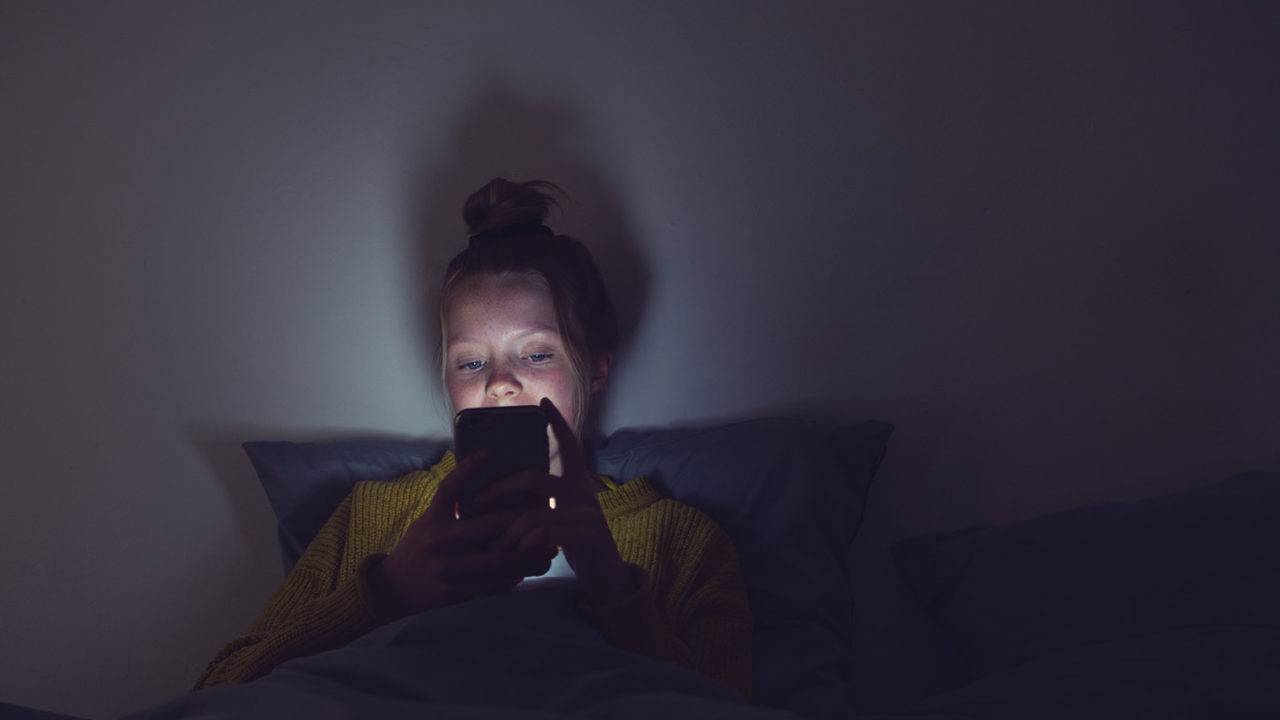 With eyes glued to smartphones and devices all day, the blue light being emitted from screens is affecting sleep quality. The onus is on both manufacturers and consumers to do something about it.

Most of us have probably experienced it. You sit watching a show on Netflix in the dark until 10 or 11 o’clock at night, shut down your computer or turn off your tablet, then climb into bed only to find you have trouble drifting off to sleep and then feel bleary-eyed when you wake up in the morning.

The reason for this is exposure to blue light being emitted from screens. This is perhaps ironic given that blue as a colour has long been associated with clear skies and calm waters, and is used in branding by mindfulness apps designed to help you sleep.

Sometimes we know things are bad for us, like consuming too much sugar, but it can be hard to adjust your behaviour without external support

According to a host of medical journals and academic papers, blue wavelengths can be beneficial during the day as they boost alertness, but at night they alter the internal body clock. The blue light suppresses the release of melatonin, the natural substance the brain secretes to control the wake-sleep cycle, disrupting the circadian rhythm.

Early last year, Professor Dame Sally Davies, chief medical adviser to the UK government, listed blue light in a “daily cocktail of pollutants” whose full impact on our health has yet to be determined. She likened the cumulative effects of light pollution to junk food as sleep deficiency has been linked to a higher risk of cardiovascular disease, obesity, diabetes and even cancer.

Switching off gadgets in this connected world, even at night, can be tricky given the always-on work culture and lifestyle. But there are steps that can be taken to reduce your exposure to artificial blue light.

“It may sound simple, but remove smartphones and other devices from the bedroom. When you hear the ping of a text or a social media notification, it can be difficult to resist the urge to look at your screen,” says Sarita Robinson, senior lecturer in psychology at the University of Central Lancashire. “Other activities, such as reading a paper book before bed, can facilitate a higher quality of sleep.”

Phil Lawlor, resident sleep expert at mattress company Dormeo, suggests experimenting with turning off devices one, two or three hours before you intend to nod off. Setting some sort of cyber-curfew, as tempting as it may be to scroll through your phone, can help to ready your brain for bedtime.

Dr Robinson recommends wearing a fitness tracker to monitor sleep patterns. Though blue light reduces the likelihood of you nodding off immediately, the ability to fall asleep may also be influenced by genetics.

“Just as some people need assistance to adjust their diet or exercise routines, others may need assistance when making adjustments to their sleep behaviours,” she says. “Tracking sleep can help you to see what time you’re waking up and how often sleep is disturbed during the night. This makes it easier to confirm whether the behaviour changes you are making are having a positive impact on your sleep pattern.”

Some device makers are doing their bit to address the menace of blue light. In 2016, Apple introduced Night Shift mode, which softens harsh blue light and makes looking at screens at night less of a strain on the eyes. Meanwhile, in May, Dell announced that it had partnered with EyeSafe to incorporate the blue light technology into its computers. Unlike functionalities that shift the whole colour of a screen, EyeSafe filters the more intense bands of UV and blue light, while guaranteeing to maintain high-quality colour.

Dhruvin Patel, founder of Ocushield, which has developed a range of blue light filter products, believes that manufacturers need to be doing more though. They should be investing more time and research into how they can limit the amount of blue light emitted from screens.

“These things take time. It won’t be something that will be rolled out universally or immediately until there’s legislation on how we use visual display units,” says Mr Patel. “The smarter manufacturers will be making a move earlier, rather than being dependent on guidance from regulating bodies.”

With technology having reached a peak, and limited features being rolled out with each new product release, many people are holding off upgrading their smartphone or device for longer. Until adequate blue light filtering technology is available universally, consumers should be investing in third-party products, such as screen protectors, adds Mr Patel.

Dr Robinson thinks device makers should not only be giving consumers the option of shifting the colour of their screen, but nudging you to turn it on via built-in alerts that remind you of the potential dangers of overdosing on screen use.

“Sometimes we know things are bad for us, like consuming too much sugar, but it can be hard to adjust your behaviour without external support,” she says.

Innovations such as blue light screen protectors and night-light modes are a big step in the right direction, says Mr Lawlor. However, even if all devices and screens blocked blue light, they aren’t the cure-all solution.

“You’re still likely to be exposed to plenty of it before bed, from LED bulbs,” he says. “They’re fantastic for their energy efficiency, but unfortunately they emit more blue light than their halogen and incandescent counterparts.”

Mr Lawlor recommends using any bulbs with a low colour temperature during the evenings. Clinical studies show that immersing yourself in red light doesn’t send the internal body clock out of sync. In fact, red has the least power to suppress melatonin and disrupt the circadian rhythm.

“Simple low-tech solutions can have profound effects,” he concludes. “Yet it’s important to keep in mind that there are many other factors which play into whether or not you’ll get a good night’s rest.”