The most important list in technology is the CB Insights league table of unicorns. These are the tech startups valued at more than a billion dollars. At the top are household names like Uber ($51 billion), Airbnb ($25.5 billion) and Spotify ($8.5 billion).

Scroll through the list and one obvious thing stands out – to be a unicorn you need to be a disruptor. You can’t just imitate an existing business. You’ve got to revolutionise an industry with an innovative business model. Uber is a taxi firm with no taxis. Airbnb turned homeowners into hoteliers. Spotify gave the music industry a way to fight piracy.

This is what every tech startup wants to do – to disrupt an industry and in doing so wind up on the unicorn league table.

The UK already has a growing roster of unicorns. Transferwise shook up foreign currency. Funding Circle let business borrow direct from savers, cutting out banks. The newest entrant to the unicorn paddock is Skyscanner, which pioneered online price comparison in the travel industry.

Now the race is on to found the next generation of unicorns – and there is no shortage of candidates.

“This is a golden age,” says Tom Blomfield, founder of Mondo, an app-based digital bank which aims to reinvent high street banking. “I founded my first startup ten years ago when I was at university. My co-founder quit his job at Deutsche Bank. Everyone thought he was insane. He was an Oxford graduate and was leaving an investment bank to join a startup. Now? The number-one pick for MBA grads is startups. Investment bankers and young lawyers all want to work at a disruptive startup.”

Naturally the prospect of vast riches is a big part of that. When Instagram sold for a $1 billion, a pool of 13 employees shared $100 million. The company had only been running for 15 months. But there’s more to disruption trends than that.

Perhaps the key factor is the simultaneous emergence of a string of new technologies. KPMG polled business leaders to ask what innovations are having the greatest impact right now and interviewees were spoilt for choice. They cited the cloud, the internet of things, data analytics, mobile platforms and apps, artificial intelligence, digital currency and payment platforms, and 3D printing.

Each one of these technologies is young. Each has explosive potential. And each feeds into the other. 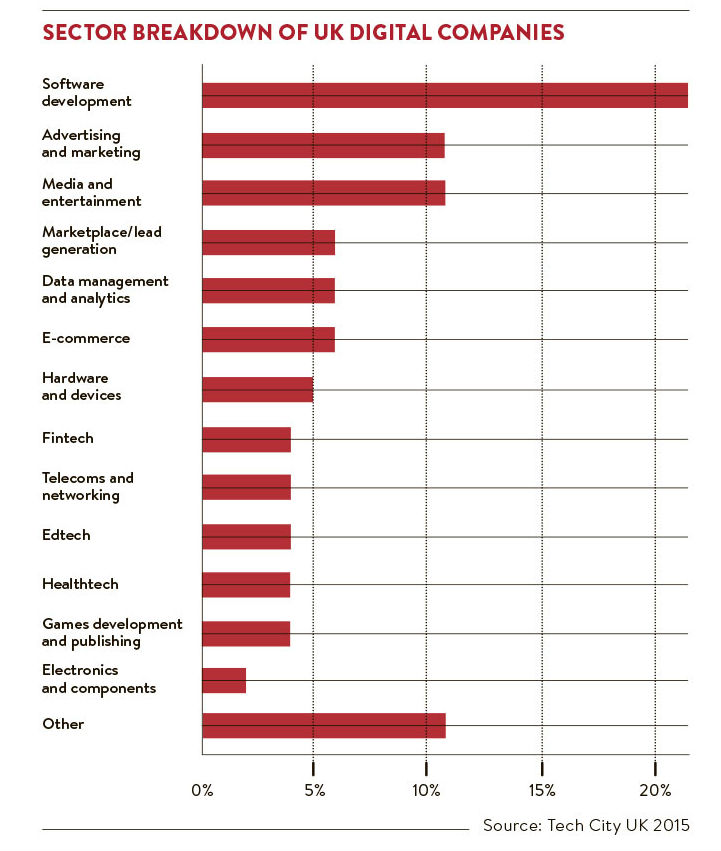 The rise of the cloud has made artificial intelligence accessible to all. Digital payment means mobile apps are commercially viable. The internet of things is generating huge amounts of data, which needs powerful data analytics to provide useful insights.

Best of all, these technologies are cheap to use. Joe Schorge, managing partner of venture capital house Isomer Capital, believes the boom in disruptive tech startups owes a huge amount to the plunging cost of tools. “You don’t need £10 million to get started. It’s more like £10,000. In fact, many cloud providers offer their services free at first. Transaction costs are close to free. You can found a company and run it for next to nothing, then scale it up,” he says.

This low cost of entry, plus the lure of a payday, means the number of disruptive startups is sky high. Investors like Mr Schorge are more than happy to fuel the trend. “We believe in trying lots of ideas,” he says. “The more shots you take, the more goals you score.” He explains that his investment model relies on a small number of companies supplying the bulk of the returns. “Lots will not come to fruition.”

An under-appreciated ingredient in the rise of disruptive startups is the supportive environment for entrepreneurs. Take Property Partner, a novel crowdfunding concept which allows consumers to invest in the UK property market. Founder Dan Gandesha recruited experienced entrepreneurs to help him develop his concept. “Ed Wray, who co-founded Betfair, is an investor and non-executive director,” says Mr Gandesha.

“To found a disruptive business you need people you can bounce ideas off. It takes more than just money. You need guidance from people who’ve been through the phase of hyper-growth. The US has had that for a while and I think we have it in the UK now too.”

Startup incubators and accelerators are soaring in popularity. Level39 in Canary Wharf is Europe’s largest accelerator of fintech companies. High-growth companies are given priority. Crammed into three floors of the One Canada Square skyscraper you’ll find several dozen young companies, each with the potential to reach the magical billion-dollar valuation. Barclays Bank has an accelerator, as does Santander, Citibank and UBS. 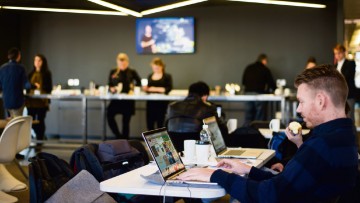 Tax is a lubricant. The Seed Enterprise Investment Scheme (SEIS) and Enterprise Investment Scheme (EIS) offer big breaks for anyone taking a punt on a startup. Property Partner pinpoints tax as a big reason it flourished so fast. “We used both the SEIS and EIS to raise £1.4 million before launch,” says Mr Gandesha. “The right tax scheme means investors can write off losses. They can back an ambitious idea. If nine out of ten don’t work, it’s OK because of the tax safety net. It encourages bold ideas.”

Add up all these factors and you have the perfect conditions for disruptive digital startups. “It’s the cool thing to do,” says Mondo’s Mr Blomfield. “The movie The Social Network [portraying Facebook founder Mark Zuckerberg] was the moment. When Justin Timberlake wants to play a startup founder you know something special is happening.”

Is the trend sustainable? The key metrics point to the affirmative. For example, the internet of things is forecast by McKinsey to have a total economic impact of $11 trillion by 2025. Mobile data traffic is rising by around 60 per cent annually, says Gartner. Some of the most exciting digital technologies, such as virtual reality, have barely got started.

If anything, this is just the dawn of the disruptive startup.

What does it do? Neurological improvement games.

Why so hot? Peak combines the best of science, education and technology to create therapeutic games. Peak’s game Wizard improves episodic memory and has been trialled to diminish the symptoms of schizophrenia. Its brain-training app is targeted at consumers. Peak has $10 million in funding and the team is astonishingly well qualified. Scientific advisers include Bruce E. Wexler, professor emeritus of psychiatry at Yale School of Medicine, and Barbara Sahakian, professor of clinical neuropsychology at Cambridge University. The gaming industry is bigger than Hollywood. Peak hopes to pioneer a bold new future for the sector.

What does it do? Security and management of blockchain.

Why so hot? Blockchain is the underlying technology behind Bitcoin and it’s billed as the most exciting niche in tech right now. Elliptic beat 270 companies to win The Banker magazine’s security project of the year award for its work on Bitcoin. Founded by derivatives trader James Smith and consultant Tom Robinson, Elliptic has developed profoundly versatile blockchain technologies, which can be used for payment, fighting money laundering and storage. It’s early days for blockchain, but if the hype has any substance, Elliptic should have a golden future.

What does it do? Peer-to-peer insurance.

Why so hot? Instead of buying insurance from a faceless multinational corporation, consumers are pooled by Guevara into groups of up to 250 people. Any claim is paid by the group. The idea is to reduce frivolous claims by making it clear where payouts come from. “We are still testing and tweaking,” says co-founder Rich Philip. “The incumbents don’t have the ability to change. We believe we can bring about real behavioural change in insurance.”

What does it do? Adds behavioural clues to passwords.

Why so hot? Ah passwords. So vital, yet so flawed. AimBrain aims to redeem passwords by adding extra elements to the security mix. It watches how you type passwords – speed, pressure and rhythm will matter. It also has facial and voice biometric identification methods. AimBrain’s founders are two Lithuanians who met on a flight to Edinburgh on route to the university. The startup won £350,000 from venture capital fund Episode 1 and a place on Accenture’s Fintech Innovation Lab London programme. It’s a huge global market as the biometric ID market ought to triple in size in the next few years.

What does it do? Zero-commission currency transactions.

Why so hot? Go on holiday and you’ll pay a fortune in foreign currency fees. And while companies can now use Transferwise to cut these costs, consumers are still poorly catered for. Revolut aims to change that. It offers an app and MasterCard which process foreign currency payments at the mid-market rate. No spread, no fees either. Founded by Nikolay Storonsky, a former trader, Revolut is a tenant at Level39 in Canary Wharf, with backing from Balderton Capital. The market is £500 billion annually.

What does it do? Arranges dinner parties for strangers at a host’s house.

Why so hot? Just as Airbnb turned homeowners into hoteliers, VizEat hopes to turn amateur chefs into restaurateurs. Use the website to book a meal at a host’s house, and then show up and dine with other gastronauts. VizEat has competition from Grub Club, EatWith and Shareyourmeal. Disruptive? The French restaurant union Synhorcat thinks so, demanding a clamp down on “uninsured” and “uninspected” restaurants. A sure sign the concept could really shake up the fine-dining market.