Here are six terms every German executive will know, but with no adequate equivalent in the English.

Each one helps explain the success of Germany’s Mittelstand, the galaxy of small and mid-sized family-owned companies, roughly 1,000 to 1,500 of them, which outperform the market, year after year.

They are not always household names, but often dominate a niche at a global level. Koenig & Meyer is the world leader in music stands. Berleburger Schaumstoffwerke makes elastic materials. JD Neuhaus makes pneumatic hoists and cranes.

Together they were an important factor behind Germany’s trade surplus reaching more than €250 billion in 2016, equivalent to 8 per cent of GDP. Britain ran a deficit. Textbooks at the ready…

What’s behind the scientific edge of German companies? A big factor is the Fraunhofer-Gesellschaft, or Fraunhofer Society. It’s a sort of pan-German research institute, which helps promote technical knowledge. It forms a link with universities, so breakthroughs are shared. It conducts its own research. And it’s huge. With 69 institutes across the country and 24,500 staff, most of whom are technical experts, it spends €2.1 billion on research a year.

Almost all the funding comes through contract research. Named after the Munich inventor and entrepreneur Joseph von Fraunhofer (1787–1826), the society invests in fields such as data analytics, life sciences, defence, production and new materials. Then shares the results with German companies. There is no equivalent in the UK.

Back in 1976 the West German government came up with a wheeze to improve employer-worker relations. A law called the Mitbestimmungsgesetz, or Codetermination Act, allows workers to elect representatives to the board. For companies with 500 to 2,000 employees, one third of supervisory board must be elected. In larger companies it’s almost half.  There’s also the Betriebsverfassungsgesetz, in which workers are entitled to create “Works Councils” amongst themselves.

Could Britain follow suit? The Trades Union Congress is demanding a similar act. It points out that 19 of 28 EU states has some provision for workers to sit on the board. FirstGroup, the international transport firm headquartered in Aberdeen,  has had a worker representative since it was founded in 1989 and says “in our experience, the perspectives and input of employee directors aids decision making and demonstrates the company’s desire to hear from our workforce.” The current government contemplated the idea in 2016, only to backtrack. There are no plans to revisit the subject. 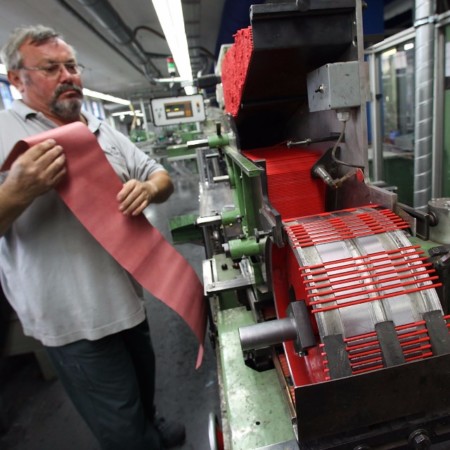 Many outstanding German firms are tucked away in rural villages and towns. The supply of labour is limited. Therefore these companies must have a strategy to develop and retain talent. A recent study of the Mittelstand ethos in the Journal of Product Innovation Management identified the Wertschätzung, or “high esteem” of workers, as a key factor. Pencil-maker Faber-Castell expressed it this way in a newsletter: “The respect shown towards long-standing employees and efforts to keep them, even when the going gets tough, are the hallmarks of our family-owned business: the firm retains valuable expertise, thus ensuring its long-term stability and continuity.”

It’s the same across the Mittelstand. A study of 15,000 Mittelstand employees found 97 per cent found a sense of community and values that matched their own; 87 per cent said they felt neither over nor underworked, and two-thirds believed themselves to be highly valued by their superiors. Many workers think of their employer as a “pseudo-family”.

The worst kept secret of the Mittelstand! The Auszubildende are apprentices, and Germany has a golden record on training new talent. Around 84.2 per cent of all apprentice positions in Germany are supplied by the Mittelstand. There are some huge schemes: cruise ship builder Meyer Werft GmbH employs around 300. This conveyor belt keeps firms supplied with able young workers, and keeps unemployment low even during times of duress. In 2016 EU unemployment hit 18.8 per cent. In Germany the story is very different: youth unemployment has fallen from 15.6 per cent in 2005 to 6.4 per cent.

On Auszubildende the UK is following suit. The new apprentice levy means companies with a wage bill over £3m must spend 0.5 per cent the paybill on apprenticeships and training. The difference? UK firms tend to outsource training. The Germans take pride in doing it in-house.

The loss of capacity after a recession can be crippling. What companies need is a way to scale down without losing capacity. That’s where the Kurzarbeit comes in. Meaning “short time”, the government pays 60 per cent of an employee’s net wage during times of distress, or 67 per cent if they have children. Social security payments are shared between government and employer for six months, then the employer pays all. There is no minimum size of eligible company, and all sectors are valid.  It means companies don’t need to fire workers when the order book looks empty.

In 2009, at the peak of the financial crisis, the government paid out €19 billion. On a web site it runs that attempts to explain the country to outsiders, the German government says  “Although this is a lot of money, Kurzarbeit makes sense. If these people were unemployed, it would be even more expensive for the government.” It adds that “About 1.5 million employees are currently short-time workers. Approx. 400,000 jobs have been saved. That is equivalent to more than 1 percent unemployment.” Again, the UK has no equivalent.

The German approach to fundraising is different to the rest of Europe and the US. Schuldschein loans are a sort of private placement: literally a “certificate of indebtedness”. They date back hundreds of years in Germany. The terms of the loan are flexible – meaning companies get capital without the traumas of a stock market flotation or the arrival of intrusive equity investors.

Schuldschein loans are emblematic of the different approach to finance of German firms. Private equity is less common than in the US or UK – deals in Silicon Valley are 11 times larger on average. Mittelstand firms prefer to self-fund: around 42 per cent of Mittelstand take this path, compared to 23 per cent in Italy. This contributes to a smoother growth path, and less boom and bust.

The example of London-based Powa Technologies, which raised $200m in loans and equity funding and then went briskly went bust would be regarded as madness in the financially conservative Mittelstand.