Guy Standing says he is struggling to keep his feet on the ground, pun unintended, presumably. The professor of development studies at the School of Oriental and African Studies, University of London, is the world’s pre-eminent authority on universal basic income, or UBI, a model for providing every person with an unconditional sum of money, regardless of employment status or resources.

Indeed, promoting the concept of UBI, which is designed to enable a baseline standard of living and address wealth inequality, has been his life’s work. And now, aged 72, after struggling to be heard for the best part of half a century, he is suddenly inundated with media interest and his decades-long toil is vindicated.

Hordes of others, crucially across the political divide, are joining the UBI conversation, owing to the financial dire straits many millions of people are in because of the COVID-19 pandemic. “I had eight interviews yesterday, from eight different countries; it’s just mad,” a weary but willing Standing, who last year, at the behest of former shadow chancellor John McDonnell, wrote a basic income report designed to inform the Labour election manifesto, reveals over Skype from Geneva.

“It’s hard to keep up with all the requests, but it feels like a pivotal moment. I would say the probability of basic income being implemented has gone from 20 to 50 per cent. It’s time for humility, though, rather than having a ‘I told you so’ attitude.”

The coronavirus outbreak and its fallout, which experts agree will be long and painful, has shifted policy proposals that a month or two ago were dismissed as radical and fringe, such as UBI, into the mainstream.

“I believe the economic crisis that is going to come will cause more death and misery than the coronavirus outbreak itself,” says Standing, who co-founded Basic Income Earth Network in 1986. He predicts “widespread chaos” if prime minister Boris Johnson’s government “throws lots of money wildly into job-retention schemes”, mostly because the cash won’t reach “where it needs to get”. 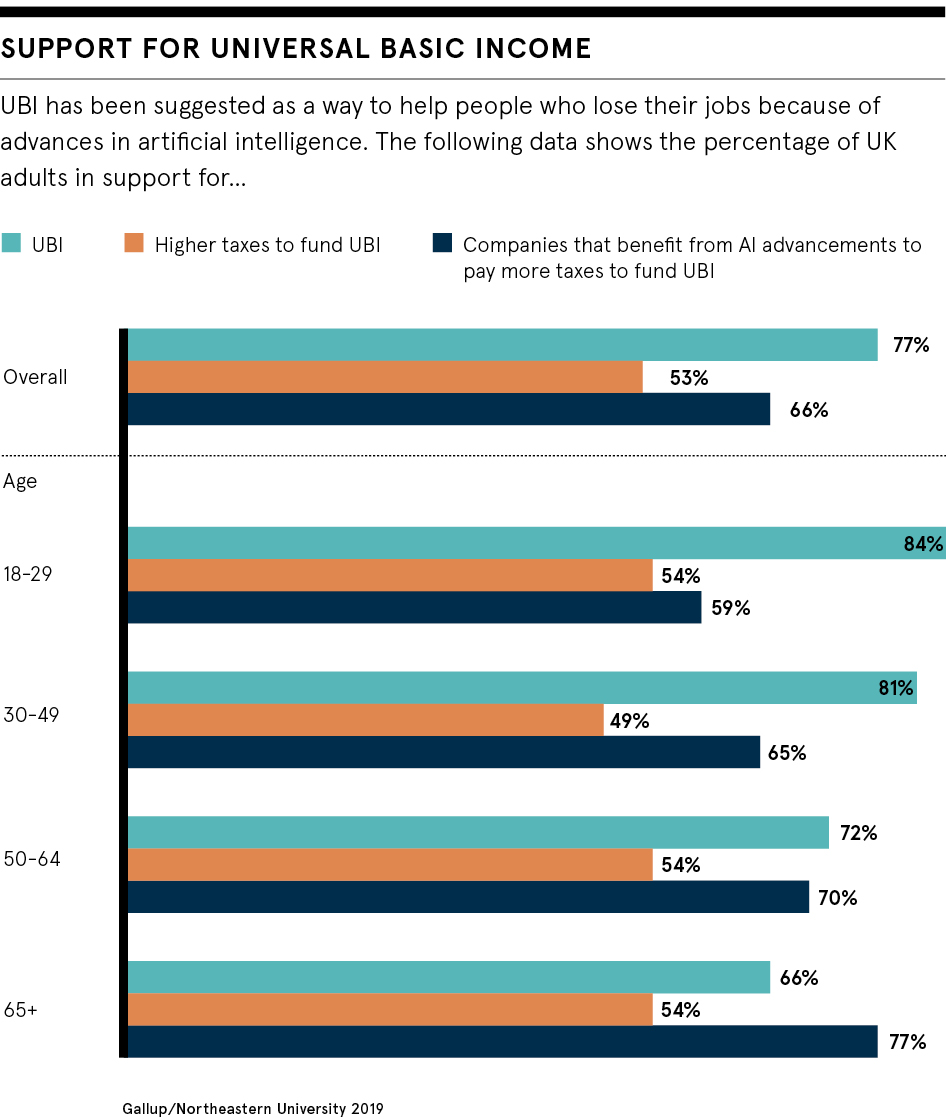 Attitudes towards UBI are changing rapidly. For example, at the end of March, a 170-strong, cross-party group of parliamentarians called for UBI to be introduced in the UK. That was before Spain, in mid-April, became the first country to agree to rollout nationwide UBI. Many other countries, including Japan, Australia, the Netherlands, New Zealand, Brazil and Singapore, have expressed their intentions to follow Spain’s lead.

UBI is generating great interest in America, too, with Democrats and Republicans increasingly viewing it as a viable solution to the significant economic challenge.

“Every day that goes by without UBI means more preventable deaths and more unnecessary suffering,” argues New Orleans-based author Scott Santens. “UBI is important everywhere, but it is especially important in the United States, where before this pandemic even began to overwhelm what we call our safety net, 13 million people living under the poverty line were already getting no assistance whatsoever from the federal government.

He continues: “I’ve always wanted to get UBI implemented to save lives, prevent suffering and upgrade everyone’s wellbeing through a vastly improved system oriented around prosperity and human thriving. Right now, all of those things have gone up an order of magnitude in importance. I’m happy to see more people finally taking UBI as seriously as it always should have been, but at the same time, it’s hard to celebrate anything, when the stakes are now higher than they’ve ever been.”

Sir Thomas More, the London-born Renaissance humanist, hinted at the manifold benefits of an unconditional basic income in his controversial 1516 masterpiece Utopia, about an imaginary, ideal island state. And although there have been some small UBI pilots, notably in Finland and India, the transition from theory to practice has been hard to navigate, not least because questions linger around how such schemes should be funded.

Now, however, at a time when an estimated 1.7 billion adults are unbanked and without access to a bank account, blockchain technology, which promises immutability, decentralisation and transparency, could be the answer to building a UBI mechanism at scale. Dozens of organisations are seeking to both deliver and finance UBI through blockchain tech.

“From a practical standpoint, blockchain offers the possibility of financial inclusion to everyone,” says Yoni Assia, chief executive of investment platform eToro. “In contrast to the traditional finance system, it provides a frictionless way to transfer wealth to those who need it.

“Take, for instance, when the US government announced it will issue money to all citizens via so-called helicopter drops. It has to work with a variety of different banks that each have their own processes and infrastructure to transfer money. It can also only reach those with a bank account. If everyone were given a crypto ‘Fed wallet’, though, they could instantly credit people with tokens to use to purchase goods and services.”

A project exploring blockchain-backed UBI is GoodDollar, a decentralised, not-for-profit organisation supported by Assia’s eToro. “Theoretically, everyone can receive a GoodDollar token into a crypto wallet, not needing to jump through the regular hoops of opening a bank account and effectively helping to reach the unbanked,” he says.

Assia, who believes “wealth inequality is a critical challenge of our time”, concludes: “The current global crisis highlights the need for a new economic order, and I believe it will inevitably advance and accelerate efforts to deliver UBI.”

1. Spain to roll out UBI “as soon as possible”

In the most significant breakthrough in the 500-year history of universal basic income (UBI), in early-April Spain’s centre-left government became the first nation to unveil plans for some form of guaranteed income. “We’re going to do it as soon as possible,” said Nadia Calviño, Spain’s minister of economic affairs.

Prime minister Boris Johnson was open minded about UBI earlier this year, though a parliamentary debate concluded it was not “the best method to tackle the extraordinary situation”. However, considering two million people in the UK have become unemployed since the start of the pandemic, it is likely UBI will be debated in parliament again soon.

Nicola Sturgeon, the first minister of Scotland, showed her support for UBI on the day COVID-19-stricken Johnson was moved out of intensive care at London’s St Thomas’ Hospital. Responding on Twitter to a think tank’s case for basic income guarantee, she wrote: “I’ve long been interested in [the] concept of UBI but [the] current situation strengthens [the] case immeasurably.”

In early-April, Brazil’s president Jair Bolsonaro sanctioned a law that institutes an emergency basic income unconditionally. All adults will receive R$600 (£92) a month. Payments will continue for three months, though might be prolonged, depending on the continuation of the economic crisis wrought by the COVID-19 pandemic.

Jack Dorsey, chief executive of Twitter, announced he would make available $1 billion to fund COVID-19 relief efforts around the world. “After we disarm this pandemic, the focus will shift to girl’s health and education, and UBI,” he wrote. More high-profile tech leaders are expected to follow suit. 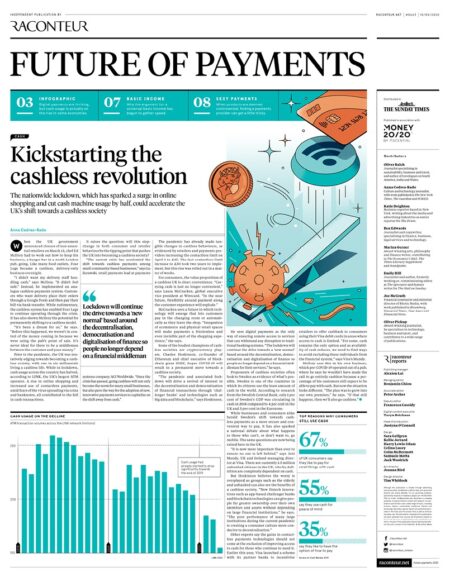