Open banking is coming, but it’s taking its time

Born in a sea of hype on January 13, open banking has so far fallen short of delivering the promised financial revolution. We have yet to see any “killer apps”, dramatic changes in consumer behaviour, sudden doses of competition or tectonic shifts in the UK banking market.

Mandated by the Competition and Markets Authority (CMA), open banking forces the UK’s biggest banks to share their data securely with approved third parties in areas including account information and payments, using a statutory set of application programming interfaces (APIs).

The hope is this will prise open the banking market, encourage new product development, attract new disruptive players, and give consumers more choice and better deals.

Mark Curran, open banking director at Clydesdale Bank parent CYBG, says: “We never expected a revolution. In the medium to long term, open banking is going to have a major impact. It just needs time.”

Jamie Campbell, awareness head at financial network Bud, adds: “A big bang was always unlikely. January 13 was the day the banks wrote the technical aspects of how we were meant to integrate with them. There was always going to be a lag for us to implement on the other side.” 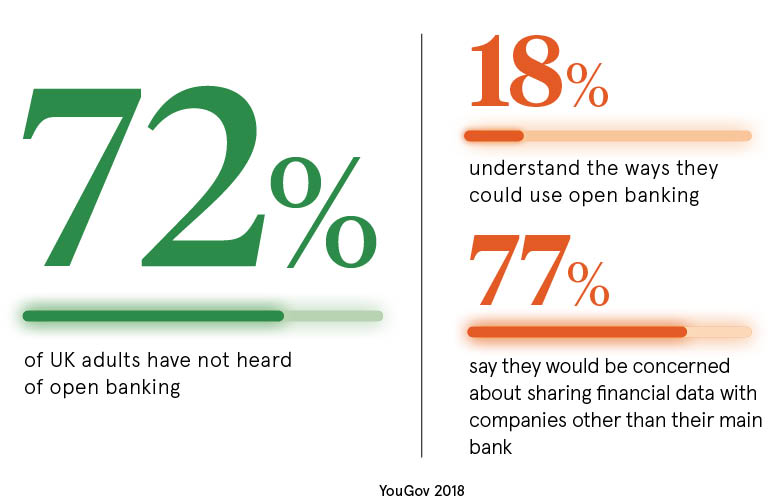 However, some sector observers wonder whether the banks have a hidden agenda to strangle the initiative at birth. “Legacy banks would like to thwart the efforts of fintech companies and challenger banks to take their business,” says Brian Scott-Quinn, emeritus professor at Henley Business School. “They keep to the legal requirements while slowing down the ability of APIs to be useful to those trying to compete.”

Senthilkumar Ravindran, global head of xLabs at Virtusa, adds: “As things stand, it’s not in the banks’ interests to promote open banking. The way the legislation is drafted, third-party providers get a huge amount of benefit, while banks have to give away exceptionally valuable data.” The European Union’s General Data Protection Regulation had further dented banks’ enthusiasm, says Mr Ravindran.

Consumer apathy and scepticism are also delaying things. Mr Scott-Quinn says: “Most consumers don’t really want to share their data, fail to see any real benefit or are concerned their personal data will be comprised.”

Stuart Coleman, chief strategy officer at the Open Bank Project, an open API store, adds: “Most consumers will find open banking scary – the biggest obstacle is getting people to understand how this can benefit them.”

For open banking to really fly, most industry watchers believe the incumbent banks and the fintechs are going to have to collaborate better. Martijn Hohmann, chief executive of digital banking platform provider Five Degrees, comments: “Trust between third-party providers and banks is what’s missing.”

Open banking is a sector on the rise

Behind the scenes, the open banking sector is a hive of activity. Sixty seven firms are using open banking and, between them, they used the technology three million times in July, up from two million in June, according to the Open Banking Implementation Entity (OBIE). Funded by the UK’s nine largest banks and building societies, this organisation was founded by the CMA to create common standards and guidelines for the sector.

“The number of financial services companies wanting to engage with us on API integration has risen dramatically this year,” says Jonathan Lister Parsons, chief technology officer of pension fintech  PensionBee. “This suggests companies are anticipating open banking will eventually become the new normal and they’re trying to figure out what an API-led innovation strategy looks like.” Both Clydesdale Bank and HSBC have already introduced open banking products, respectively B and Connected Money.

The OBIE has been accused of prioritising the interests of banks over those of the fintechs that are hungry for access to APIs. Mr Coleman thinks the OBIE should have wielded a bigger stick on the banks. “It should have forced the banks to connect better,” he says.

However, OBIE trustee Imran Gulamhuseinwala claims this is happening already. “The OBIE will be focused on supporting the banking, credit card, building society and e-money sectors in ensuring the standards are implemented with a high degree of conformance and reliability,” he says.

The future is bright for open banking

Some believe a tweaking of the underlying legislation might loosen the open banking floodgates. Signicat identity architect John Erik Setsaas says the EU’s Second Payment Services Directive should be extended to cover all types of account including credit cards, and that digital IDs should be made much more widely available to ease account opening and migration.

OBIE communications head Emma Byrne insists that open banking was always going to be a slow burn. “We’re far, far ahead of any other country in the world,” she says. “There’s no template or manual for what we’re doing. We’re designing the standards from scratch and in consultation with huge numbers of stakeholders. There are some interesting propositions slowly making their way through the pipeline and we expect to see some real game-changers in 2019.”

Five Degrees’ Mr Hohmann expects to see the first game-changing product by 2020. “Once a few strong propositions come to market, and are successful, consumers will  jump at them,” he says. “Open banking is then going to become among the hottest topics in boardrooms both of banks and non-banks.”