J.R. Willett, a Seattle-based software engineer, is regarded as the founding father of initial coin offerings (ICOs). In 2013, he raised the first ICO, for Mastercoin now known as Omni, a protocol layer on the top of bitcoin and an ecosystem “worth over $2 billion”, he boasts on his LinkedIn profile.

I wouldn’t say it’s as democratic as the crowdfunding model, but it does still allow the general public to get in on the ground floor with a modest investment

Mr Willett’s innovative concept was to launch the ICO “by selling the tokens of the new protocol layer to new investors, raising $500,000 in bitcoins, which within a few months appreciated to over $4 million”. The idea proved incredibly popular in the crypto world, especially after the Ethereum project’s ICO, in the summer of 2014, sold 11.9 million ether tokens to raise $16 million.

Crypto community cottoned on quick to fundraising potential of ICOs

It didn’t take long for startups away from the crypto community to utilise ICOs, realising that it was a more straightforward way to raise funds compared with more traditional methods, such as initial public offerings (IPOs) and through venture capital (VC). Indeed, in May 2017 alone, ICOs raised around $250 million, according to analyst Coinschedule, and in June funding hit more than $550 million, making it the first month that it surpassed angel and seed VC funding.

The crypto bull run that began in late-2017 propelled interest in ICOs, though some opportunists took advantage of the lack of regulation, which led Chinese authorities to impose a ban that September. In the whole of 2017, some 875 ICOs raised $6.2 billion, with a record $1.7 billion reached in December, ICOdata calculates.

Although that overall figure was surpassed by June this year, with $1.5 billion amassed in January alone, the numbers towards the end of the year – $167 million in September and $145 million in October – indicate what On Yavin, founder and chief executive of influential crypto data organisation Cointelligence, calls “a sentiment shift away from ICOs”.

“ICOs are still a relatively new field, but the combination of too many high-profile scams and projects not living up to their promises has left investors wary, and that has hampered mainstream acceptance,” he says. “I think ICOs are here to stay, though. We will see them evolve and be adjusted, but they will not disappear.”

Much easier for startups to launch ICOs than an IPO

Mr Yavin says ICOs democratise fundraising for startups “to a certain degree” and continues: “ICOs are a great way to raise funds compared to other options and the best part about it is non-accredited investors can join in the investments.

“It’s a lot easier for a company to launch an ICO than an IPO. The cost of making an ICO in the early days was a lot more affordable than making an IPO, though it is now a much more expensive proposition. With hundreds of ICOs happening at once, to stand out you might spend as much as $500,000 on marketing and legal costs can be up to $300,000.

“I wouldn’t say it’s as democratic as the crowdfunding model that we’re seeing used more in creative fields and by small businesses, but it does still allow the general public to get in on the ground floor with a modest investment.” 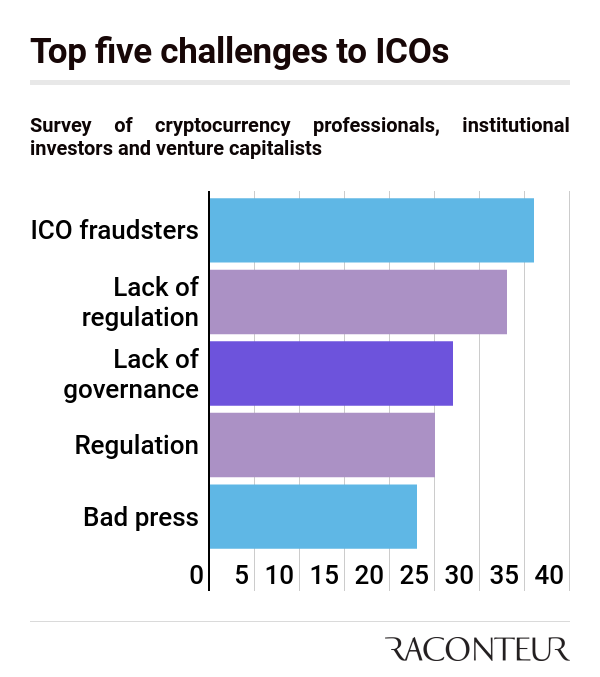 ICOs need to be tightly regulated still, not get-rich-quick schemes

Lars Lien, chief executive of betting startup Luckbox, raised more than $7 million through an ICO in April. “ICOs are a desirable option for startups,” he says. “They provide a relatively frictionless method of raising money from a much broader church of sources, allowing contributors who might not traditionally have been able to become involved. Aside from raising funds, the increased diversity of people interested and involved with your project can be of significant benefit to startups.”

Kevin Murcko, chief executive of cryptocurrency exchange CoinMetro, agrees that tighter regulation is required for the ICO market to thrive. “During the boom, we saw bad actors, overpriced assets and fraud,” he says. “But regulators will ensure that things won’t be returning there ever again.

“ICOs of the future will be on a diet. There’s no more easy money, no more get-rich-quick schemes. Investors are much more sceptical. Money will still flow into ICOs in years to come, but the bar has been irrevocably raised.”

In a final warning to those thinking of launching an ICO, Mr Murcko adds: “If your company isn’t helping to solve a tangible, real-world problem, I wouldn’t expect a penny.”