Sport is ahead of the game in media innovation

In this digital age, viewers expect to be able to gorge on as much entertainment as they please, across multiple devices and on demand. It is easy to lose sight of how far, and how quickly, the broadcasting industry has developed in less than a century. Sport has constantly been at the heart of that evolution.

Colour was first introduced for television coverage of the 1966 FIFA World Cup, for instance, and in 2010 Sky Sports launched the UK’s first 3D channel. Sport continues to keep speed with disruptive megatrends, particularly the demand for enhanced user experience and personalised content, wrought by technology, by embracing change and pioneering new tools that hammer back at the boundaries of possibility.

Indeed, it is just 82 years since the British Broadcasting Corporation Television Service launched, in November 1936. The following summer saw the first sporting event to be beamed to UK viewers as a grainy half-hour package of an opening-round clash at the Wimbledon Championships was broadcast to a few thousand homes within 40 miles of the BBC’s north-London transmitters.

Such has been the rapid transformation, John Logie Baird, the “father of television”, would find the current media playing surface and audience habits unbelievable. The BBC Annual Plan 2018/19 reveals that children aged 5 to 15 spend more time online – on average 15 hours 18 minutes each week – than they do in front of the TV – an average of 14 hours. Further, 43 per cent of 12 to 15 year olds use their smartphones to watch television programmes and more than 30 per cent of all users have streamed live sporting events. 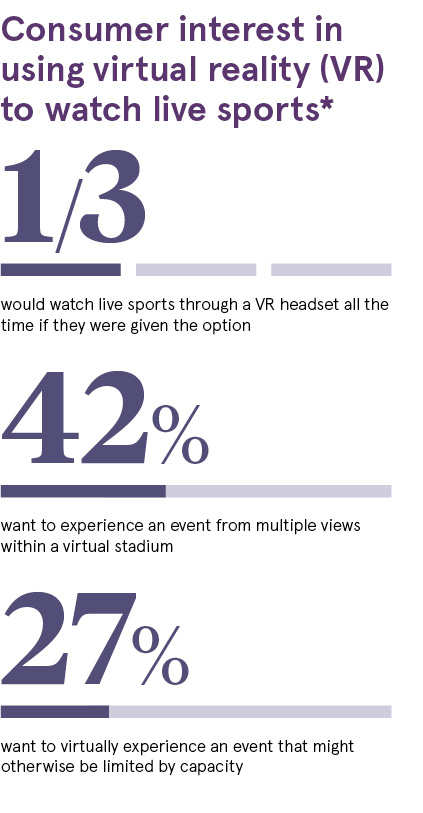 For example, all 64 matches of this summer’s FIFA World Cup in Russia will be broadcast in 360-degree VR for the first time, placing the user in the tunnel, up close and personal with the players, and in tribunes, surrounded by the fans. The best bits will be packaged for dissemination on social media channels, which have become hugely important.

Additionally, Oculus Venues, launched in May, enables users to watch live events, such as sports, concerts, comedy and other shows, around the world with thousands of other people. “VR offers the best of both worlds for sports fans, who want to be close to the action, but can’t physically be there,” says Madhu Muthukumar, in charge of product management at Oculus VR, an organisation acquired by tech titan Facebook in 2014 for $2 billion (£1.6 billion).

“We have carved out an agile content-clip environment on our social and digital platforms, meaning we can react to and celebrate awesome sevens moments as they happen,” says Dominic Rumbles, World Rugby’s head of communications.

“This year sevens content has generated 85 million video views – more than the total views generated across the entire men’s and women’s series combined last season – and we are on track to top 120 million views. World Rugby is continually focused on enriching fan experience by developing new content strands, prioritising innovation, acting on fan data and having fun with what we do.”

It is this data-driven storytelling that will come to dominate sports media, sooner rather than later, predicts Ashok Balakrishnan, senior vice president of technology and product management at Sportradar. Over the last two years his organisation has outbid rivals to become the official data partner for most of the major American sport leagues – NBA, NFL, NHL – as well as NASCAR. By securing those rights it “allows us to be in pole position to bolt on a range of innovative media products”, says Mr Balakrishnan.

It is data-driven storytelling that will come to dominate sports media, sooner rather than later

“We have exclusive rights to a massive amount of innovative data, including player tracker systems,” he continues. “For example, all NFL players have sensors on their shoulder pads and whenever they move that data is streamed to us and put though an AI programme which spits out key findings within seconds. Similarly, in the NBA, players are tracked 25 times a second. We are leveraging that mountain of data and AI to uncover engaging insights and providing fans with a data-driven storytelling experience that they have never had before.

“Take the snap of the ball in an NFL game. We can enable a narrative experience that helps fans understand what has just happened. We can say ‘there is a 32 per cent chance the wide receiver is going to be thrown the ball’, and show which of three possible routes is likely to be most successful, just by tiny movements and our machine-learning algorithms.”

This deluge of data also informs and improves analysis. “The commentators are not in the position to look at millions of data points that are being crunched by a machine,” says Mr Balakrishnan. “It’s a brilliant example of how man and machine can work together to provide a whole new genre of stories and experiences.”