Miners have been digging out stones, ceramics, minerals and metals from beneath the Earth’s surface since the very beginning of civilisation. In all that time, and despite the introduction of a multitude of safety regulations in recent decades, mining has remained one of the most dangerous occupations.

Thankfully, technology is now helping to minimise some of the deadliest risks. Developments in automation and the internet of things (IoT) in particular, are proving to be life savers for hundreds of thousands of workers above and under the ground.

“Nascent technologies like IoT enable miners to improve operations processes, which drives value,” says George Long, digital mining lead at Accenture. “It can be safety or production-based value and also financial. The move to data-driven decisions will give mining operations better control through increased understanding and in a shorter timeframe. They will have the right data, at the right time, to make the right decisions.”

This underground revolution is only just beginning. Mr Long continues: “Ubiquitous information collected in-field, through connected devices, alerting mechanisms and focused use-cases, can drive a culture change in how operations are run and managed.

“As demand in the mining sector increasingly prompts the use of IoT-enabled wearables, safety for workers can be dramatically improved by reducing the number of accidents as well as corporate liability and insurance costs for employers. For example, these solutions can measure worker biometrics, allowing for monitoring of mental acuity, and can be combined with alerting mechanisms to avoid fatigue-related incidents.”

Indeed, Jason Krause of Canada-headquartered Sierra Wireless, highlights a product one of his company’s clients has developed that does just that. The senior vice president and general manager of enterprise solutions says: “The SmartCap is contained in a ball cap, which is worn by workers during their shifts to monitor their fatigue level and detect a degree of exhaustion that may otherwise go unnoticed.

“If any anomalies are observed, the central operations centre and the worker are notified, and the worker can be relieved. By making sure that no one is pushed past their limit, the SmartCap system, connected by the IoT over a cellular network, can save lives.”

Mike Bell, executive vice president of devices and IoT at Canonical, notes that these tech advancements are already allowing mining titans, such as BHP Billiton and Rio Tinto, to “run remote operations thousands of miles from the actual site and, in some cases, even from another country”.

The senior director of IoT solutions at US-based PTC, Mark Gallant, agrees. “Today’s leading IoT solutions can aggregate critical data from a wide variety of disparate sources, which was not previously possible, and then present that data in key contextual ways to the mine managers,” he says.

Ventilation is a key aspect of mining that technology has improved considerably. According to Mr Gallant: “IoT offers even greater safety improvements underground. If you know exactly where the workers are, combined with what equipment is operating in the area and the exhaust emitted, using atmospheric sensors is an absolute must for safety.”

These are exciting developments in mining. However, there is much more to come. For instance, as we have witnessed the adoption of autonomous vehicles that rely on telematics for control and data transfer, top mining organisations are beginning to experiment with autonomous drilling equipment. And given that it is estimated the IoT will consist of around 30 billion connected objects by 2020, there is an industry-wide pressure not to be left behind.

“Clearly there are greater benefits, both in terms of efficiency and safety, to further IoT penetration,” adds Mr Bell. “The use of intelligent cameras, including facial recognition, and radio-frequency identification or RFID will help track the movement of miners though passages. And other geological sensors can be used to create a multi-dimensional model of the mining operation to ensure the real-time safety of staff and equipment.

“In terms of operational efficiency, moving from preventative to predictive maintenance is one of the key benefits of monitoring as much equipment as possible. With operations in remote locations, transport of replacement parts may cause extended outages. As more of the mining operation becomes autonomous, the need to add telemetry becomes paramount.”

“IoT technology will only reduce our dependence on humans in the mining industry. The very nature of this industry is high risk and that won’t change. But new innovations like robotics and automated machines will provide greater visibility and deeper connections globally, and create safer environments for miners, so we will be better equipped to manage that risk in the future.” 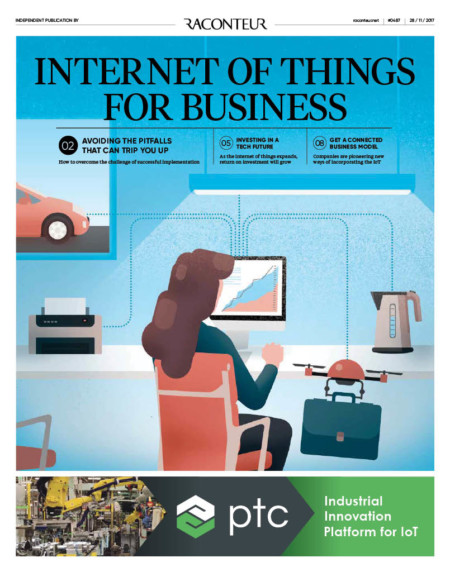 Also inInternet of Things for Business 2017

Avoiding the pitfalls that could stall your IoT project

Investing in a future of smart tech

Also in Internet of Things for Business 2017