It’s not unusual for new technologies to be accompanied by often intense levels of promotion, long before they even hit the market. There is perhaps no better current example of this than artificial intelligence (AI) hype.

With widespread media coverage fuelling debate over its potential impact on society, AI has now expanded beyond the tech industry into the public arena. Given this level of AI hype, it’s no surprise that both established tech companies and AI startups are keen to jump on the trend.

Chief information officers (CIOs) too are keen to take advantage of the so-called next big thing. According to the Gartner’s 2019 CIO Survey, the number of enterprises implementing AI grew 270 per cent in the past four years and tripled in the past year.

AI becomes a solution looking for a problem in some businesses, leading to applications that are not impactful or meaningful in terms of moving the needle for the business

But with so many tech companies claiming to be developing AI-based solutions in some form, is it possible we’re struggling to separate AI hype from reality?

At first glance, certainly, there appears to be an element of firms jumping on the AI bandwagon. A 2019 report from venture capital firm MMC Ventures found that 40 per cent of 2,830 purported AI startups in Europe don’t in fact use any AI in their products.

However, author of the report and head of research at MMC Ventures David Kelnar points out: “Usually, companies are not misrepresenting themselves, they’re being misclassified by others and those misclassifications are sticking.”

Mr Kelnar explains that companies classified incorrectly as AI are typically offering traditional, rules-based software solutions. They include no machine-learning, software that improves with experience, instead of following a pre-defined set of rules.

How AI became a meaningless buzzword

On top of this misclassification, there has been a surge in the number of AI patent filings in recent years. Peter Finnie, partner at IP law firm Gill Jennings and Every, says businesses are using AI in their strapline or marketing collateral, suggesting it constitutes a core part of their technology or value proposition and potentially making them more attractive to investors.

In fact, the MMC Ventures research notes that AI companies attract 15 to 50 per cent more funding than typical software companies.

However, last year the European Patent Office issued fresh guidelines examining the patentability of AI and machine-learning based on the principle that all patentable innovations must not be obvious. According to Mr Finnie, this will render many AI applications “unpatentable and, ultimately, far from innovative in and of themselves”.

But with AI used as an umbrella term for so many different types of technologies, it can be difficult for customers to assess the potential opportunities for their organisation and even harder for companies with real, differentiated AI offeringsto cut through the noise in the market.

Indeed, in the UK, media coverage of AI is dominated by industry promotional events, startups, buyouts, investments and conferences, according to a study by the Reuters Institute for the Study of Journalism and the Oxford Martin Programme on Misinformation, Science and Media.

The report notes: “AI products are often portrayed as a relevant and competent solution to a range of public problems, from cancer and renewable energy to coffee delivery. Journalists or commentators rarely question whether AI-containing technologies are the best solutions to such problems or acknowledge ongoing debates concerning AI’s potential effects.”

Is AI a solution looking for a problem?

So what impact is this AI hype having on how enterprise is adopting the technology? “With so much focus on apparent AI implementations and their benefits, there is a rush to be seen to be ‘doing AI’. The hype is driving higher adoption,” says Lal Hussain, director of IT applications at IT systems integrator Insight UK.

Mr Hussain says this can lead to inflated expectations, which are not always met, and notes adoption is also being driven by the need to be seen to do something.

He explains: “AI becomes a solution looking for a problem in some businesses, leading to applications that are not impactful or meaningful in terms of moving the needle for the business. Teams want to give ‘it’ the ‘AI treatment’, they don’t always know what ‘it’ is, but they know they want it faster and with less human involvement.”

Euan Cameron, PwC’s UK AI leader, observes: “In the enterprise world, AI is in the curious position of being simultaneously overhyped and underexploited.”

However, he argues that it is far more common to see businesses that are attracted by the potential the technology offers, but are slow to invest because they worry they lack the required skills or processes to rollout the technology effectively.

Finding the positives from AI hype

Despite some obvious concerns, there are positive outcomes attached to all the AI hype. For example, the extensive media coverage has helped to elevate the AI conversation within organisations.

“At least one positive aspect from the hype around AI is that it’s not only a technology conversation anymore; it’s very much top of mind for anybody from all business horizons [with] marketing, customer service, legal and operations realising that their job is going to be transformed in some way by AI in the coming years,” says Anne-Laure Thieullent, AI and analytics group offer leader at Capgemini.

“It therefore also forces us to focus on the applications of the technology, rather than only on the technology itself, which is very positive.”

Mr Kelnar at MMC Ventures agrees that the misclassification of AI startups should not obscure the broader, positive findings of the research. “Our analysis revealed that across Europe, one in twelve startups are putting AI at the heart of their products and development plans, that’s up from one fifty, five years ago. We have entered the era of the AI entrepreneur disrupting incumbents by leading the paradigm shift to AI. In 2019, AI entrepreneurship is becoming mainstream,” he says.

So while there is undoubtedly some leaping on board the AI bandwagon, there are enterprises that are realising significant returns from their investment in data analytics, data science, machine learning and AI.

“The noisy market means customers must be active and smart in vetting and evaluating how an AI investment will bring them value, and maintain a relentless focus on the business or product outcomes that are meaningful to them,” says Cloudera’s Ms Mason.

“In general, you should always use the simplest technical approach that will get to that outcome and value. This is even more true in the noisy world of AI.” 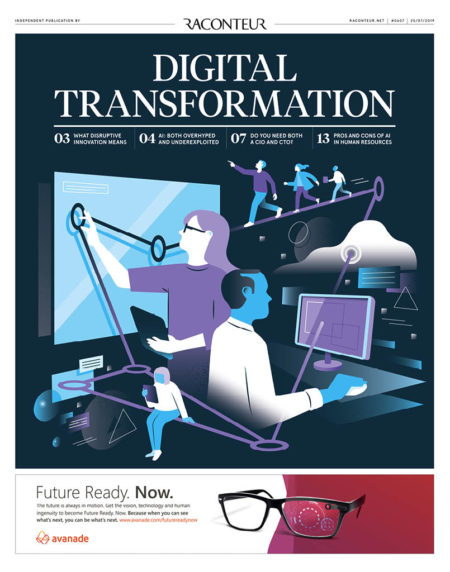