In the footwear department of the new adidas flagship on London’s Oxford Street, a customer takes out his smartphone, clicks on the adidas app and, via the Bring It To Me tech, scans the shoe he has been browsing.

The details come up: it’s from the Predator Precision range by David Beckham. The customer selects his size, requests to try it on, then moves to a different department in the 2,500sqm store.

Granted, it was a one-off, but the moment is representative of the brand’s ambition for its capital adidas high street outlet: to blend technology with physical brand theatre to hit the sweeit spot of an immersive shopping experience.

Embracing the tech-driven experience in store

According to The State of Fashion 2020 report by McKinsey and Company and Business of Fashion, four in five customers shopping in stores browse the internet on their phones.

The report says: “A fully tech-driven in-store experience is currently the exception rather than the rule, [but] players at the cutting-edge are increasingly exploring technologies that could one day become commonplace. For the customer, cutting-edge tools create an immersive experience and aid decision-making on interactive devices.”

Big-box retail needs to be playful and theatrical, and that’s why there will always be a place for it

Dubbed “our most digital store yet” by Hannah Mercer, vice president of global retail and franchise operations, the adidas flagship, which opened in late-October, features more than 100 digital touchpoints and will become a template, through learning and tweaking, for other stores.

“We developed the Bring It To Me technology in-house and it has done so well here that we’ve already scaled it to 45 stores in the United States,” says Ms Mercer, as we tour the four-storey adidas Oxford Street store and pause at the MakerLab, where customers can personalise product with customisation options including flocking, embroidery and artistic heat-pressing.

“We’re already looking at how we can make MakerLab bigger in Paris and New York,” she says. “The high street is not dead. We shouldn’t be worrying about declining traffic in terms of big-box retail so long as they have a great experience.

How to improve your net promoter score

“The retailers that have struggled in a troubling economy haven’t changed enough. If you’re a big-box retailer and it’s full of racks, I’d be at home on the sofa doing my shopping. You have to make it exciting.” 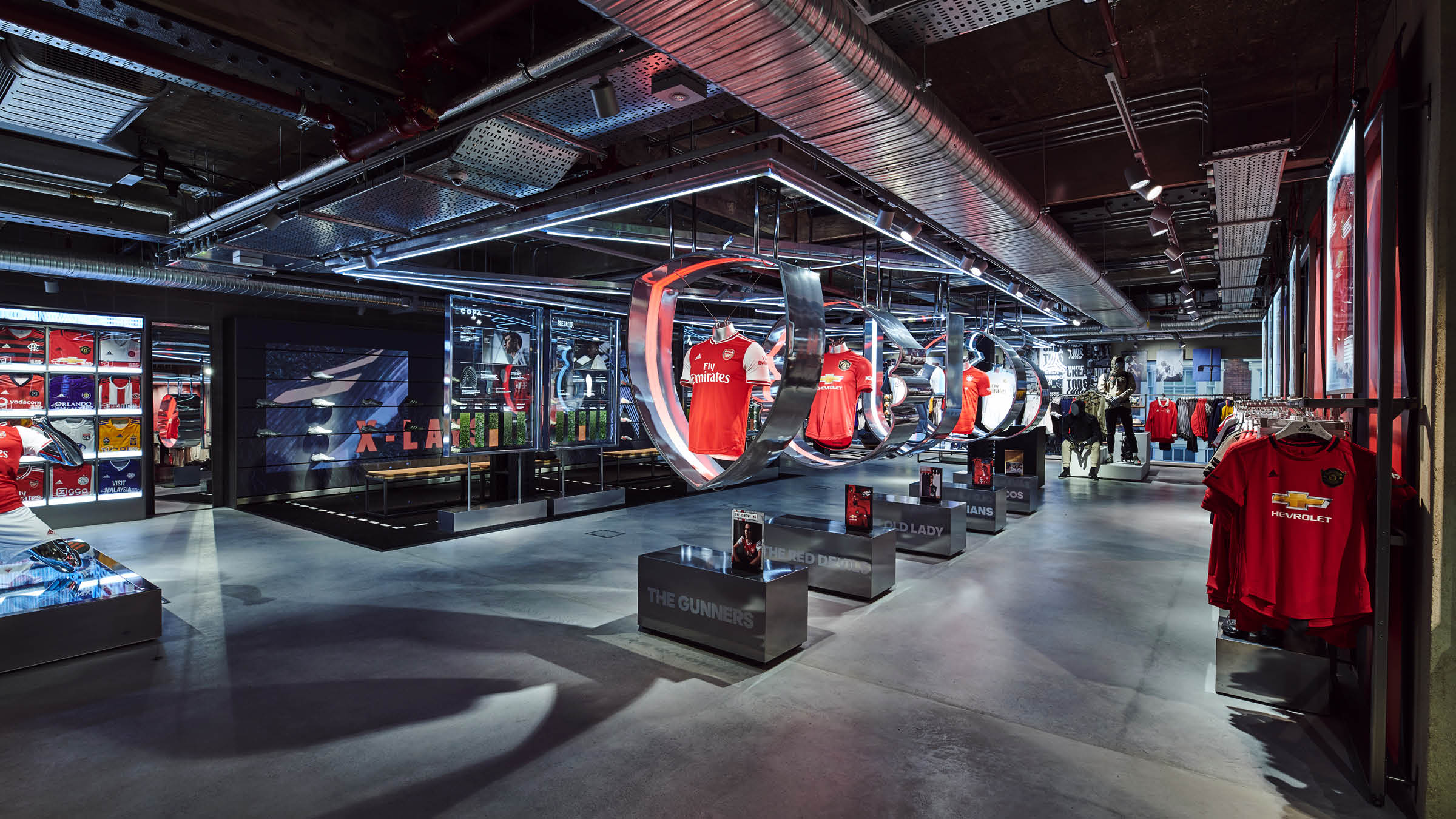 The football department of the adidas flagship on Oxford Street

For Ms Mercer, the measure of success comes down to net promoter score (NPS) and conversion. “Density and linear foot measurement are gone. It’s not about getting the biggest assortment; it’s about getting the best or the most exclusive,” she says, pointing out that adidas LDN’s best-selling product is a simple black T-shirt from its exclusive London range, only available at the flagship.

“The NPS in this store is between 94 and 97 per cent, one of the best in the world. Conversion went from 15 per cent, what most full-price stores along here will be on, to 20 per cent and trading in the first month has exceeded expectations.”

Areas that are smashing conversion rates include women’s footwear and Ms Mercer credits the adidas flagship’s Running Lab, a discreet treadmill facing a giant digital screen of a London backdrop, which changes the faster the customer runs.

Special pods are synced to a tablet and then attached to the customer’s trainers. After a few minutes’ running, the pods transfer data about the running style of the customer and makes footwear recommendations.

Today, it is staffed by Akesha Smith, who also happens to be a 400-metre hurdler. “Customers trust it,” says Ms Mercer. “You have a true athlete supported by technology.” Here, conversion currently stands at 85 per cent.

What makes a great flagship store?

But is the blend of high-tech and experiential retail the preserve of the big brands and their flagship stores?

“Flagship stores are designed to attract a large volume of consumers by offering unique experiences, so it makes sense to prioritise the latest technology,” says Huw Owen, head of Europe, Middle East and Africa at Couchbase, a Silicon Valley-based tech company, whose clients include Louis Vuitton and Tesco.

“However, the majority of retailers, particularly smaller stores, won’t see the benefit of this alone, which is why it’s crucial to apply technology for more operational services, like price checks, payment and inventory management.”

According to software company MuleSoft’s 2019 consumer research report, despite the hype around augmented and virtual reality, consumers place greater value on the basics, with 80 per cent saying inaccurate data, such as stock availability, would make them likely to shop with another retailer next time. Some 44 per cent said they hadn’t seen innovations, such as cashierless stores, mobile-driven in-store experiences and personalised offers, at their local stores.

The ground floor of the adidas flagship, the area the customer sees first, is a clear sign of the brand’s confidence. At the centre, men in white coats stand next to trainers dipping in and out of liquid resin, as part of the brand’s temporary Future of Sport installation.

To the right is the sustainability wall, a permanent installation. The rest of the store is built on a modular system that tells the story of adidas’s pledge to use no virgin plastic by 2024. The store is 100 per cent powered by green energy and has BREEAM-certified (Building Research Establishment Environmental Assessment Method) sustainable materials used throughout.

“We do it because it’s the right thing to do,” says Ms Mercer of the approach to sustainability, which has been embedded in the brand for the last 20 years. “I’ve done lots of big-box retail over the years and here I have an entire ground floor to play with. It allows us to tell a story. Big-box retail needs to be playful and theatrical, and that’s why [as she points across the road to the 110-year-old Selfridges] there will always be a place for it.”