Why hasn’t ESG investment really taken off yet?

In the future, when the planet is much hotter and the seas are clawing at our coastal trading cities, those dealing in finance and capital markets will look back and wonder why we hadn’t got our act together. Why hadn’t we acted quickly enough to address the burning environmental, social and governance, or so-called ESG, issues of our time?

“Business as usual, entrenched ways of thinking, established attitudes, incentives and structures impede the adoption of ESG strategies, and also generate dangerous blind spots for traders and investors that choose to ignore them,” says Ioannis Ioannou, associate professor of strategy at the London Business School. “But in my view, the future of ESG integration is positive.”

The ESG investment process has never been easier

That’s because at no point in history has it been so easy to trade in ESG funds, bonds, exchange-traded funds and other financial products. A record number are available and $31 trillion of assets are now under management, according to the Global Sustainable Investment Alliance. It’s mainstream and no longer a side-show, campaign issue.

“The environmental pressures that the world is facing are only going to get worse. Therefore, even from a pure risk perspective, we expect more people to seriously engage with ESG factors,” says Dr Ioannou.

There’s no lack of analytical tools to assess what ESG scores look like. However, the biggest rub is a deficiency in quality data, definitions and standards. “This can lead to people making ESG evaluations based on superficial information. Many still use ESG factors in a box-ticking way,” according to Alex Edmans, professor of finance, also at the London Business School.

Why is financial reporting so difficult for ESG funds?

The issue of sustainability in financial markets still conjures up images of the Wild West, untamed, unpredictable and with no level playing field worldwide. When it comes to financial reporting, harmonisation is a word bandied around a lot. Transparency is everything, but it’s yet really to materialise at the global level. It’s a work in progress.

“There are many vendors and many different kinds of data,” says Anthony Renshaw, director of applied research at Axioma. “There is also extremely limited data history for ESG scores and a large fraction of scores come from self-reported data. Larger companies have an advantage in ESG reporting since they have deep pockets to make their data as attractive as possible and greenwashing is one aspect of this bias.”

The Task Force on Climate-Related Financial Disclosures is helping. It was set up because of concerns that assets were being mispriced because the full extent of climate risks were not being factored in. But not every company is registered.

“We have seen numerous examples, such as BP, Volkswagen, PG&E, where ESG issues have led to a significant repricing of company valuations,” says Roelfien Kuijpers, head of responsible investments at DWS. 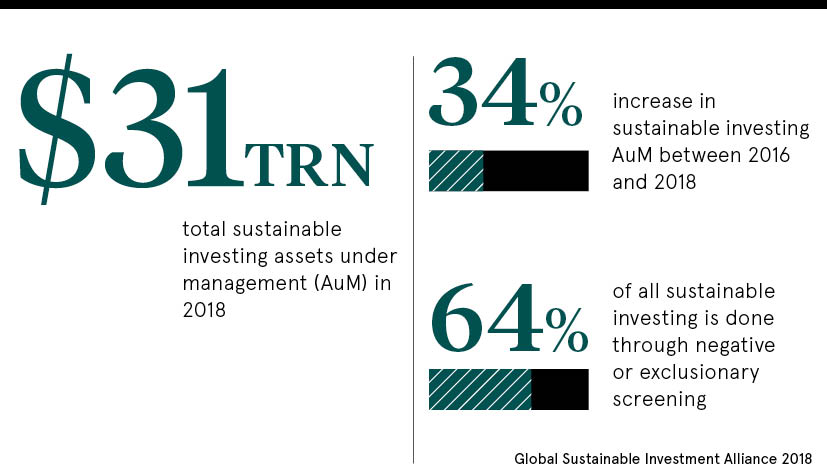 Attitudes on thebig issues such as climate change or fossil fuel usage are shifting, in Europe anyway. “Regulators, as well as the younger generation, are increasingly demanding it,” says Hortense Bioy, director of sustainability research in Europe for Morningstar. “But we haven’t got to the point yet where it’s now more costly to avoid ESG issues. There is no evidence of that when looking at company share prices.”

And that’s why the situation hasn’t reached a tipping point, but after the Paris climate accord and climate emergencies, responsible players are now taking direct action. “We do reserve the right to disinvest if a company is not acting responsibly even after engagement and we can’t make the progress we are looking for,” says Edward Mason, head of responsible investment at the Church Commissioners for England.

In some cases, those active in the financial markets are having to take a different approach, rather than one focused directly on quarterly earnings, as well as day-to-day gains and losses.

“I’m sure there are funds that are taking a much more aggressive approach to ESG. I personally will be surprised if that attracts a large amount of money unless those funds outperform their benchmarks. One criticism of ESG is that because it shrinks the investment opportunities, it’s more likely to underperform. In short, the future will be dominated by funds with a touch of ESG,” says Dr Renshaw.

It doesn’t help that legislation at the state, regional or global level has yet to cause a seismic shift in markets either. Its why traders have yet to move from their shareholder-centred mindset to a stakeholder-centred one.

The United Nations Climate Action Summit on September 23 could focus minds. This is when the UN Secretary General’s Task Force on Digital Financing for the SDGs (sustainable development goals) reports on how we could mobilise financial flows, using technology to answer the biggest issues mankind faces.

“Evolution of the regulatory environment is needed to translate systemic risks such as greenhouse gas emissions into intrinsic risks that will impact corporate finances,” Rodolphe Bocquet, co-founder and chief executive of Beyond Ratings, points out. “For instance, less than 15 per cent of global emissions are subject to any kind of tax.”

Even with a little regulatory reform, combined with public awareness, the industry is already seeing a rise in demand for ESG-focused trade, representing huge pools of capital. People want to pump more money into it. This is going beyond climate disclosure towards net-impact reporting, with positive outcomes.

What is generally agreed is, if this is all to work, there needs to be a shift in focus from short-term to longer-term performance. For a trader that’s a radical shift in strategy.

According to Giulia Christianson, head of sustainable investing at the World Resources Institute: “Business as usual is no longer a viable strategy for ensuring future growth and profitability”.