Making a product stand out on the shelf is about creative marketing, sometimes using personalisation or mass customisation techniques, and often enlisting cutting-edge technology

Brand packaging is getting personal. Coca-Cola’s cans and bottles featuring common first names are part of a growing trend. Scottish soft drink brand Irn-Bru decided to spoof Coke’s personal touch and create bottle labels featuring 56 different Scottish tartan designs, one for each major clan, plus one for the Irn-Bru design. Scottish fans of the drink could seek out bottles bearing the tartan design corresponding to their clan name, whether Gordon, MacDonald or Campbell.

But this kind of mass personalised packaging has its challenges. As Andy Knowles, co-founder of design company JKR which created the strategy, explains: “You have 50-odd designs, though you don’t want people to always find their own clan tartan straightaway, but within a reasonable number of store visits so they become a bit of a collector’s item. So you need to find a way to distribute a random mix of the samples.”

Digital technology is opening up a wide range of creative innovations and boosting the opportunities for playful, personalised packaging

However, the obvious solution of sorting the bottles by hand into random batches in the warehouse then shipping them out to stores was far too expensive and time consuming. But thanks to digital printing techniques, an algorithm was created to produce a reel of labels with a random sequence of designs.

“You put the reel on the filler head and each bottle is filled and labelled as normal, but the designs are automatically varied as the bottles come off the line,” says Mr Knowles.

This shows how digital technology is opening up a wide range of creative innovations and boosting the opportunities for playful, personalised packaging that gives brands powerful new ways to engage with shoppers. “Without digital printing, we couldn’t have done that,” adds Mr Knowles. “The computer is revolutionising packaging.”

Pressure is mounting on grocery brands as cut-throat competition between supermarkets forces prices down, putting a squeeze on marketing costs. Meanwhile, TV advertising is becoming prohibitively expensive. So strong packaging designs are becoming vital as a cost-effective way of giving brands stand-out on the shelf and differentiating them from rivals. But the packs are having to work hard; they not only have to feature clear, iconic designs and logos that stand out, they must contain information about ingredients, health, sustainability and provenance, as well as telling the brand story.

Mass customisation is a way of telling that story and making a direct impact with consumers. However, digital printing technology can be expensive to implement, giving an advantage to the biggest brands that can afford to forge ahead with mass customisation. Nestlé has created a limited edition run replacing the KitKat name on its packaging with the words “YouTube Break” and other phrases such as “Me Time” and “Sporty Break”.

Meanwhile French supermarket chain Intermarché has taken digital printing even further with its own-label orange juice packaging. The juice is freshly squeezed and bottled in-store and the digitally printed labels allow the stores to brand each bottle with the exact time the juice was squeezed, highlighting its freshness – “8.36” or “8.37” and so on. Stephen Bell, executive creative director at design agency Coley Porter Bell, says: “I’m sure we’ll see more of this immediate, on-site customisation from brands in the future.”

One of the most remarkable uses of mass customisation has been by Bud Light in the United States, which has created 200,000 beer cans for a music festival this summer, each can with its own unique design, so no two look exactly the same. The brand used digital print technology from HP and transformed 31 designs into 31 million possible graphics.

The twin pressures to cut costs and become more sustainable are creating a move to lightweight packaging, making goods cheaper to transport and reducing the carbon footprint. Mr Bell notes that some food brands are moving out of glass packaging and using low-weight pouches instead. This was pioneered by baby food brands and is now being widely used by brands such as Loyd Grossman cooking sauces. Mr Bell says that pouches also give a larger design area covering the whole pack, rather than just a label on a glass jar. This opens up more possibilities for strong design. However, some brands are holding back from exiting glass as it has strong associations of quality and is easily recyclable.

There is also a trend towards creating concentrated versions of products such as detergents, leading to smaller packs and less waste. However, the smaller size also lessens the impact of the pack on supermarket shelves. To overcome this, some manufacturers are using shrink-wrap technology on detergent bottles to create a bigger design canvas. Unilever’s fabric conditioner Comfort took this route for the launch of an ultra-concentrated variant this spring, using a shrink-wrap procedure that overcomes the problem of distortion when putting the wrap on a three dimensional product.

Perhaps the biggest trend in pack branding over the past decade has been the quest to make products look authentic and honest as shoppers become suspicious of brands from faceless corporations. Innocent Drinks is a front runner in authenticity with its Smoothie packaging, which makes great use of witty copy and endearing graphics. Many have tried to echo their approach. Adrian Goldthorpe, managing partner at designers Lothar Böhm London, says there is a trend for what he calls “faux-thentic” packaging design, which gives the appearance of authenticity. He cites Bulleit Bourbon, which was launched in 1987 based on a recipe of the founder’s ancestor first made in 1830. “So many brands are playing that game on shelf, trying to create craft, heritage and quality values, that it is almost becoming fake.” But he says consumers are willing to play along with this. “Consumers are quite happy to be fooled because they buy into the stories. If there is a bit of a story, they are willing to accept it,” says Mr Goldthorpe.

Maybe you shouldn’t judge a book by looking its cover, but the role of packaging is to tell a compelling story about the intentions and values of the brand inside.

Innovations in packaging design tend to be slow burn. To find out how mass-market products might look in five years’ time, it is worth examining developments in the high-end luxury sector. Duty free retail is often a testing ground for the latest fancy packaging techniques. 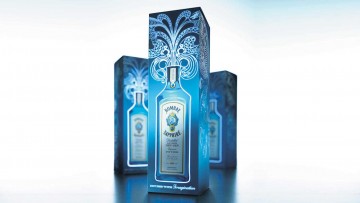 Bombay Sapphire gin has created a limited-edition box pack for duty free that lights up when it is picked up. People tend to pass quickly through duty free stores, so finding a way to make the packaging stand out is vital.

The Bombay Sapphire box features an illustration created in luminescent ink. When the box is lifted up, a current is switched on and flows along different pathways of the design creating a waterfall effect. Such an approach could be used in limited-edition packaging by brands for special occasions such as Christmas.

But some are sceptical about how far the latest technology can be used on product packaging. One area of experimentation is Quick Response or QR codes, which allow users to point their smartphone at a graphic on the packing, then open up a relevant website or app on the phone. Nestlé has started putting QR codes on its products. Codes on KitKat packs link to a website with information on raw materials, manufacturing and distribution of the product.

Meanwhile, developments in the internet of things (IoT), where microchips are embedded in objects to connect them to the internet, look set to transform the role of packaging. Drinks manufacturer Diageo has used IoT technology, placing a chip on a whisky bottle that alerts the manufacturer when it has been opened. A message can then be sent to the owner’s mobile phone with serving suggestions.

The drinks giant also created a campaign in Brazil for Father’s Day using internet-connected whisky bottles. Diageo encouraged people to buy a bottle of whisky for their fathers and to create a personalised film message on their mobiles. The dads could activate the message and watch it on their smartphones via a unique QR code on the bottle.

The days when such revolutionary technology is widely used in mass-market packaging may not be too far away.