What is the role of a CIO today?

The role of chief information officer (CIO) has evolved in parallel with the growing development and influence of technology. As tech has become more important, and now essential for businesses, CIOs have become a mainstay of the organisation. They have switched from being merely a back-end IT executor to a strategic and influential member of the board tasked with delivering growth.

But while businesses and boards are increasingly aware of the benefits of tech, there are some industries that are further along in how they’ve embraced technology.

“Retail has been completely disrupted by technology, while others such as construction haven’t historically been as affected, but now everything is becoming disrupted,” says Richard Steward, former CIO of advertising business Clear Channel and UK consumer goods firm PZ Cussons.

The Bank of England’s executive director and CIO Rob Elsey agrees that technology is becoming a larger player in the majority of organisations.

“We’re starting to see a changing age in technology in most financial services organisations when tech is the thing that can make a difference,” he says. “So in general you’re seeing the CIO role changing; it’s becoming a lot more influential because discussions you’re having with the board are a lot richer.”

CIOs must be board members first and technologists second

There is no point of a CIO being on the board, however, if their voice isn’t heard, ensuring technology can make a meaningful impact on the business.

“You need to lead the conversation with the business first and have a broader set of skills including the need to understand financials; you can’t just sit in the meeting and wait until technology comes up and shut up the rest of the time,” says Mr Steward.

“You have to be fully contributing the rest of the time and you need a CIO that is a business leader first and not a technologist.”

To do that, Mr Elsey suggests CIOs need to understand the business drivers, the threats to the organisation and the opportunities. Crucially, he says, the CIO needs to be able to “demystify technologies to the board”.

“If you talk about technology for your own sake, making it sound very complicated and not understanding business drivers or how the environment is changing then you’ll have a little voice because your opinion is not appreciated by board members,” he says. “There is an opportunity for CIOs to have a bigger voice around the table and many CIOs understand that.”

But Mr Steward believes that building relationships with the board can be a double-edged sword. “You need to have relationships so you can collaborate with board members and move the organisation forward, but you also have to have a certain level of credibility because non-executive directors are there for a reason; they’re independent and can question what the chief executive and other board members are saying, and bring their external experience to the table,” he explains. 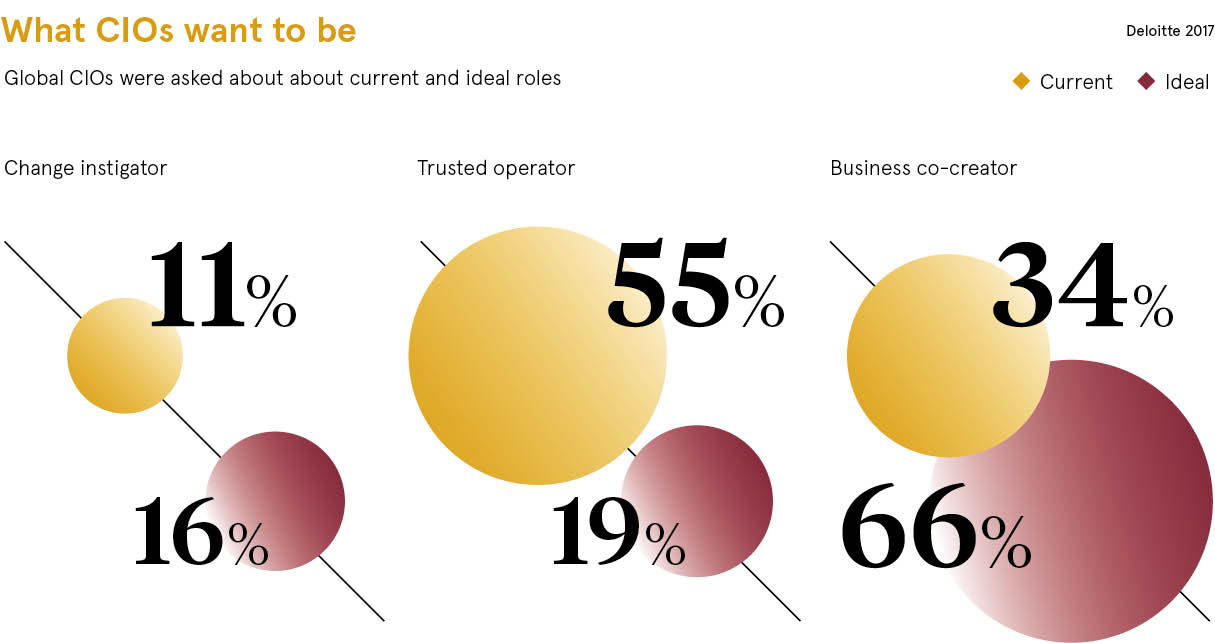 The CIO provides capabilities that the CDO can build on

It’s also essential for the CIO to grasp the opportunity that arises when technology naturally forms a part of wider discussions, particularly with the rise of the chief digital officer (CDO).

General Electric (GE) CDO Bill Ruh, who is also chief executive of GE Digital, says the CIO owns internal productivity while the CDO is more about product management and allowing digital capabilities into the products and services a business sells.

“The CDO will count on the CIO to provide a set of capabilities that can be built upon to help build those portfolios out and I think that’s the way it will work eventually,” he says.

But if the CIO is relied upon by the C-suite to merely provide a set of capabilities, might they be siloed and perhaps not have as much influence within a business as the CDO?

“I think that’s the way it works at the moment in many cases, but it doesn’t have to be that way,” says Mr Ruh. “I think the chief executive of a business has to want the CIO to enable the business, to have a seat at the table and to understand what they’re trying to accomplish, while the CDO will work with the CEO on their portfolio plan of what they need,” adding that organisations need to be careful not to duplicate duties and functions for CIOs and CDOs.

CIOs must encourage mindset change among the board

But Mr Steward believes that eventually all these responsibilities will come under one tech leader and, no matter what the role is called, the IT leader in the organisation has to encourage a change in mindset among the board. That shift is from thinking of IT as a way to minimise costs to increasing value.

“If you invest in the right technology, you can create even more value in the organisation,” he says.

But taking this a step further, technology needs to be considered as part of a natural answer to business questions. “We get hung up too much on the IT side of things; it’s about what you’re trying to do in the business,” Mr Steward adds.

It’s clear there is a need now more than ever for the CIO’s voice to be heard.