How to rebuild trust in the role of the CFO

The past decade has seen a phenomenal change in the role of the CFO. Whereas once the tasks revolved around control and compliance, it has become a far more strategic role, with stakeholders from the board to the shareholders to the consumer demanding more of the CFO: more data, more insights and more forecasts. Oh, and faster as well.

In such a swirl of responsibility, it is easy to lose sight of the core competency of trust, which  at the very least can be seen as a soft, woolly factor.

But CFOs who fail, or are perceived to fail, to uphold the highest standards, will damage the companies they work for, according to research from consultancy Accenture. A recent strategy report found that a $30-billion retail company experiencing a material drop in trust stands to lose $4 billion in future revenue.

The ability to build trust is increasingly crucial

“The notion of trust hasn’t changed,” says Ambrose Shannon, CFO and enterprise value lead for financial services at Accenture. “Stakeholders have always looked to the CFO to be the guardian of the business.”

Sadly, UK companies are experiencing a higher drop in trust compared with the global average: 61 per cent versus 54 per cent respectively, according to Accenture. More than half (54 per cent) of the 7,000 companies scored under its Strategy Competitive Agility Index, which quantifies the impact of trust on a company’s bottom line, experienced a material drop in trust at some point during the past two and a half years.

“Following the financial crisis, trust has been more important than ever in the context of the role of the CFO,” says Ratika Fernandes, head of the UK CFO programme at Deloitte. “Prior to the crash, boards were looking for CFOs who had a strategic lens, with the focus largely on growth. Post-2008, CFOs with a strong technical background were in high demand.

“This has shifted in recent years, largely due to the significant socio-economic, technological and political changes, which have caused boards to look more holistically at the CFO role.”

Tech and innovation are key in the role of the CFO

Trust may seem a vague concept, but we all know untrustworthiness when we see it. And in a world of increasingly knowledgeable and demanding consumers, we are more likely to be able to spot it if it’s there; the CFO is under more scrutiny than ever and has to be on top of a much broader range of topics. With even less room for error, the canny CFO uses technology to provide pinpoint accuracy on issues ranging from quarterly earnings forecasts to industry trends.

“People tend to look to CFOs for facts, but also trends. They need to employ predictive analytics and keep refining their ability to predict over time.” 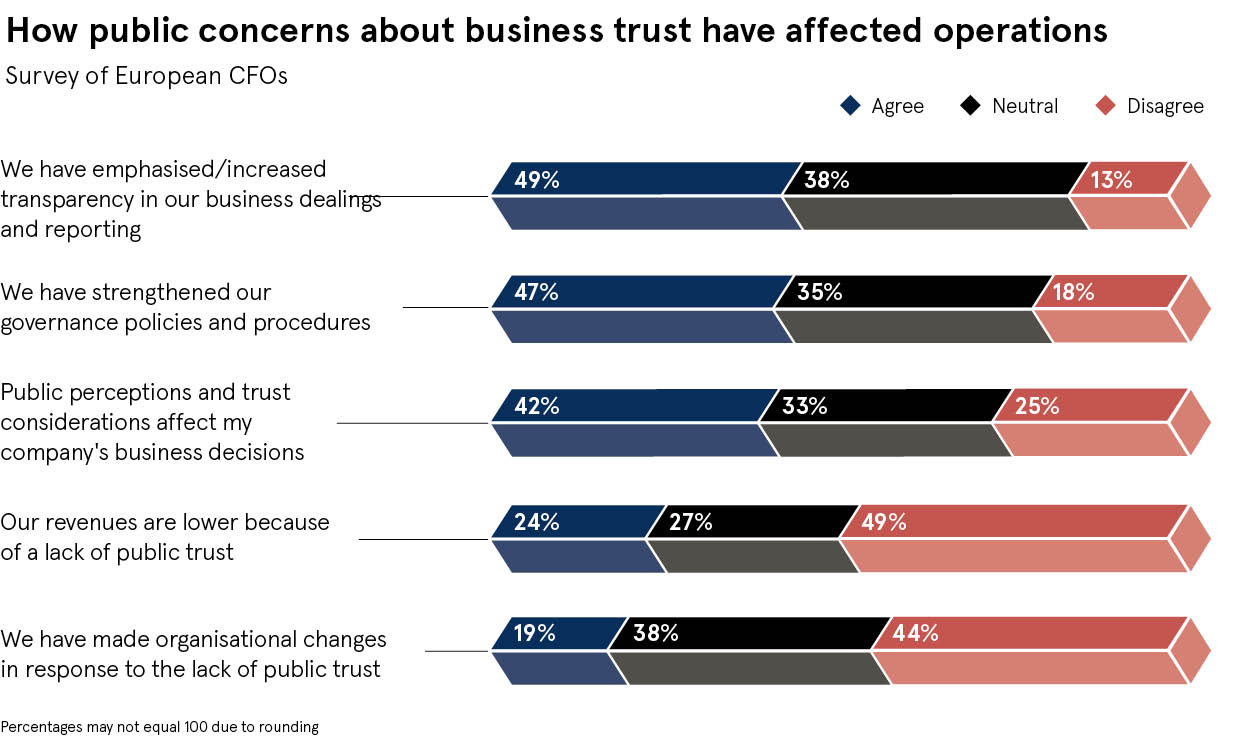 In a world where employees and consumers have more choice than ever, companies need to project an image of trust both within and without. Trust matters to employees as much as to shareholders. “If companies do not nurture and build trust, they will face difficulties in engaging their staff, and attracting and retaining key talent,” according to a recent report, Eight Executive Trends, from executive search consultants Page Executive, which argues that one of the key roles of the CFO in a changing world is to preserve trust.

“CFOs have become champions of innovation and leaders of change, and their sense of people management is increasingly important,” the report says. “When enacting change, CFOs have responsibility for influencing their employees’ mindset to win the wholehearted trust of their workforce. CFOs need to be transparent about the vision of their function to inspire trust within the business as a whole.”

And that is no longer limited to a once-a-year publication of the annual report. Instead of the traditionally backward-looking role of the CFO, stakeholders are looking for leading indictors of performance, such as numbers of customers month on month, how they were acquired and acquisition costs per customer.

Responsibilities may extend beyond the traditional finance department. CFOs are increasingly the public face of the company performance, and need to be on top of issues such a corporate and social responsibilities or cybersecurity. A data breach could mean an organisation’s trustworthiness takes a serious knock; in October, the Court of Appeal decided supermarket Morrisons was vicariously liable for a serious data breach by a disgruntled employee. A senior IT internal auditor at the company downloaded and made public personal staff data; he had been given access to the data as part of his job. The individual was convicted of fraud, but Morrisons has been held liable for trusting the individual.

Ultimately, the role of the CFO and the finance function requires the highest level of trust. Deloitte’s Ms Fernandes concludes: “In my conversations with chairs and CEOs, they say when they’re appointing a CFO they’re looking for attributes that aren’t listed on a CV, characteristics such as leadership and influencing skills, strength of character, negotiation skills, and ethical and moral values. It all boils down to the inherent need for stakeholders to have implicit trust in CFOs of the world’s largest organisations.”