When Michael Detlefsen was at the start of his career in in the early-1990s, most chief financial officers (CFOs) learnt their wares in accountancy training. But as the nature of the job has changed, so too has the profile of the typical CFO.

The CFO has to be involved in all aspects of the deal and the target’s business model, and needs to be able to realise the synergies between the two companies

As more companies turn to mergers and acquisitions (M&A) as a way of implementing corporate strategy and achieving growth, the modern CFO needs to be more than just a numbers person.

“CFOs have become critical to a successful M&A process, whether divestitures or investments,” says Mr Detlefsen, managing director of Pomegranate Capital Advisors in Toronto, Canada. “The CFO has to be involved in all aspects of the deal and the target’s business model, and needs to be able to realise the synergies between the two companies.”

With M&A activity on the rise in many larger companies, they are increasingly stepping in to play the role of the corporate salesperson and dealmaker given their ability to understand how two businesses can mesh together.

Data from Thomson Reuters shows global M&A activity is soaring, with $3.3 trillion of activity in the first nine months of 2018, the strongest for the period since records began in 1980. Meanwhile, research by Willis Towers Watson shows that, between 2008 to 2018, 55 per cent of companies engaged in M&A deals worth $100 million or more saw share price growth that outperformed the market.

“With organic growth rates shrinking, you’re not seeing rapid growth any more, so the only way to grow is through acquisitions,” says Mr Detlefsen, adding that the CFO’s role throughout the M&A process is critical to ensure its ultimate success. “Valuations are high, so the only way to make this work is to integrate synergies to get maximum value.”

Indeed, a major challenge during the M&A process is to achieve successful integration both in terms of finances and personnel. However, Mr Detlefsen estimates around 80 to 85 per cent of acquisitions don’t realise the numbers that were forecast. Therefore, a good CFO will begin the integration planning early in the M&A process, forming partnerships across both businesses and gaining an understanding of where synergies can be made.

Kwaku Andoh, partner at international law firm Cohen & Gresser, says the CFO’s role starts before the decision is made to undertake the transaction and it’s their responsibility, along with the corporate M&A team, to ask the tough questions that the line of business championing the deal may have glossed over.

“Given how important acquisitions can be to a company’s bottom line, it is now incumbent on any CFO to see his or her role as encompassing not just the numbers per se, but also forming a view of the strategic value of a potential acquisition or disposition,” says Mr Andoh. “A great strategic acquisition at one price can be a dud at another price. The CFO’s role includes serving as a check on the natural enthusiasm of the deal proponents.”

Charles Honnywill, lead partner for divestments at EY, agrees that the CFO needs to become a company’s chief salesperson.

“One of the problems CFOs have is the baggage of ownership,” he says. “If selling a division of a company, you need to think of selling that division through the lens of the buyer. If they [the division] are left too much on their own to run the sales process, they may undersell the business. The big issue is, how do you surround yourself with a team of experts and number crunchers, and then find an attractive way to sell the business?” 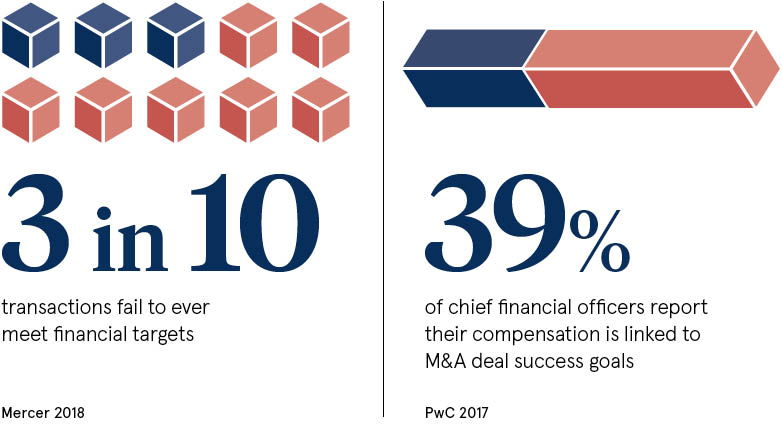 CFO must head up M&A process, but they cannot do it alone

To that end, an M&A strategy can only be successful when the right person is hired for the job. While the CEO is ultimately responsible for determining a company’s strategy and guiding it towards success, they need to surround themselves with the right people to get this done, with the CFO being an important piece of the puzzle.

“It’s fundamental to the successful running of a company that you have a CFO who can not only run the numbers, but also manage the commercial, industrial and human resources strategy of the group,” says Justin Welstead, head of transactions at Eight Advisory. “A CEO who wants to deliver correctly will look for a CFO who is more than purely a numbers person.”

Of course, it’s not down to the CFO alone to broker a deal and integrate a company. Depending on the size of the company, there will frequently be a corporate development team involved in the process, says Iain Redford at Bristows.

“Around 20 years ago, the CFO was always the person running the deal, but there is an increasing trend for companies to have an M&A strategy for achieving their growth ambitions,” says Mr Redford, adding this is particularly common in the technology, pharmaceutical and consumer goods sectors.

With deals growing larger, data becoming more complex and the M&A process moving faster than in the past, it is essential for CFOs to work alongside a skills head of M&A and the right corporate development experts.

“They will recognise that M&A is a big change to those involved and, around six months before, they will outline to everyone in advance what their role will be in the process,” says Mr Honnywill. “The best CFOs are those who recognise that it’s an unusual period and they need to make people comfortable with it, to professionalise it, and to manage it effectively.”