Putting sales at the heart of strategy

In the 1980s, finance was sexy. High-rolling City beasts like Peter de Savary and Tiny Rowland thrilled the public with galactic deals, stock market launches and leveraged buy-outs. Ambitious kids wore pinstriped suits and slicked their hair back like a wannabe from the movie Wall Street.

In the 1990s the tech wizards stole the spotlight. Dotcoms exploded on to the scene, and anyone in a boardroom who could ramble about html and secure socket layers won rapt attention. Internet service provider Freeserve won a £10-billion valuation on zero revenue - free really meant free - perfectly capturing the mood.

Now? It’s a new era. And the kings of the boardroom are in sales.

The reasons are obvious. Sales sits closest to customer data and, since data is the “new oil”, the sales department can dominate any conversation. Sales teams pick up customer feedback before anyone else. They know what cross-sells. It’s a technical discipline. At the end of 2017, there were 5,800 martech software packages, covering everything from programmatic advertising to predictive analytics.

Shirtmaker Christian Benedict is a good example. “I can’t emphasise this enough,” says founder and chief executive Christian McAleenan. “We test everything from Facebook ads to landing pages to emails.  The results determine how we go forward and they can’t really be predicted.”

The company runs multivariate tests on rival versions of the same webpages to see which designs work best. Mr McAleenan says: “Maybe you would have guessed that the group shot will outperform the image of a single folded shirt. However, you could just as easily have got both calls wrong.” Data rules everything, because it offers truth, not guesswork. “I was sure our customers would be in their 20s. In fact, they’re mainly in their 30s,” he says.

Pet food brand Pooch & Mutt puts sales centre stage to accelerate growth. Founder Guy Blaskey says: “Instead of spending hours debating between two products or marketing approaches, you can stick both on Facebook or Google and with a £50 ad budget find out what customers think.”

Mr Blaskey believes it’s the only way to prosper. Larger companies that relegate sales will only struggle. “The problem with big organisations is they don’t think like this and they don’t realise how easy it is. They make it difficult because there would be so many people involved in making that happen. In a small, challenger company, the founder would do it themselves without thinking or planning too much,” he says. 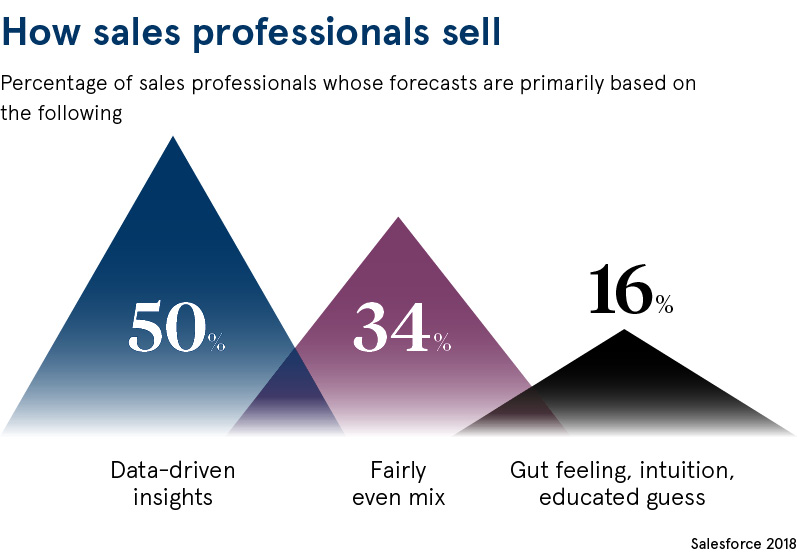 Involving sales in strategy from the off can help boost motivation

Here’s another dividend. Putting sales in charge of strategy gives the team a surge in motivation. “Companies should absolutely hand strategy over to sales and marketing if they are going to be playing a big part in performing on it,” says Shaun Thomson, chief executive of Sandler Training, one of the UK’s biggest training organisations.

“They need to get involved to buy in and feel they own it. If they are just given the strategy and told to deliver, then they will not feel as connected to it, and the less likely it will be effectively implemented and achieved.”

The new power of sales teams unnerves a few people. Just as market incentives warped the behaviour of some high-profile financiers in the 1980s, putting sales in charge can lead to parallel perverse behaviours.

Dr Peter Colman, a partner at sales consultancy Simon-Kucher, recalls: “In one instance, a manufacturer’s sales team were left to devise their own incentive scheme, which they designed to give them heavy bonuses based on increasing the volume of sales. It encouraged such discounting that they set off a full-blown price war that took their company, and indeed their competitors in the sector too, many months to recover from.”

Marketing marks the balance between customer needs and sales strategy

Bryony Thomas was a marketing strategist at Lloyds TSB during the scandal of pre-ticked boxes on payment protection insurance forms, and is now boss of Watertight Marketing. She warns: “Sales bonuses and shareholder value make people short sighted and data-driven scenario planning misses the humanity. Marketing, not sales, is precisely where the balance between customer needs and business strategy needs to sit. Leave it with salespeople and the focus is too short term, leading to things like the mortgage mis-selling.”

Risks may be underplayed by sales executives. Rob Sowerby, director of Professional Courses at the London School of Business and Finance, says: “The board is more likely to be in a better position to consider the risks in a comprehensive manner, in a way that the sales team will not. Such an approach may highlight that a potentially highly profitable course of action or new product, although likely to generate profit and wealth, is unacceptable because it poses a risk, which is either unacceptably large or difficult to quantify, or both.”

For some, the ascendancy of salespeople in strategy is simply heresy. William Forshaw, chief executive and founder of luxury leather brand Maxwell Scott, says: “We’re a luxury brand in the fashion and design industry; putting barriers on any form of creativity is suicide for a company that aims to inspire customers and successfully compete within our industry. From marketing to web design, I feel it’s impossible to create unique ideas with data blurring your vision.”

But the trend is clear. Sales is the new powerhouse in the boardroom.