Kasparov: “tech must be celebrated, not feared”

Business kings and queens may feel like the coronavirus pandemic has forced them into a losing checkmate position. But their fate is not so black and white and an endgame can be averted, insists Garry Kasparov. And when the greatest chess player in history proffers strategy advice, it is worth heeding.

Now is the time to fight back and double down on technology, states the 63-year-old, who since retiring 15 years ago has become revered as one of the great intellects of the 21st century. It is critical, he argues, to expedite digital transformation, and for man to embrace machine.

Kasparov certainly knows more about risk and planning under extreme pressure than the vast majority of us. It’s also a vast understatement to say he’s au fait with tech, both at and away from the chessboard.

Indeed, his lifelong obsession with big data and algorithms began at a precociously early age. The Beast of Baku was a grandmaster at 17 and world champion from the age of 23 for 20 years until retirement in 2005.

Not satisfied with just being the dominant human chess player of his generation, Kasparov welcomed the challenge of Deep Blue, IBM’s chess-playing computer. The pair first clashed in February 1996 and man triumphed over machine 4–2, but he knew “the writing was on the wall”. It was only a matter of time before technology would be able to reign supreme – and likely sooner rather than later.

In May 1997 his much-anticipated rematch against what he called a “$10 million alarm clock” took place. With the hopes of humanity resting on his shoulders, again, Kasparov knew that he was risking his reputation. Indeed, on the eve of the second meeting Newsweek ran a preview titled “The Brain’s Last Stand”.

Time for man and machine to collaborate 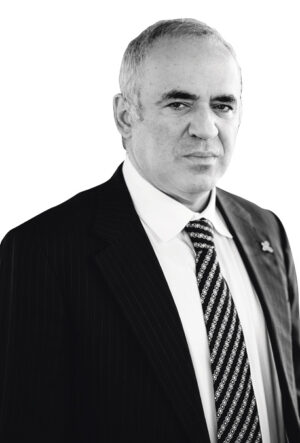 Deep Blue had improved from the year before. In an early example of machine learning, it was smarter and triumphed over its human opponent 3½–2½, becoming the first computer system to defeat a reigning world champion in a match under standard chess tournament time controls.

In an essential lesson to business leaders, the power of narrow artificial intelligence – in this case, trained to seek out optimal moves on the chessboard – proved irresistible. Consider that Deep Blue used a “brute-force” approach, with its 256 processors able to process 200 million possible moves every second.

When Kasparov featured on BBC Radio 4’s Desert Island Discs, in 2018, he said: “If it is a closed system, when there are rules [like in chess], machines will do it better. Because it is not about solving the game; it is about winning or prevailing. And even the best humans are doomed to make mistakes. It is inevitable.”

He is now a great advocate for AI and encourages leaders to harness digital technologies to optimise business performance and mitigate business risk. That tech will inevitably succeed means instead of shying away from AI adoption and digital transformation organisations have to invest heavily, especially at this epochal moment, Kasparov reasons.

“Yes, Deep Blue was a wake-up call for me, and the world, but rapid tech progress is fantastic,” he tells Raconteur. “We should celebrate it instead of fretting and fear-mongering. New technology is why most of us are still alive to complain about new technology.

“The digital world can change even faster than the material world, so the rate is increasing in some areas. But even that can be to our advantage if we go into the unknown instead of simply making existing things faster.”

Double down with digital transformation

When asked whether the COVID-19 fallout offers humanity a chance to press the reset button, he continues: “There is no reset; there is only learning from our mistakes and moving forward, with bumps and turns in the road. It’s not a coincidence that so much progress comes from crises and wars, as terrible as that sounds to say.

“Of course, we shouldn’t hope for catastrophes. To paraphrase Samuel Johnson, a pandemic concentrates the mind wonderfully. It brings out the best and the worst, and exposes them as well. For example, we’re seeing a stark difference in leaders and regimes that value human life and those that value only power. We should rethink alliances with those in that latter category, because in a crisis they put us all at risk.”

Given the pace of advancement, how should leaders engage with technology in the next 20 years, not just in terms of business processes but also from an ethical standpoint? “That’s a big question, and I’ve tried to answer it over the years in many lectures, articles and a book, Deep Thinking,” Kasparov continues. “I write about these issues a lot, because human-machine and AI are where security, human rights, and politics come together to define this era.

“Just two of the most important messages, then: it’s about people, not technology. Tech doesn’t exist in a vacuum, so think about how we use it and how it affects us. Two, tech isn’t good or evil; it’s agnostic. ‘AI ethics’ are human ethics – a mirror. So, for your country or your company, don’t expect AI to be moral if the people in charge aren’t.”

Collaboration is the name of the game

Having made his name in an individual sport, it is somewhat ironic that Kasparov now extols the virtues of collaboration. In April, he helped facilitate The Global Hack – the world’s largest-ever hackathon, with over 12,000 participants – in a bid to create and accelerate solutions for the challenges thrown up by coronavirus.

Kasparov urges members of the C-suite to pool knowledge, open data, work together, and delight in the resurgence of ‘garage’ innovation. “It’s great to celebrate the garage-innovation culture that was responsible for so much of the technology in the modern world. With the offices all closed now, we’re forced back to the garage.”

What can business leaders learn from The Global Hack? “This crisis is already spurring a lot of home-brew innovation across the world, from ventilator and mask hacks to musical collaboration and community organisation,” he adds. “People need to see the small contributions, not just big, well-funded ones, though. So they think: ‘Hey, I could do something like that.’”

Growth Strategies
The financial measures that CFOs are turning to as the downturn bites
Growth Strategies
Boxpark’s CEO on how to scale up a business in a downturn
Opinion
Why, robot? AI is pushing business down a risky path
Risk & Regulation
How to communicate with investors during a recession
Leadership
How to smash a silo
Technology
PETs: the tech balancing data insights and customer privacy