All too often, failed outsourcing projects stem from a breakdown in relations with the customer and it’s usually the supplier who gets the blame, accused of overpromising or exceeding the agreed time or budget. But times are changing for maligned outsourcing suppliers as customers start to accept greater accountability.

As Anthony Potter, partner at consultancy Elixirr, says: “Successful deals tend to be characterised by a change in the nature of the relationship between the outsourcer and the client towards true partnerships, rather than transactional relationships. Such a partnership means both parties are incentivised by the same outcomes and aligned to the client’s objectives.” 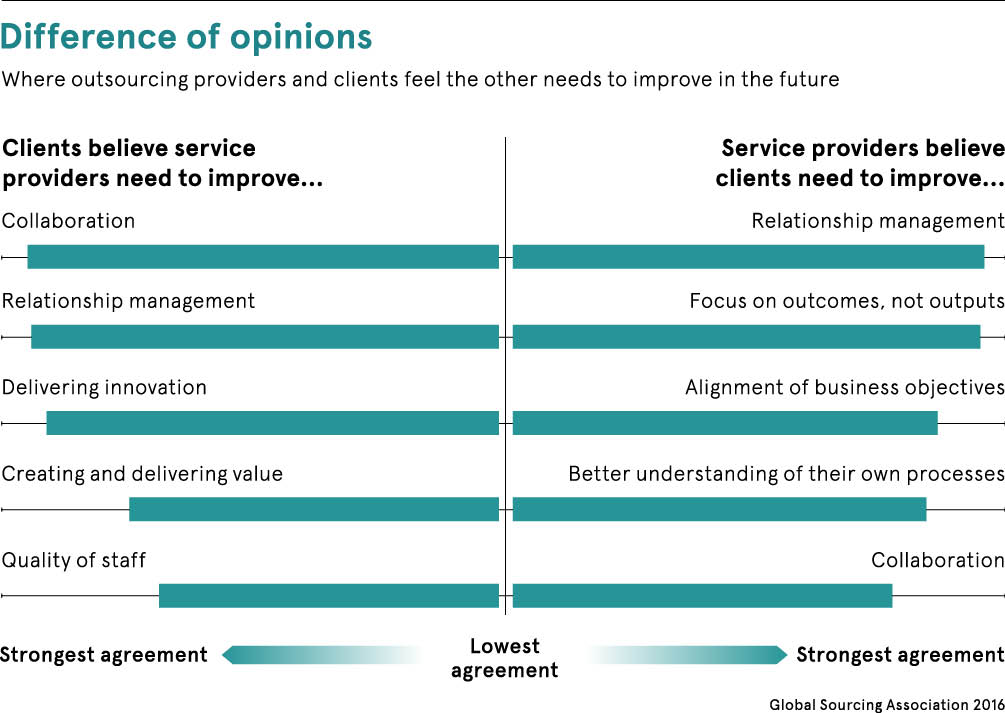 Changes in the supplier-customer relationship are also driven by other factors, chiefly the pace of technological change and the unease prompted by Brexit. It means that no longer are lengthy, costly and rigid deals the norm.

Punit Bhatia, partner at Deloitte, says typical contracts used to be for ten or even twenty years, particularly in the public sector, but three to five-year deals are more typical now. “People want certainty over their cost profile over the next five years. Neither the client nor the supplier really know what new, game-changing technology will hit them in another two years, so people are having to be a lot more flexible at contracting,” he says.

“There is also so much economic uncertainty out there that people don’t feel comfortable committing for a long time.”

In addition, there is a growing need for an agile way of working, something particularly being seen in the digital sector, and this is changing the dynamics between suppliers and customers. James Cannings, co-founder of design and build agency MMT Digital, whose clients include Vodafone, says the majority of request for proposals now reference a requirement to work in an agile way.

“For agile delivery to be successful, it often requires the wider organisation to adjust, and that is rarely backed up with a deep knowledge of what is required in terms of skills, technology and culture to achieve success. Often it is seen, incorrectly, as a silver bullet to the delivery of a successful project and something that, in the most part, can just be outsourced.”

As he says, forming a single team between the customer and supplier is the key to agile working. “Everything has to be 100 per cent transparent to ensure that every individual on the team understands the business challenge and the end-user needs, so they can input into the process every step of the way,” says Mr Cannings.

His words resonate with those of Mr Bhatia, who cites lack of change management as the number-one cause of outsourcing relationships failing, as evidenced by Deloitte’s 2016 Global Outsourcing Survey.

“One of my clients is a major insurance provider and they are carrying out an outsourcing programme across a number of functions, putting change management at the core of it. We have carried out training with their people in each area of the business and had them appoint ‘change champions’. It is saying to the client in each case, ‘you are responsible for driving this change, no one else will do it for you’.”

Successful deals require trust and transparency, where the supplier is open about staffing, timelines, issues and risks, and the customer isn’t trying to bully the supplier into delivering miracles

It is part of a wider shift towards both customer accountability and greater honesty between the two parties. John Oswald, global principal and advisory at digital innovation consultancy Futurice, which works with multinationals on digital strategy and innovation culture, says: “Successful deals require trust and transparency, where the supplier is open about staffing, timelines, issues and risks, and the customer isn’t trying to bully the supplier into delivering miracles.”

Mr Oswald says he is starting to see a shift from a more traditional customer-supplier axis to a more collaborative approach. “Customers are increasingly willing to ‘co-create’ the desired outcomes, rather than simply issuing a tender and expecting a partner to be as aligned and capable as the tender document demands,” he says.

It is also a trend being seen by Rajesh Subramaniam, chief executive and managing director at business process outsourcer Firstsource Solutions. “There has been a definite cultural shift towards clients engaging with outsourcers to make a success of their partnerships,” he says. “They need to be able to trust their outsourcing partners to help them ride the wave of change, rather than being pulled under by it. For example, in our client relationships, we’re seeing an increase in project management and strategic planning capability.”

There is a definite change in the air, not least the cultural shift taking place as customers realise the necessity and wider benefits of working more closely with their outsourcing partners. But there is still work to be done, on both sides.

Mr Bhatia says he has one client just starting out on the outsourcing journey and they “can’t understand why the supplier can’t just do it all”, yet suppliers can be their own worst enemy. “In the heat of the sales process, many are still promising clients that they can drive this process for both sides,” he says.

Overpromising is one of the common reasons for a relationship breakdown between customer and supplier. As Mr Oswald says: “If expectations are sky high and managed through a procurement department, it’s highly likely that the supplier’s performance will be unsatisfactory.” But if a customer and a supplier can align objectives and responsibilities from the start, the project has a much greater chance of success.

Dave Walker, director of technology at pay-as-you-go storage company Lovespace, outsources the organisation’s cloud-hosting to Cogeco Peer 1. Having been involved in both successful and unsuccessful outsourcing projects, it is clear “you don’t simply hand over the risk and expect to walk away with anything close to a winning formula”, he says, concluding: “It is a relationship which needs open and constant communication to build the trust needed that both sides are looking out for each other’s best interests.”