Jack Welch, former chairman and chief executive of General Electric, knows better than most how change can affect a business. “When the rate of change on the outside exceeds the rate of change on the inside, the end is near,” he wrote in GE’s annual report at the turn of the millennium. It’s an observation that seems even more pertinent now than it did then. When Mr Welch made the remark there were no smartphones, Mark Zuckerberg was just another high school student and the Twin Towers were still standing. Today the fourth industrial revolution is disrupting entire industries, climate change is a serious threat to supply chains and political turmoil is part of everyday life. In other words, change is the new normal.

Change is no longer a choice for business leaders

“What’s really clear is that change has accelerated exponentially over the last couple of decades,” says David Holliday, a partner at Gate One, a digital and business transformation consultancy. “Meanwhile, you have all these organisations that are trying to make sense of what it means for them, and what it means for their leaders and their people.”

One way to figure out where to focus your efforts is to create two engines that sit alongside the core business, says Mr Holliday. The first engine drives the exploration and incubation of new ideas to identify what might be important to the business and its customers tomorrow; the second embeds any proven concepts within the organisation. However, this approach can be “fascinating but very unsettling” for leaders, he warns, because there’s “a lot of trial and error” involved in making it work successfully.

Generally speaking, he’s found there’s a clear distinction between organisations when it comes to disruptive innovation. “They’re either at the forefront, driving it with a positive mindset and treating it more as an opportunity, or they’re on the back foot, seeing it as a major threat to their resilience,” he says.

Leaders of the latter type may have reached their current position not because they excel at leading change, but because they have a deep understanding of today’s business environment. In fact, they may not feel well equipped to deal with continual change and disruption. But as Irene Molodtsov, chief executive of business transformation consultancy Sia Partners UK, says: “Change is not a one-off activity. It’s business as usual.” So these leaders may simply have to learn the right skills on the job.

Set a clear vision for how the business must change, and why

Bernd Vogel, professor in leadership and director of Henley Centre for Leadership, says that first and foremost they need to be clear about what areas of the business they want to remain stable and what areas they want to change faster, as well as which business capabilities they truly want to improve. “In many organisations change can take on a life of its own and then it can become a burden,” he says. “The key that actually connects why you’re doing it gets lost in the detail of the process.”

In addition to setting a clear vision of how the organisation needs to change and why, the energy and passion with which leaders apply themselves to business transformation plays a vital role in its success. “When you’re communicating a vision it’s like an input,” says Professor Vogel, “and it’s really important to ask: ‘Have we actually created a spark? Has that vision landed with every manager? Have they formed an attachment to it? And are they empowered to contribute to it?’”

When resistance to the vision occurs, it’s often not because people don’t believe change is necessary, “but because they don’t think that the action, the attention, the commitment is behind it at the top level”, he adds. 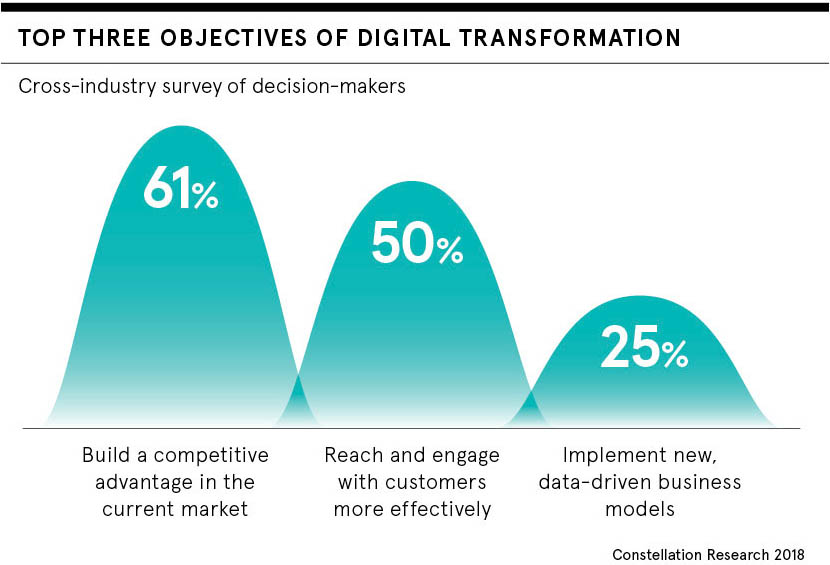 Companies that place an emphasis on long-term innovation, supported by every member of senior management, are far more likely to succeed in a climate of perpetual change, says Darren Fields, managing director for UK and Ireland at Citrix, a multinational software company that provides digital transformation solutions. They should also acknowledge that some individuals will be more comfortable than others when it comes to experimenting with new technologies and processes.

“By supporting such ‘innovation champions’ or ‘intrapreneurs’, who aren’t always at the senior level, but have the skills to identify and put new processes into practice, and giving them room to make mistakes, organisations set themselves up to discover new and more efficient ways of performing for their customers or users,” says Mr Fields.

Many successful business transformation strategies also draw on insights from the organisation’s partner network and sometimes involve new partnerships with startups or other organisations. “The more that they’re looking at a range of both internal and external ways to bring in new ideas and properly test them, the better,” says Gate One’s Mr Holliday.

Businesses must make sure values and vision are aligned

While Ms Molodtsov at Sia Partners UK believes innovation partnerships can have many positives, she says businesses need to think carefully before embarking on them. “You have to make sure that your values and your vision are aligned,” she explains.

“When people representing different value sets and different ways of doing things say ‘we’re going to go to market together’, people instinctively start cutting up the invisible pie. They start talking about how something is going to look and how they are going to co-brand it, when what they should be focused on is the market. Go out, pilot something and then, if it’s successful, you can start having those conversations.”