Every day employees at Google’s 8th Avenue HQ are being subtly manipulated by workplace design. Permanent desks don’t exist and its lifts are seemingly slower, both of which force staff to move around more. It’s all in the name of a workplace environment ethos around so-called “orchestrated chaos”, encouraging what it calls “casual collisions” or interactions that provoke unexpected conversations and new ideas. It just can’t happen when staff stay put.

For many this is workplace design at its best, engineering desired working behaviours that in theory, at least, create better results. And intellectually, it makes total sense. Few dispute that the environment staff are exposed to matters, not least because countless surveys back this up. In one poll of 1,456 workers by Office Genie in 2017, 45 per cent bemoaned lack of collaborative space while 20 per cent felt their workplace environment actually hindered them doing their job.

Is redesigning your office really worth it?

With statistics like these it’s no surprise the office refit market is booming. Data from Deloitte’s 2017 UK London Crane Survey finds office refurbishments outnumber new builds by more than two to one. But here’s the rub. Plenty of surveys reveal what staff want, often commissioned by suppliers pushing their solutions, but the extent to which it actually matters is a different kettle of fish.

“Having an inspiring workplace environment absolutely makes a difference,” says Charles Bettes, managing director at architecture and design studio gpad London. “What’s never really been answered is by how much, especially compared to rival spend – training, management development or benefits – which has reliable return on investment (RoI).”

Workplace design only works when in-line with organisation’s needs

And it seems the debate is getting less certain, thanks to the rise of satellite co-working spaces from the likes of WeWork. Many are minimalist and because they house multiple businesses, they forego accoutrements design agencies typically insist are vital to inspire staff. It could be argued their success is proof employees can pretty much work wherever, provided the very basics of technology and temperature are right.

“What’s interesting about workplace design is that in isolation it means nothing,” says Craig Murray, workplace design consultant at TSK, which has recently fitted out the likes of Kellogg’s and AJ Bell. “It only matters when designers listen to organisations’ needs. Good workplace design is about responding to pain points and seeking solutions to them.” He argues that the trend for creating “destination” offices, with associated frivolity, often means this gets forgotten. 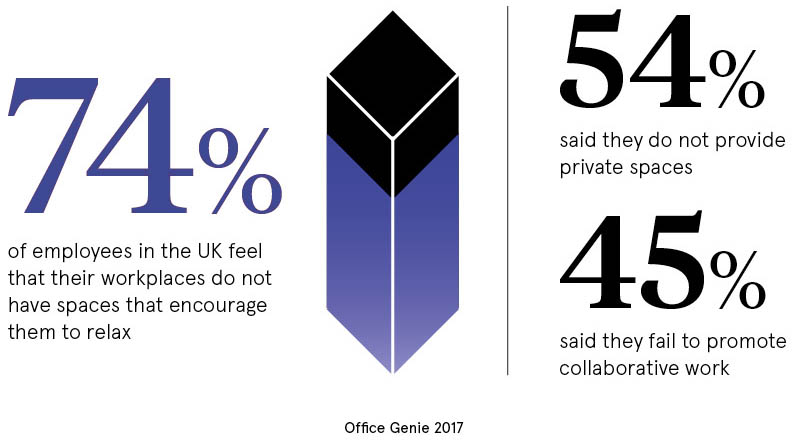 Barometers do exist to gauge how effective a workplace is for supporting the work staff do. Workplace effectiveness assessor Leesman has its Leesman+ recognition where firms must score 70 per cent or more and TSK’s AJ Bell building scored 80.6 per cent. Just one area it measures is how office design can better improve wellbeing, an emotion strongly linked to productivity.

Design being design though, trends do change. But what’s interesting is that having dashed to make offices open plan, research is now challenging this. A study of 40,000 workers in 300 offices by the Journal of Environmental Psychology concludes that the benefits of “enhanced interaction were smaller than then penalties of increased noise and decreased privacy”.

Penny Newman, chief people officer at law firm Lewis Silkin, agrees. “We’ve reduced the size of our headquarters to make more use of co-working spaces, but we’re preserving quiet areas for privacy,” she says. “We’re currently testing the exact proportion of traditional cellular to open-plan space to get the environment suited to the work we do.”

An antidote to this is what Christopher Allen, head of workplace consulting at Morgan Lovell, calls “universal design” – making a building accessible for all – for instance, not having curved corridors, which disorientates the visually impaired.

But while lawyers clearly need peace, plenty of others, particularly creatives, may need more stimulating environments. Andy Nairn, co-founder of ad agency Lucky Generals, says: “Creativity is fostered in environments that feel buzzy. As such our office is light and open, with plenty of social spaces. Smart chief executives see workplace design as an investment to get the best from their people, rather than a cost to be driven down to the bare minimum.”

Smart chief executives see workplace design as an investment to get the best from their people, rather than a cost to be driven down to the bare minimum

Few argue design has no place at all. At the other end of the spectrum are highly stylised, luxuriant spaces, private members clubs serving as satellite workspaces or co-working spaces. Arguably the most decadent of the latter is The Ministry, a 850-workstation venue with 70ft bar and serviced meeting rooms.

Opened earlier this month, it is night-club brand Ministry of Sound’s first foray into workspace provision. Executive chairman Lohan Presencer doesn’t mince his words. “The shared workspace boom is becoming a rush to the bottom – all the same, with awful slogans on their walls. Because our DNA is entertainment, we know how to create environments people feel creative in. Some 70 per cent of The Ministry is office space; the rest is for mingling and enjoying being there,” he says.

It’s worth remembering funky offices attract and retain as well as enthuse. “A building is 10 to 15 per cent of a company’s overhead, much less than the 70 to 80 per cent staff are,” says TSK’s Mr Murray. “Investing in the former is money well spent if it makes your biggest cost – employees – happier.”

Perhaps the greatest irony about workplace design is that by its visual nature, it is the easiest investment to actually “see”, much more than wellbeing or engagement projects. “That’s why chief executives will still put money into workplace environment,” concludes Morgan Lovell’s Mr Allen. “While the RoI is hard to see, great design isn’t.”