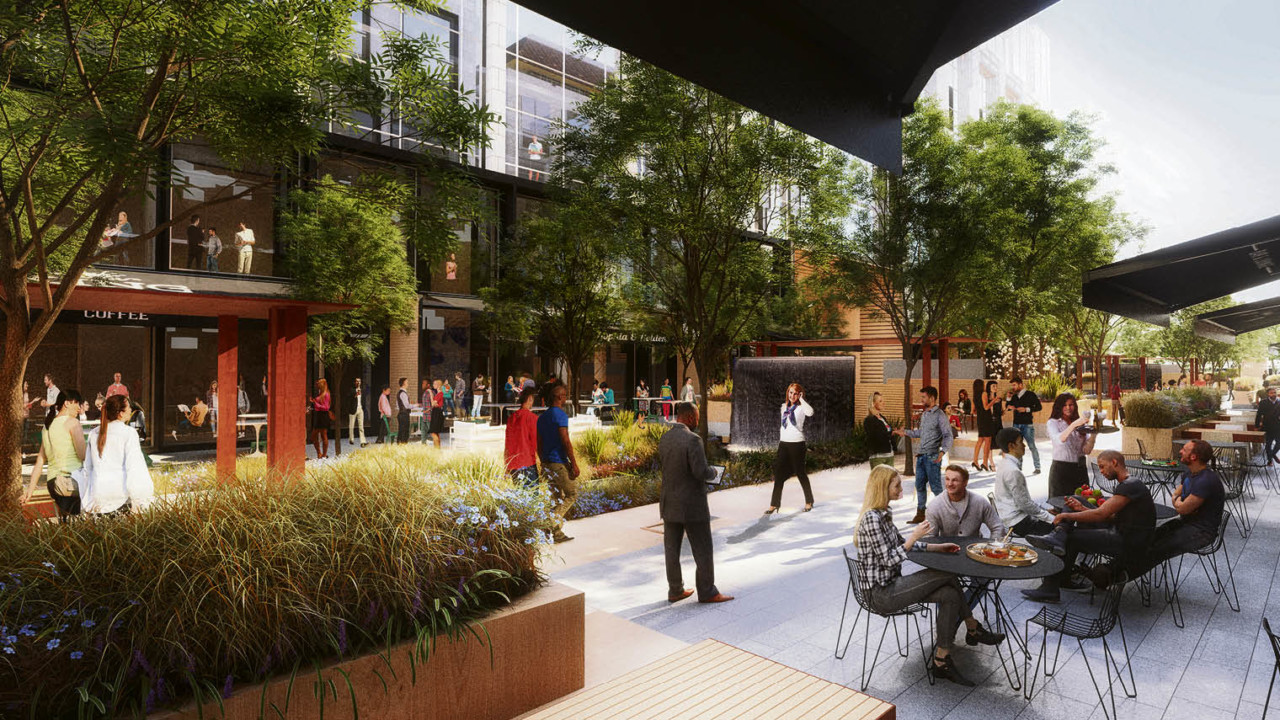 Strolling around 700 Bourke Street in Melbourne, home to National Australia Bank, and visitors could be forgiven for thinking they’re in a shopping centre not an office. The ground-floor “village” has racks for 600 bicycles, a pedestrian forecourt that funnels into a pyramidal central atrium, there’s a rooftop garden and people can even stop for a coffee, access the free wi-fi and rub shoulders with the bank’s 6,000 staff.

Designed by Woods Bagot, the 63,000sqm building heralds what many believe the modern workplaces now needs to be – a place that doesn’t just house staff, but involves the local community.

“Australia is about eight years ahead of the rest of the world,” says Anthony Brown, Sales and Marketing Director at BW: Workplace Experts. “But more and more buildings are now incorporating areas they want the community to embrace.” And, according to Mr Brown and other experts, this dual-use is as much being driven by employers as it is by architects and town planners.

“The new premise is that a building should be part of the community,” says Matthew Blain, design leader and principal at design practice Hassell. “Not only is this because employers want to attract people as potential employees from the local area, but there is a growing sense they should give back to the community they occupy too. In particular, the young have different demands about what they expect buildings to do; they see community participation as an important reason for choosing an employer in the first place.”

Chris Hiatt, director of London real estate developer Landid, says: “There is no distinction between work and life anymore, which means buildings need more public-like amenities.” But the overwhelming reason is to achieve what architects are increasingly calling “place-making”.

According to Colin Macgadie, creative director at building design consultancy BDG: “Employers are wanting to break down the ‘ivory tower’ view of offices. It’s crazy most workspaces stand empty after 6pm through to 8am the following morning. Giving an office area back to the community after hours, or even during the day, keeps a building vibrant, gives it more of a purpose, keeps the neighbourhood exciting.”

Mr Hiatt adds: “Employers no longer know what their day-to-day headcounts are. As buildings are already morphing into places to meet people rather than be home to desks, the view is why shouldn’t the public enjoy this meeting space too?”

With his team he is working on buildings designed specifically to incorporate public space and invite community participation. These include the Charter Building in Uxbridge, west London.

Mr Macgadie has done extensive work with ad agency WPP developing their Ideal Office concept globally. The latest project will redevelop the Rivierstaete building on the banks of the Amstel River in Amsterdam.

Other new developments include the soon-to-open White Collar Factory development in London, which specifically features a mix of office, retail and residential space, plus a new public square to be called Old Street Yard. Created by regeneration company, Derwent London, White Collar Factory comprises 237,000sqft of office space, but there will be 56,000sqft of public campus-style areas.

Derwent’s director Simon Silver says: “This is about creating a new type of office environment. The public space is literally a place people can go. It’s about the office being untethered and more immersive.”

But the concept of the multi-functional, communal office is developing so fast that the very idea of “community” is itself changing too and is now being extended to include much more than the immediate population.

“We’re also seeing community being used to talk about the inclusion of a firm’s clients, partners and suppliers,” says Mr Macgadie. “In this sense, we’re talking about their sector-specific ‘extended community’.

“In 2015, KPMG opened the KPMG Club in Grosvenor Street, London, a free-to-use place to work. Crucially, it’s not just for KPMG staff, but for clients and suppliers too. It’s not a public community space as such, but it’s a destination place for a wider set of people. I think very quickly, the vernacular of ‘the place’ – a space that is a unique place to go to and work at as well as hang out in – will become normal.”

The question is, of course, whether the trend for private companies to mix with the public will be a permanent fixture or a temporary fad. “Oh, I definitely don’t think it’s the latter,” argues Hassell’s Mr Blain. “Brands are competing for talent, so they want to be nearer the people they serve. It’s not local councils that are insisting public space is provided, it’s developers and employers believing it’s the right thing to do, to plant themselves more with their locality – and to make the environment more pleasant.”

While there will always be the need for parts of buildings to remain off-limits, he says, diversity of purpose is now paramount, concluding: “Buildings were already opening up to suit agile working. Incorporating the public is the natural extension of this, to create a truly strong community that is open to all.”

Occupying more than 244,000sqft, Uxbridge’s Charter Building is one of the largest office blocks in west London. According to Colin Macgadie, creative director at building design consultancy BDG, it’s an office that also invites the public to be part of the space too. “The idea is that membership of the building is greater than the population working in it,” he says. To emphasis this, the design of the building incorporates a 100 metre-long ground-level “street” and more than £200,000 has been spent on furniture for this and in the building’s atrium area. “There are 50 to 60 ways people can sit down in this public space,” says Mr Macgadie. “We’re very much likening it to a hotel lobby.” Also available in this area will be coffee bars and cafés, which while not competing with the high street will, he argues, “reach out to the public”. “It used to be the case that the business and the public didn’t mix. But today there’s a growing appreciation of how a building needs to be more part of a community. This is definitely a model more office spaces will be following,” he says.