If there’s one thing human resources professionals are supposed to understand more than most, it’s the importance of maintaining a good supply of talent. Failure to attract and retain fresh blood is terminal for all organisations. So why is it the HR profession does such a bad job of attracting highly skilled people into its own discipline and will it be this that hampers its ability to be strategic in the future?

It’s certainly no secret most people fell into the profession rather than actively sought it. A 2014 poll by XpertHR found more than half of HR practitioners said they entered the profession purely by chance. Unsurprisingly perhaps, some say happenstance on this scale is no way for a profession to perpetuate itself, not least because all the predictions are that HR will be required to be even more pivotal.

“It’s a real worry HR is losing talent to the likes of IT, finance and law,” says Craig McCoy, formerly human resources director (HRD) at both BSkyB and BT. “HR is actually a discipline which requires growing capabilities, yet it still has that ‘fluffy’ image. These two realities don’t marry well. The problem is, the sector has to attract the sort of people who can handle what the modern role of HR requires or they simply won’t stay.”

According to Mr McCoy, part of the problem is that compared to other professions, such as finance, which have an established career path: “HR is far more esoteric.” The research bears this out. XpertHR also found only 11 per cent of HR practitioners entered the profession because they thought it was well respected, while just 10 per cent thought it had good prospects. 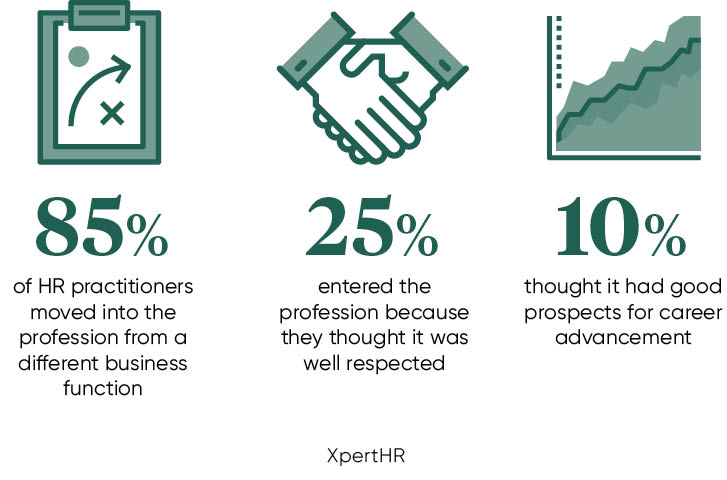 Anouska Ramsay, talent director at Capgemini, says: “I think even the name HR puts people off. It’s a career that sounds like it turns people into commodities, when really it should be conjuring up images of driving transformation and change, not policing.”

Whatever its image, HR simply isn’t resonating. In 2015, a YouGov poll of 15,000 adults asked what their most desired career was and out of 50 professions listed, HR didn’t even appear. People would rather be a cleaner, traffic warden, even a coal miner, than aspire to work in HR.

“HR’s reputation for being back office is certainly still there,” says Louisa Baczor, research adviser at the Chartered Institute of Personnel and Development (CIPD), the body tasked with raising the standing of the profession.

However, she says there is evidence of change: “Job titles you see include the likes of chief innovation officer, engagement officer, sustainability officer – exciting roles that are attracting good people in. The big data aspect of HR and people analytics are also bringing in data scientists so, if anything, I’m seeing more micro-specialisms within HR, which bring in good people.”

What isn’t in doubt is that there is a much wider understanding of the HR role’s potential impact on shareholders and reputation. Ryanair’s recent pilots fiasco was essentially an HR problem around scheduling, and talent attraction and retention.

Ms Baczor says stories like these, even public relations disasters, should attract the sort of talent who want to make a difference. Mr McCoy, meanwhile, argues there are much more HR-specific university courses than there were 20 years ago and starting salaries are as good as other professions. So what’s missing then?

“I honestly think it’s simply that people still don’t understand what strategic HR is all about,” says Sandra Porter, director at HR consultancy The HR Dept, and formerly HRD at Starbucks and Clinton Cards.

“I don’t think I’ve ever met a single colleague who’s said HR was what they always wanted to do. I’m no different. I left university, considering everything from teaching to estate agency. I got an opportunity to work at a recruitment agency, but literally on my first day, the personnel director was sacked and I was asked if I could field HR calls instead. That was how my HR career started.”

According to Ms Porter, the CIPD is doing its best, however. “It works hard to ensure HR is part of the strategic conversation,” she says. But as well as the CIPD and schools being more vocal about presenting the profession to young people, she argues another option needs serious consideration.

“Most large businesses have graduate schemes and I think doing a stint in the HR department should be a compulsory part of them,” she says. “At the moment, HR isn’t capturing the best brains before they’re tempted elsewhere. This would ensure really gifted people see what the discipline is about and be captured early.”

Some argue that as long as people find their true vocation in HR eventually, it needn’t matter that they didn’t start out there, especially because coming in later they’ll bring valuable real-life business experience, something HR is criticised for lacking.

“My boss comes from programme management and the diversity of people coming into HR from outside is enriching the overall skillbase,” argues Ms Ramsay. But she adds: “I do think the profession and the CIPD do need to be more proactive to break down stereotypes. We need to tell people what the sector is about, to start with. People can sometimes only see the grotty side of HR, not the bit that’s about accelerating careers, building organisational capability.”

But not all is lost. Mr McCoy says: “HR is still fundamentally about people and the social sciences, such as psychology and sociology, could be the next big source of good talent the profession desperately needs.”

Ms Ramsay concludes: “HR should be one of the most important professions in coming years – it’s the task of everyone in the sector to ensure this happens.”