HR should step up to a strategic role

If you work in human resources and think you’re being strategic, John Boudreau, professor of management and organisation at the University of California, has news for you. The author of Effective human resource management: A global analysis doesn’t mince his words when he says HR professionals today spend no more time than they did in 1995 being strategic – less than 15 per cent.

While the accusation HR spends most of its time merely administering HR policy isn’t new, it’s one that’s only going to be exposed more, as business struggles with an increasingly volatile, uncertain, complex and ambiguous world.

HR’s role must be as change agents, continually identifying where the best human-capital value is and creating the right organisational systems that facilitate it

In this future, the academic consensus is that HR’s role must be as change agents, continually identifying where the best human-capital value is and creating the right organisational systems that facilitate it. In short, organisational design (OD) is the skill human resources directors (HRDs) need now.

It’s this, says Lucy Adams, former BBC HRD and chief executive of disruptive HR, that will see HR “build capability not compliance”. But can HRDs really read the future when even dealing with the present can feel hard enough?

“They can, but it’s vital OD is properly understood,” says Charmi Patel, associate professor of international human resource management at Henley Business School. “Most people think OD is about the structure of a business – who sits where. It is, but that’s only part of it. It’s really about organisational effectiveness, which means HR needs a way of operating that is able to adapt and be flexible to change.”

Karen Davies, founder of The People Factor, which helps businesses approach OD, says: “More than ever HR needs to prove it’s on top of knowing what’s on the horizon. But even with predictable change, like Brexit, which will massively impact the supply of labour and requires solutions to address it, most firms are barely there in terms of scenario planning. Normally change is far less obvious.”

According to Peter Reilly, principal associate at the Institute for Employment Studies, the skill in OD is not necessarily predicting the future, but spotting continuity within the process of change.

“It’s more working out where the disruptions are going,” he says. “There is some debate whether HR should be realising the CEO’s interpretation of the change they perceive or whether HR should present the strategy they think the CEO should change. This is probably the next stage on, but to start with, HR needs to move much more upstream, to be the discipline that talks about how the future needs to be tackled now, rather than being the people who are tasked with implementing the process of change.” 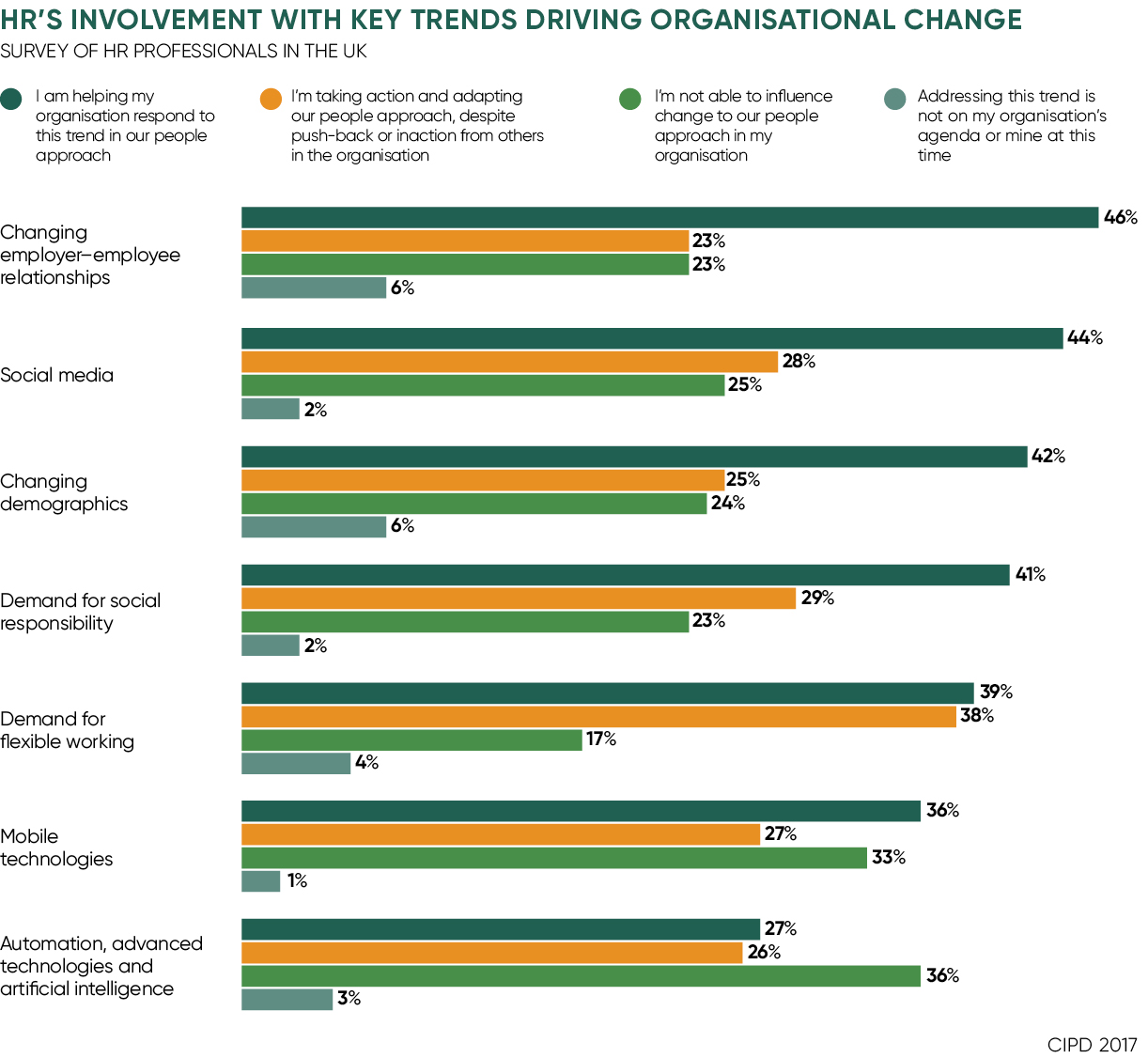 Google is one such organisation that is attempting to apply this way of thinking throughout the business, including changing how it approaches its hiring, and learning and development (L&D) policies.

According to a spokesperson: “The pace of change is such that we can no longer guarantee that the job we hire people into now will even exist in two, three, four years’ time. We’d be forever playing catch-up. The only way to get ahead is by actually shifting our learning strategy to be about teaching mindsets rather than skills.”

By hiring people who are self-learners, and changing recruitment demands so only these people join the business, is how Google is able to feel comfortable that people will in future upskill themselves and, by default, the business.

Although not all companies will necessarily think they’re changing as fast as Google, HR professionals must, argue experts, bring an OD mindset to all their decision-making. “In the 1950s, the average life cycle of a company was 50 years. In the next ten years, it’s likely to be ten years,” says Sian Harrington, founder of ThePeopleSpace, the leadership community that promotes value creation through people.

“Business has limited time to find where value resides in a company and exploit it, but this has to be HR’s task. Netflix has moved from being a DVD business, to a film streamer, to a filmmaker in less than a decade. It’s done so because the board has been open to change, but also because it’s been willing to take a few leaps of faith.”

Some of these leaps of faith will necessarily require HRDs to shake themselves out of their comfort zone. Nalin Miglani for one, chief human resources officer at EXL Service Holdings and ex-HR officer at Tata Global Beverages, says he’s not leaving anything off the table, and nor should others.

He says: “The next phase of OD will look at value created not just inside, but outside the organisation too, which comes from customers or from skilled talent who come in and out on a project basis. This could mean the design of an organisation becomes such that only very core tasks require permanent employees and, for everything else, people are pulled in as and when they’re needed.”

Eugenio Pirri, chief people and culture officer at the Dorchester Collection, concludes: “The starting point of any OD conversation has to be the strategic initiative of the business and not the organisational chart. When you truly start seeing yourself as a designer of people, roles, communication, structures and eventually the hierarchies, or lack thereof, you soon realise the potential to solve problems in different ways is quite limitless in the future.”