Exporters should adapt to the local culture and business etiquette in their target markets, as Elliot Wilson discovers

One of the greatest fallacies in the globalised modern age is to assume that everyone is the same basic bag of atoms. This, believes Allyson Stewart-Allen, founder and chief executive of International Marketing Partners, a business consultancy with offices in London and Los Angeles, is a universal problem, stemming from the innate human assumption that “another culture or country is just like theirs”.

They aren’t, of course, and you probably noticed that the last time you went on holiday. But recognising this misconception and contorting your mind to adapt to local cultures can mean the difference between success and failure for export-minded companies.

First things first. For any exporter one simple, fundamental fact persists: we do business with people we like. “You need to make friends first,” says Lara Morgan, who sold Pacific Direct, the global toiletries firm she founded at 23, for £20 million. “We buy from the person first, the product second and the company last. That’s factually how we approach the buying decisions we make.”

This friend factor is common to all cultures, but it’s greater in some markets than others. Exporters looking to do business in East Asia typically have to build in more getting-to-know-you time than they might in Europe or North America, and look for shared values and philosophies. Expecting to do a deal before rapport is built is insulting in some markets, notes Ms Stewart-Allen, suggesting that you are willing to put business before relationships.

Being a good soul and a friendly face helps, of course, but it isn’t a panacea to all ills. To sell successfully overseas you also need to have a range of weapons in your arsenal, each ever-shifting and constantly available. Ms Morgan, who now runs a business advisory outfit, Company Shortcuts, believes a successful exporter must be a “chameleon, using your brains and adapting to the world around you”.

This flexibility of mind is more likely to be found in those with a diverse past or an innate sense of adventure. The trade-minded Dutch are famously good exporters, having retained their mercantilist spirit and adaptability. For others, it’s the richness of their upbringing. Arnab Dutt, managing director of Texane, a Leicestershire-based firm that manufactures heavy wheels used on mass-transit railways including the Paris and New York metros, was brought up in north London speaking three languages. That instilled the sort of “cultural sensitivity and emotional intelligence” needed to do deals in far-off places, he believes.

Often, the key to success for any exporter – it’s different for everyone – is to get the little things right. Don’t be rude or assume – still a common British blunder – that shouting will get you understood. If you can’t speak the language of the country you are presenting into, hire someone reliable who does. Preparation is key. Do your research before you leave home. Talk to local partners if you have them or in-country contacts.

We buy from the person first, the product second and the company last

Well-produced marketing literature is central to your integrity, so spend time and money on your website and brochures. “The first thing to go when you lose accuracy is your credibility,” says Larry Gould, chief executive and founder of thebigword, a Leeds-based translation firm boasting FTSE 100 firms among its roster of clients. “If what you are saying is wrong, you’ll lose out. It amazes me how many chief executives fly first class on business trips, but won’t get stuff translated.” 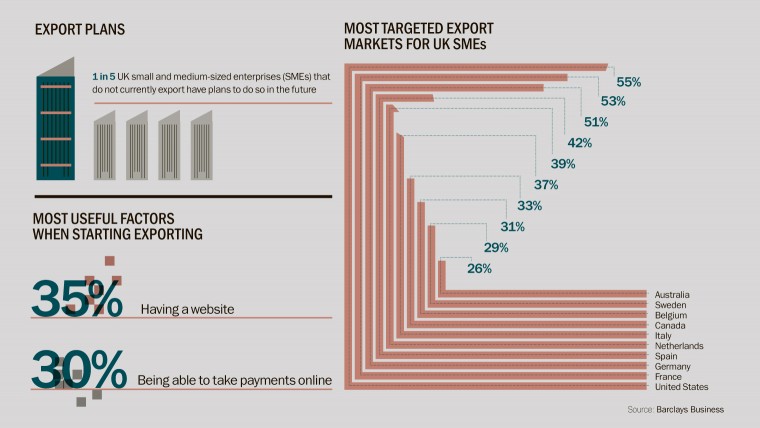 And don’t try to do everything yourself. UK Trade & Investment, the government body, is a vital source of information, as are Britain’s myriad specialist trade associations. All British embassies now have trade departments that are “vital sources of contacts for any aspiring exporter”, says Texane’s Mr Dutt, particularly in culturally complex regions, such as the Middle East. Official government trade missions can help, but keep a clear aim in mind to avoid wasting time and money.

Think on your feet. “Speak to the concierge,” when you arrive in a new market, suggests Company Shortcuts’ Ms Morgan. “Find out what hours people work and what customs people hold dear.” Irony and sarcasm may work in Britain, but usually get lost in a foreign boardroom; leave humour to comedians. And don’t let rejection discourage you. Ms Morgan bombarded the Indian hotelier P.R.S. Oberoi with samples when building up Pacific Direct. “Eventually he gave me the time of day,” she remembers. “You have to be persistent and we don’t learn that well in Britain. A real entrepreneur always finds a way.”

A host of other principles are also undervalued. How you present yourself – clothes, shoes, ties, handbags – is a proxy for communicating success and gaining trust in America, while in Europe, authenticity is built on getting to know people. In some countries, buyers typically place more emphasis on what a product promises to do, while in others it’s all about hard and provable fact. German customers, notes Mr Dutt, want “solid evidence – proof, testing and science – that your products are the best; then they will talk to you”.

Even the concept of time varies immensely from one region and country to another. In hard-headed America, notes International Marketing Partners’ Ms Stewart-Allen, time is “tightly regulated” with business meetings “planned minutely and each slide or bullet point carefully choreographed”. In Latin America, Asia and even Europe, clients care less if a meeting runs over or even has no endpoint at all, a cultural dynamic that can sometimes make all that hard work worthwhile.

For Mr Dutt, meetings with one French client start not in a boardroom but a restaurant. “We get through a bottle of champagne at lunch before even talking about business,” he says. “I could get used to that sort of lifestyle.”