Imagine you had used the same travel agent for 20 years and each holiday they recommended had been great. Maybe the weather had not always been fantastic and some hotels were slightly different to what you expected, but on the whole you had been satisfied.

Now imagine this same travel agent was offering you a round-the-world cruise to destinations they had hand-picked and felt sure you would enjoy. The cruise would last for three years, and your every whim and wish would be catered for. It would also only be slightly more expensive than taking separate holidays, and all the work of choosing destinations and hotels would be taken care of.

Sounds great, doesn’t it? Except if you get seasick, don’t like the on-board entertainment or find only certain activities are included in the price, there could be no chance to jump ship before it reached its final destination.

It’s a decision you would have to think very carefully about, not just by inspecting the route, the specifications of the ship, and the experience and aptitude of the staff, but also comparing the whole package with what other companies offered.

Now consider that more than 75 per cent of fiduciary management contracts issued by pension funds in the 12 months to October 2014 were signed without the trustees issuing an open tender to inspect other options.

Weighing up your options

Around eight in ten pension funds only took one quote – the majority of them from their incumbent investment consultant – before signing over full control of their portfolio or setting sail on a long-term voyage over which they had very little control.

This statistic from KPMG’s annual fiduciary management survey  in October 2014 was described by the auditing and consultancy firm as “stand out”, alongside the growth in full delegation mandates, which increased by an “astonishing” 44 per cent in one year.

What shocks many in the industry is pension schemes are failing to question whether they wanted to go on a cruise at all. 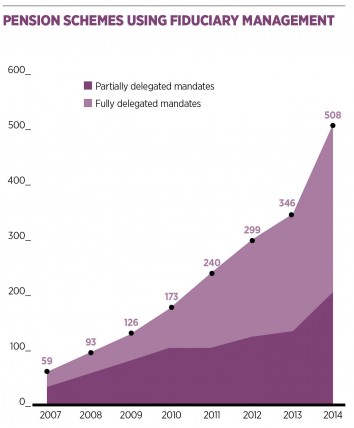 “There is an inherent danger of trustees sleepwalking into fiduciary management as they don’t realise what is happening,” says Peter Dorward, managing director at IC Select, which researches investment consultants and fiduciary managers. “Many trustees don’t appreciate how different fiduciary management is or have the capacity to ask the necessary questions before signing up.”

Fiduciary management may seem like a panacea for small and medium-sized pensions, but it is not always the case, says Mr Dorward. “Many don’t realise they don’t have oversight of what is going on in their portfolios, yet that they will still be ultimately liable for any shortfall.”

Additionally, as no cruise ship operates in the same way, each fiduciary manager has very different investment philosophies, processes and fees. What your incumbent consultant may be serving up now may be different to what they offer as a fiduciary manager.

IC Select carries out between 60 and 70 hours of due diligence on the firms they research as would be expected on a fund manager, who arguably has less impact on a pension fund portfolio than a fiduciary manager.

However, at least 75 per cent of pension funds have not used such research, according to KPMG’s survey. Rather than through laziness, it is often down to human nature on both sides, according to Karen Shackleton, a senior adviser at Allenbridge, which carries out similar selection exercises.

“Since day one in the evolution of delegated consulting or fiduciary management, the natural next step has been to try and convert existing clients,” says Ms Shackleton. “Consultants have trusted relationships with clients whereas it is harder for asset managers to develop the same when they are often only wheeled in for 15 minutes at a quarterly meeting.”

Additionally, the fund manager has usually only experience of looking after one small section of a portfolio rather than overseeing the whole thing as would the consultant.

“The investment consultant has the advantage,” says Ms Shackleton, “but it is essential for pension funds to ask how they manage a very obvious conflict of interest.”

This is the first in a long list of questions the experts advise their clients to ask in an open and competitive tender. It is also the first step in a long process, which does not end at the appointment of a provider, according to David Clare, newly appointed head of fiduciary oversight at consulting firm Barnett Waddingham. The large UK-only firm has taken the decision to offer monitoring services on fiduciary management rather than actively operate in the market.

“We wanted to be a catalyst for independent debate,” says Mr Clare. “We do not have an axe to grind in this market and want to arm trustees with the questions they need to ask as they go along.”

This debate begins at the outset by removing a “better the devil you know” mindset and ensuring trustees conduct a true, competitive tender rather than a benchmarking exercise on the firm with which they are already working, despite it taking more time, he says.

“This delay can also help trustees figure out whether fiduciary management is the right direction of travel after all,” says Mr Clare. “It is a big decision that will outlast the tenure of many on the trustee board who are taking it.”

Mr Clare believes this side of fiduciary management will grow as pension funds realise the enormity of the decision they have made – and this is reflected in KPMG’s survey.

In 2014, 32 pensions had appointed some sort of overseeing firm, up from 24 funds a year earlier. That marked a 33 per cent increase and, while not quite up to the 44 per cent growth the total delegated market saw as a whole, it indicates a direction of travel.