It’s never easy to spot the tipping point in a technology cycle, the moment when the science leaps from the laboratory to the high street. Blockchain – the distributed database that can be used by several counterparties to build unalterable records – has been around for quarter of a century, but when will it finally make it out into the real world?

“The technology is not the issue,” says Rahul Singh, president of HCL Technologies, an IT company. “The issue is the acceptance of that technology. Understanding of the blockchain is still at the R&D stage.”

Much has been promised, with blockchain hype reaching fever pitch as all financial services, big and small, try to grasp the concept and the consequences. Steve Webb, financial services blockchain leader at PwC, says many clients are teetering on the edge of launching blockchain programmes that have been taken through the stages of proof of concept.

“This year is likely to see the early adopters – still a minority, but starting to bring things to market,” he says. “So, for example, Santander has piloted an app to make international payments – it is currently only for staff, but the intention is to go live soon.”

As the technology matures and real products and services come onstream, the uses of blockchain are diverging. Peter Randall, chief executive of SETL, a blockchain specialist, sees a key difference between the permissioned and non-permissioned environments: those blockchains that are restricted to certain people or companies and those that are not.

“The permissioned environment, a distributed ledger, operates in the way a financial services company operates already, but is a far, far cheaper way of running a structure,” he says. “But a bank has to keep control of its data; it has a lot of existing processes, from know your customer to anti-money laundering, and it’s only within a permissioned environment that you could expect a regulator or compliance officer to say yes to a blockchain structure.”

Unlike non-permissioned environments, such as the crypto-currency bitcoin, which are open to anyone, the blockchain developments that are going live are likely to be far more limited and targeted. Blockchain can easily be used by a single company to offer new products or services.

Imagine, now Article 50 has been triggered, how a letter of credit that could be issued in a matter of hours rather than days could help make exporting more attractive

Stephen Holmes, chief technology officer of the Fintech Banking Lab at consultancy VirtusaPolaris, gives as an example options in agricultural financing: monitoring the use of a major piece of machinery via the internet of things, and logging that information via blockchain to determine depreciation and potentially cheaper financing.

But he adds that although blockchain can be used now by a company to create new standalone products: “To create a marketplace with interoperability, you need standards. Privacy and security are the issues that are being resolved. Part of that is agreeing standards.”

The interoperability of blockchain is one of the areas that has been most hyped. For two parties to a deal both to be able to create and maintain a record of a transaction could revolutionise back-office functions in financial services, cutting through the reams of work involved in monitoring, agreeing and record-keeping. 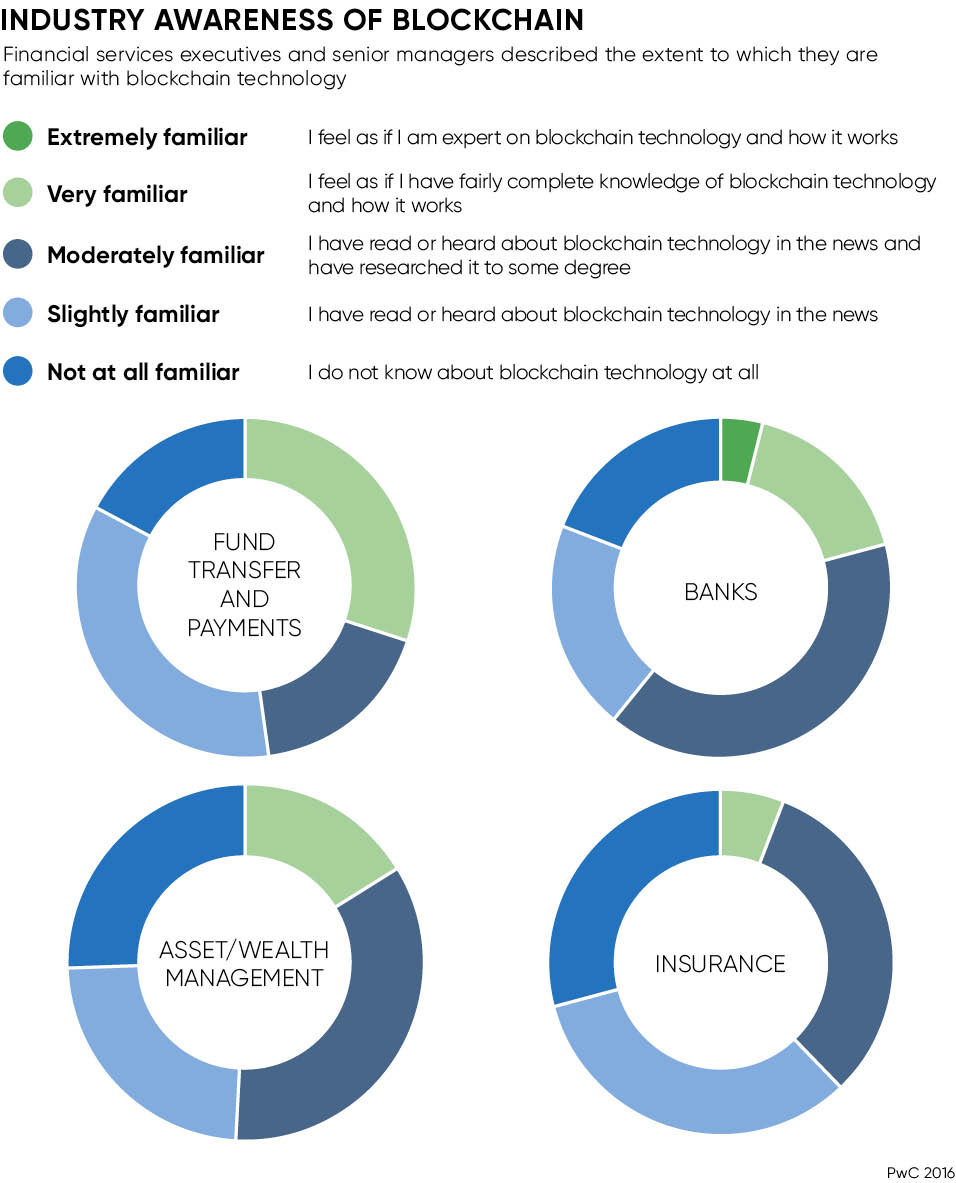 The international community is working on global standards, but it is likely to be another two to three years before that job is done. PwC’s Mr Webb says this is part of the change that has to happen before blockchain goes mainstream.

But Thorsten Peisl of RISE Financial Technologies, which provides decentralised ledgers for the post-trade industry, says there’s plenty that can be done in the meantime.

“We don’t need to wait for new standards; the technology needs to be compatible with the regulations that already exist,” he says. “In order to bring it to life, it needs agreement and it’s a matter of education. The lawyers need to talk to the technologists; it’s a lot about terminology – what do you mean by the word ‘token’? – and finding alignment between the two worlds.”

Applying the technology to solving a business problem, particularly a problem no one knew they had, is of course the clever bit, and the ideas are flowing. Marine insurers are looking into shipping container “locks” that would tell you not only when the cargo was loaded or delivered, but if the vessel strayed into dangerous waters; premiums could be adjusted instantly.

Northern Trust and IBM have built a blockchain to administer a private equity fund. Imagine, now Article 50 has been triggered, how a letter of credit that could be issued in a matter of hours rather than days could help make exporting more attractive. Suppose you need to make a payment to someone who doesn’t have a bank account, blockchain might give you the option of using a mobile phone instead.

Blockchain has grown to the point where people are no longer asking about the technology, but instead asking what it can do. How long before it goes mainstream? It already has.