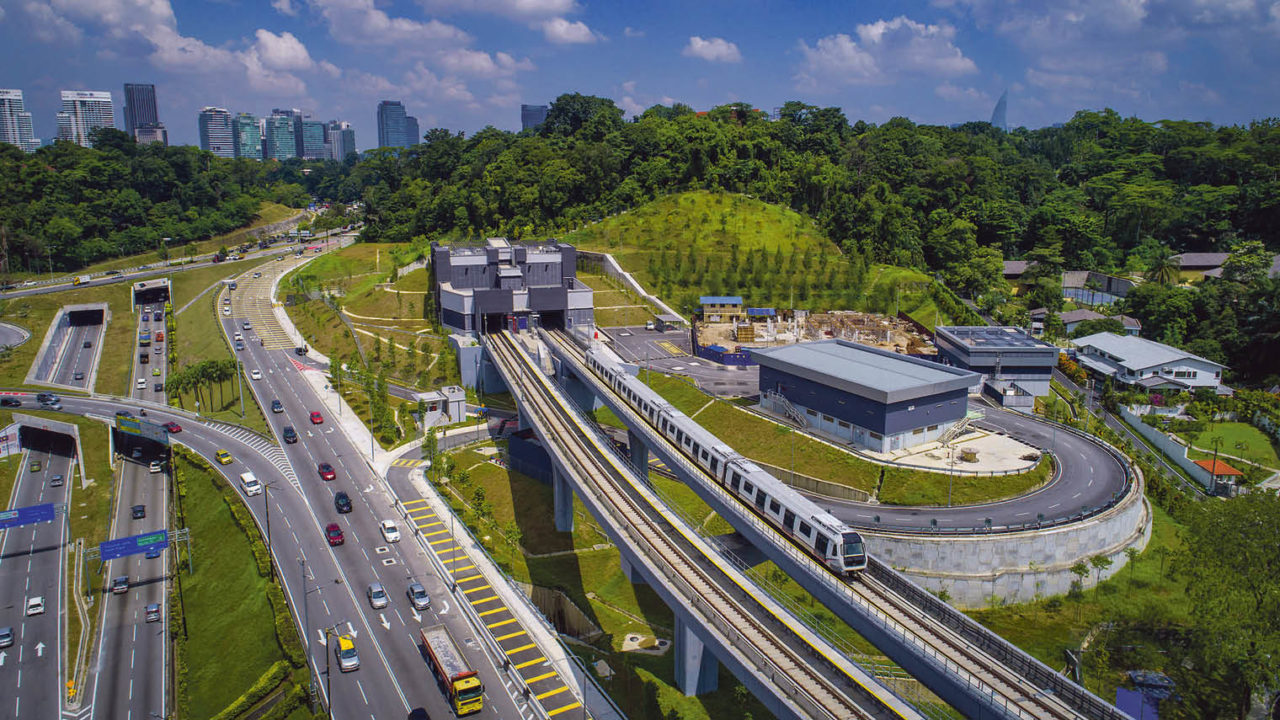 If you’re thinking about infrastructure, it’s likely you’re picturing construction: dirty, messy, inefficient and wasteful, with a serious disconnect between designers and architects, engineers and builders, and operators of the asset. Projects often come in late and over budget. The European Commission has even estimated that 30 to 35 per cent of waste comes from construction.

The advent of big data is, however, bringing an end to that model, with the connected environment transforming the way in which infrastructure is designed, planned, constructed, operated and maintained.

As Charlie Ely, project engineer at Mabey, says: “The use of digital technology is transforming the speed and efficiency of infrastructure projects. By making use of digital services, contractors can create 3D models of projects in advance to phase and co-ordinate the physical elements and timings of a project. This saves time on having to visit a project in person while minimising the risk of human error.”

This is not without its challenges. Will Cavendish, global digital services leader at Arup, points out: “One of the most significant barriers for the UK’s built infrastructure is that it is still far from digitised. Data is largely fragmented and of poor quality, so not in a fit state for mining, analysis and insight-generation.”

This understanding led to the UK government’s Level 2 Building Information Management (BIM) mandate in 2016, whereby all government-procured buildings have to be created using BIM. The process is a collaborative way of working that facilitates early supply chain involvement. Using 3D models it is intended to result in more efficient ways of designing, creating and maintaining infrastructure assets.

It has resulted in a fundamental transformation of the infrastructure sector, led by the application of new technologies and tools, from sensors, the internet of things (IoT), machine-learning and drones. As Andrew Watts, chief executive of Newtecnic, says: “It’s no longer about designers and engineers producing 2D pictures; it’s becoming a process that leads to making.” 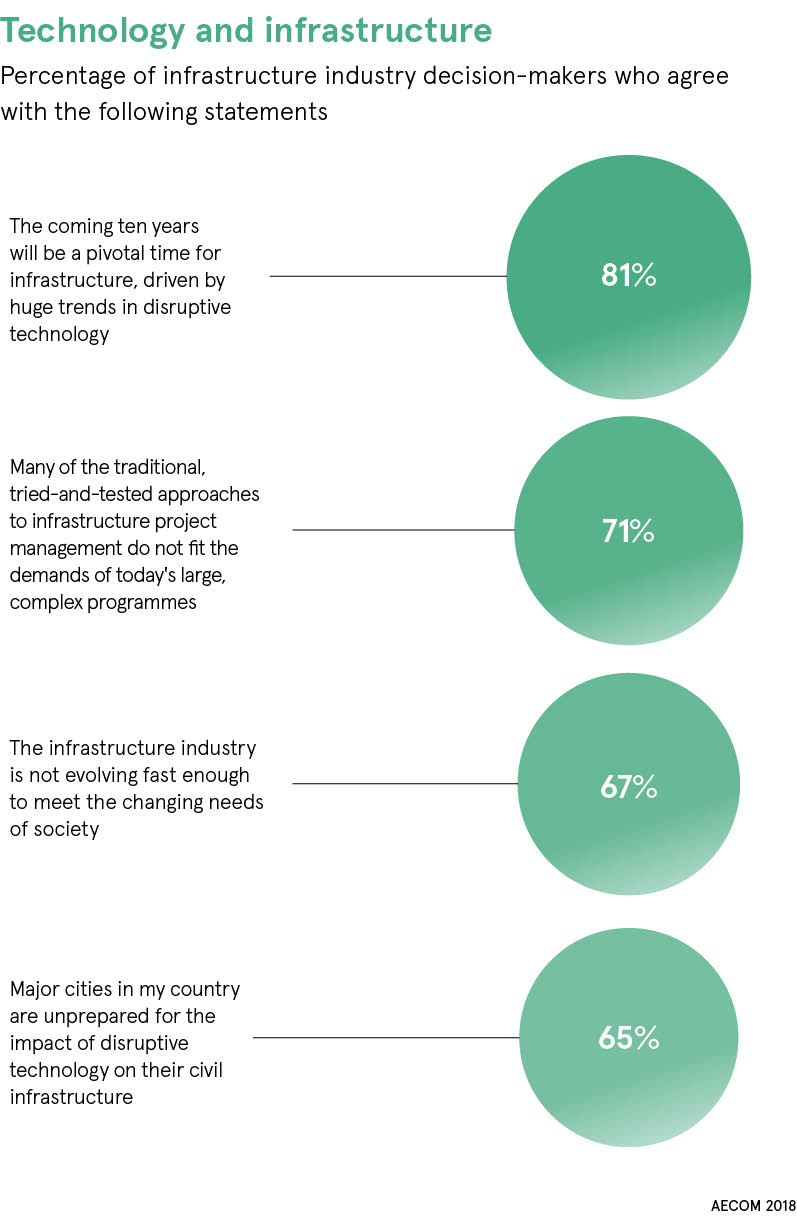 Jonathan Hunter, chief operating officer of Elecsoft, notes that with growing population comes a growing demand for infrastructure and digitisation is then necessary to survive. Construction projects are increasingly complicated and, when complete, it’s often difficult to assess exactly what happened and when.  This can result in increased costs, putting managers under greater pressure to improve costs, timelines and efficiency.

The last couple of years have seen this result in failures, with Carillion the latest victim. Mr Hunter says digitisation is about providing the evidence of impact across the industry, adding: “Visibility across buildings and projects allows you to see the return on investment. It’s about design with cost and time certainty.”

Richard Shennan, digital business development director at Mott MacDonald, says: “Smart infrastructure is infrastructure that talks back, telling owners about its condition and its changing patterns of use. This data, together with a live asset information model or digital twin, enables predictive maintenance, scenario planning and investment decisions that will meet the changing demands and optimise through-life asset value.”

Buildings are going to be more like software, all the different elements working together to keep it going, evolving designs and changing functions

The Thames Tideway sewer is a digitally transformed project which has used an integrated model-based design and construction approach, resulting in time and cost-savings as well as virtual reality for maintenance operations.

Santanu Das, senior vice president of design modelling at Bentley Systems, says: “Connected data environments enable everyone involved to collaborate and access data about what’s relevant to them. The digital twin provides real time feedback of the project as it is being designed, constructed or operated.  It’s about exposing the data and making it usable.”

According to Mr Das, this is increasingly the way the process is managed within infrastructure development. In Tianjin, northeast China, the local water utility modelled a leakage map of more than 1,000km of pipes to predict where pipes could potentially break. When building a second rail line for KVRMT, Malaysia’s rapid transit system, Bentley Systems and Microsoft connected project information with asset data, resulting in a 35 per cent efficiency gain over the first project.

As Mr Hunter says: “Infrastructure is evolving. It’s about the delivery of assets”. That makes it likely we’ll see an increase in more offsite building products, especially when every element and impact can be modelled. When things are modular, there is an increased demand for digitisation during pre-construction and a reduction in onsite risk, waste and storage.

He adds: “We move away from construction to life cycle management, which allows us to build more efficiently and more sustainably.” For example, Elecosoft’s Powerproject was used in the construction of the Shard, where large sections were built offsite and manoeuvred into place.

This approach of increasing standardisation also makes it easier to integrate circular economy principles into design and construction. Newtecnic’s Mr Watts says: “Up until the Renaissance, thinking and making were part of the same process. When you have a phase-change in a journey, then the division of labour between design and execution is a problem – holistic thinking is required.”

If you know where all the electrics and plumbing are, and which walls can come out, it allows you to think about how to reuse and recycle elements of infrastructure. The stadium for the 2022 Fifa World Cup in Qatar has been designed and is being built in a modular way, so after the football finals the structure can be disassembled and either rebuilt elsewhere or the elements can be used in the development of new buildings and developments in the region.

Mr Watts says: “Buildings are going to be more like software, all the different elements working together to keep it going, evolving designs and changing functions. Every part of every building needs to be accounted for, so it can be removed and reused. Eventually everything will have to be handed back.”

Mr Das adds: “There will be smart cities, smart buildings and smart traffic management, with changing modalities to keep congestion, accidents and pollution to a minimum.” The digital transformation of infrastructure provides a change to leapfrog the baggage of the past.

It’s not just construction and operation that is set to change, however, as business practice must change too. Mr Das says: “Traditionally the industry was very different, bill by the hour, and estimate the time required with overages charged through change orders. Now the model is shifting from being paid not for what you do, but how much you have saved – owners are much more focused on outcomes.”

The UK’s Institute of Chartered Engineers has a new scheme called Project 13. It is about trying to embrace and adapt a new methodology where owners and contractors will share in best outcomes, resulting in a shift in payment style. Mr Das concludes: “It’s about accountability and transparency. Companies will have to adjust their models and reconstruct their financial models.” It could be this that has the biggest long-term impact on the industry.