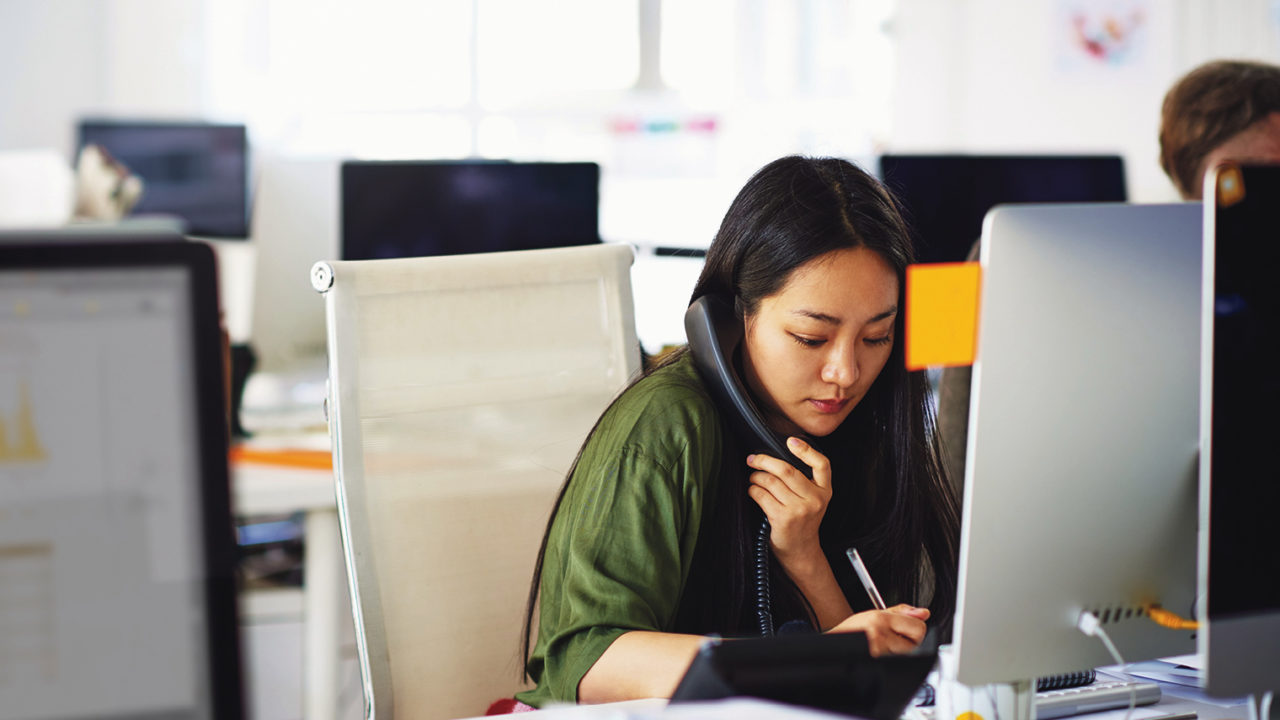 A common gripe levelled by the older generation against young people is that they spend too much time on their smartphones, immersed in messaging apps or browsing social media. Whether the complaint is fair or not, it’s hardly a surprise that young adults between the ages of 18 to 21 use text and chat more than any other generation, and they rate chat almost as favourably as an in-person meeting, according to a 2018 survey by Microsoft.

But with the imminent arrival of this Generation Z into the workforce, what effect will that have on how organisations communicate? Could we see the desk phone, or even voice itself, become redundant within a few years? Moreover, is it wise to shun legacy systems such as the desk phone just to accommodate the preferences of future generations?

Unified communications companies – tech firms that combine voice, video and messaging platforms for businesses – are already investing in messaging and collaboration solutions that can be easily integrated into the workplace. It’s a worldwide market that IDC estimates will be worth more than $22 billion by 2021.

However, the tech firms argue they are not abandoning voice, but offering customers the opportunity to use whichever communications best suits their needs. “What these collaboration tools offer is choice,” says Howard Lewis, surface business group lead at Microsoft UK. “Choice about how we communicate and the tools that will best suit the project and the team in question.”

Amrit Chaudhuri, senior vice president of product marketing at unified communications vendor RingCentral, also maintains voice will always remain a critical part of business communications, pointing out: “Think about how many people join video meetings with their camera turned off.”

He also notes there are circumstances when messaging simply isn’t appropriate. “There will always be instances where voice is needed, use-cases like emergency services, healthcare and legal where voice will be the primary mode of communication,” says Mr Chaudhuri. 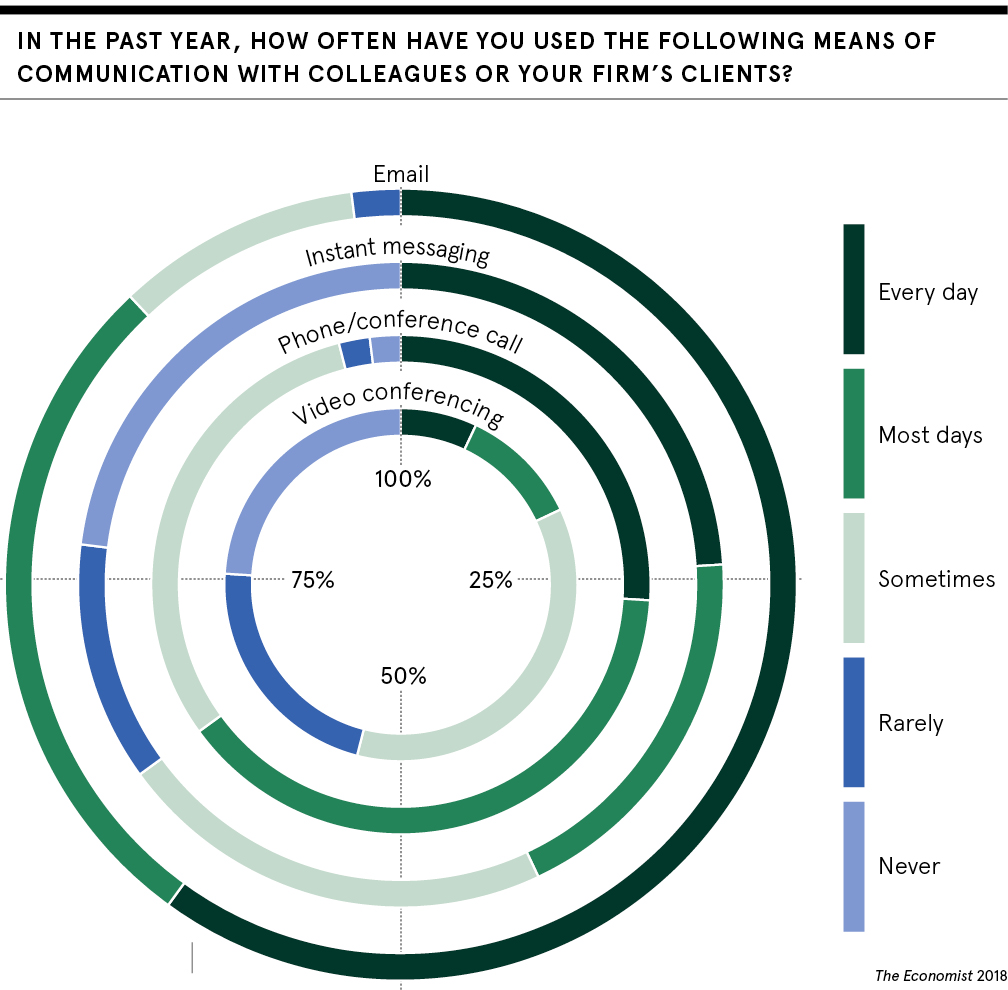 Telephone still the most valued medium of communication

Interestingly, despite the huge research and development investments made by these unified communications vendors into developing messaging and collaboration applications, there may yet be life in the traditional desk phone.

An independent survey by tech marketplace Spiceworks shows most companies remain committed to their desk phones, with 93 per cent still using them. Further, most employees are using them as their primary communications device, much more so than their smartphones or Skype, or other collaboration services on laptops or desktop computers.

Importantly too, the human factor will remain a core component of any business’ success in the future.

“There’s no question that digital communication has become a huge part of the workplace, but despite that, the demand for communication, soft skills, teamwork, empathy, listening, persuasion are even greater than ever,” says Josh Bersin, founder of Bersin by Deloitte, a research and advisory firm focused on management, leadership and human resources technology.

Mr Bersin points to a 2018 study by Bloomberg that found 45 per cent of HR leaders believe the biggest drawback with new graduates is they lack soft skills, if not technical expertise.

What AI will do for unified communications services

So not only does it appear that voice won’t be disappearing from our lives as feared, advances in technologies, such as artificial intelligence (AI), may be set to drive a new way of using voice in the future.

Philipp Bohn, vice president of Atos’ unified communications services business Circuit, says: “We can use AI to transcribe and translate voice sessions. A lot of intelligence and data is needed to understand who’s talking, and understand all the various languages, dialects, nuances and speech habits we naturally process as humans. A huge amount of knowledge is shared through voice conversations and with AI-based transcription it becomes more accessible. Voice is not dead, we are at the beginning of a new, exciting innovation cycle.

“Instead of forcing everyone to have conversations, face to face or via phone, in real time with one another, digital channels make room for conversations over time. I’ll email or text you my question and you can get back to me when you have time. For many young workers, they feel that approach is more considerate of others’ time.’” 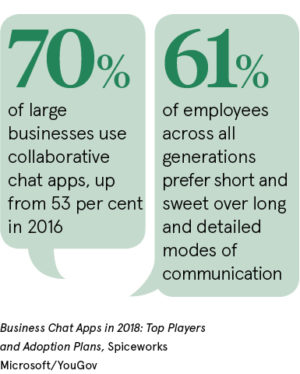 We’re all making fewer voice calls than we used to. A 2018 report by communications regulator Ofcom shows that the number of voice calls made on mobile phones in the UK has fallen for the first time, along with traditional text messaging, as users switch to messaging services such as WhatsApp and Facebook Messenger.

But while picking up the phone might be dying out, an employee’s voice certainly is not, says Julien Lesaicherre, director of Workplace by Facebook. “Technology will continue to advance, but the power of human connection will always remain prominent, so providing a platform to enable employees to collaborate in the way that best suits them is absolutely paramount,” he says.

It seems communicating by voice isn’t going anywhere, but choice will be key. In line with the expectations of the next generation of employees, businesses will need to provide a range of communication methods that suits the needs of both the organisation and the next wave of workers.