Right now, there is a unique opportunity to bring the way we live, share, connect and create into the workplace

Technology, culture, the way we live, the way we work and almost everything that affects the way we do business is changing, and changing fast. But that’s not a controversial thing to say. We all know it’s true. The interesting and useful stuff is how different people and companies react to that – and why.

To enable a more nuanced understanding of the data collected in the survey through cross-referencing results, we asked the respondents to identify their companies as being a member of one of four groups according to their attitudes towards transformation. Companies were categorised as Pioneers, Believers, Agnostics or Traditionalists (below). 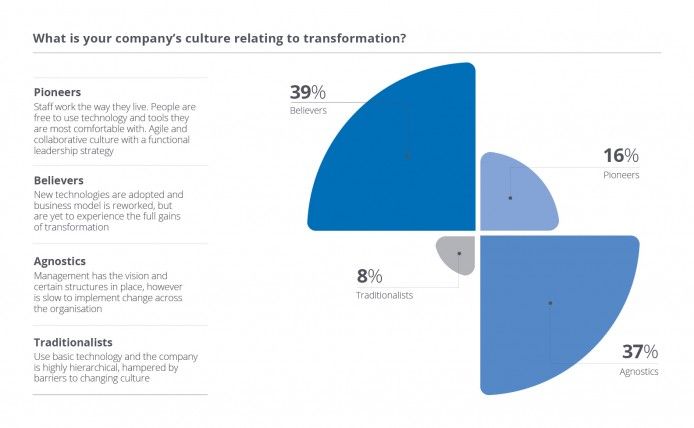 The most popular description of a company (with which 39 per cent of respondents identified) was the one assigned to Believers: “We have adopted new technologies and reworked our business model but are yet to experience the full gains of transformation.”

As well as seeing a wide range of attitudes to transformation among companies, it’s also worthwhile to note that there are currently four generations active in the workforce: Vets, Baby-boomers, Generation-X and Generation-Y. Yet, even with this diverse range of backgrounds and views, the data shows that people are overwhelmingly united by the view that the rise of the “anytime, anywhere” work trend is inevitable: 79 per cent agree with that statement, while only 12 per cent disagree (a further 9 per cent said they didn’t know).

The cost of doing business is viewed as the main global threat to business in the UK, followed by scarcity of talent and government policy

It may come as a surprise that, even in an environment where major ongoing technological and cultural change is an accepted norm, the majority (57 per cent) either somewhat or strongly agree that the accelerating pace of that change continues to take them by surprise.

The world of work is undergoing major changes, that can’t be in doubt. The crucial thing to bear in mind, then, is that the people and companies that are alive to its implications and the possibilities it creates will be the ones who enjoy the most success.

The vast majority of respondents said that adapting digital and cultural strategies is already critical for business success, while only 11 per cent think that their business model would not be impacted, or that they could delay a response until three years’ time (below). 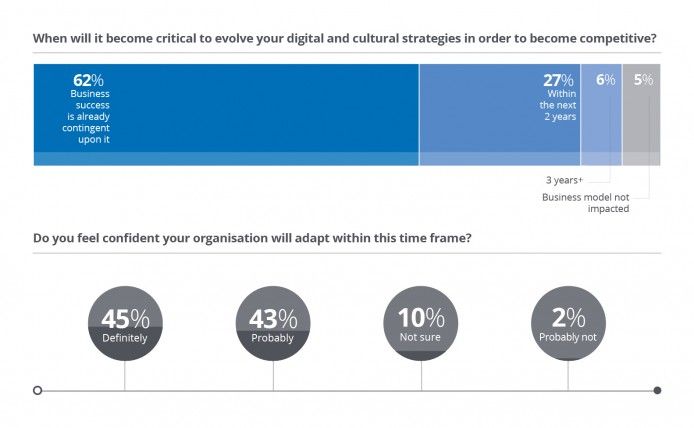 But the data also indicates that the sense of urgency is least pronounced among the most senior decision-makers in a given organisation. Only 32 per cent of CEOs said that adapting digital and cultural strategies was already critical to success, compared to 85 per cent of CIOs and 75 per cent of CMOs. Smaller firms, too, feel a less pressing need to change; 53 per cent of companies with fewer than 250 employees said it is necessary to alter the way they work immediately, whereas some 80 per cent of firms with more than 6,000 employees feel the same way. This trend extends to responses to the question about threats to UK business: lack of agility is seen as a bigger threat by 32 per cent of the largest companies, but by only 17 per cent of the smallest (below). 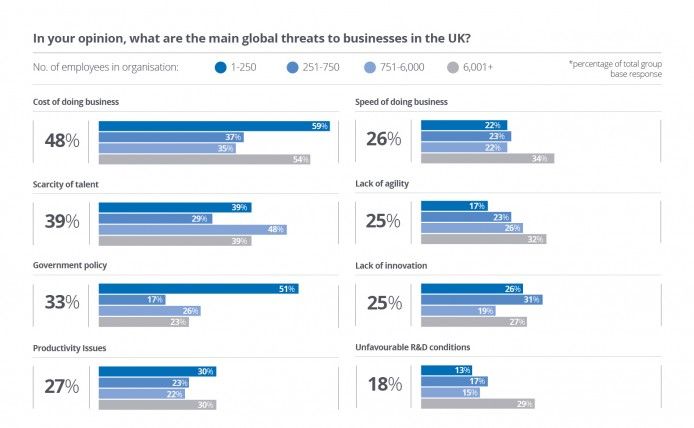 However, the cost of doing business is viewed as the main global threat to business in the UK, which would tally with an impression of the country as a developed economy seeing competition from burgeoning powers in Asia, Latin America and elsewhere. But, like the second and third most commonly mentioned threats (the scarcity of talent and government policy), it is a problem that can, to a large extent, be beyond individual businesses’ control. Productivity issues are seen as the next most prevalent challenge for companies and these, conversely, can be directly affected by when, where and how people work.