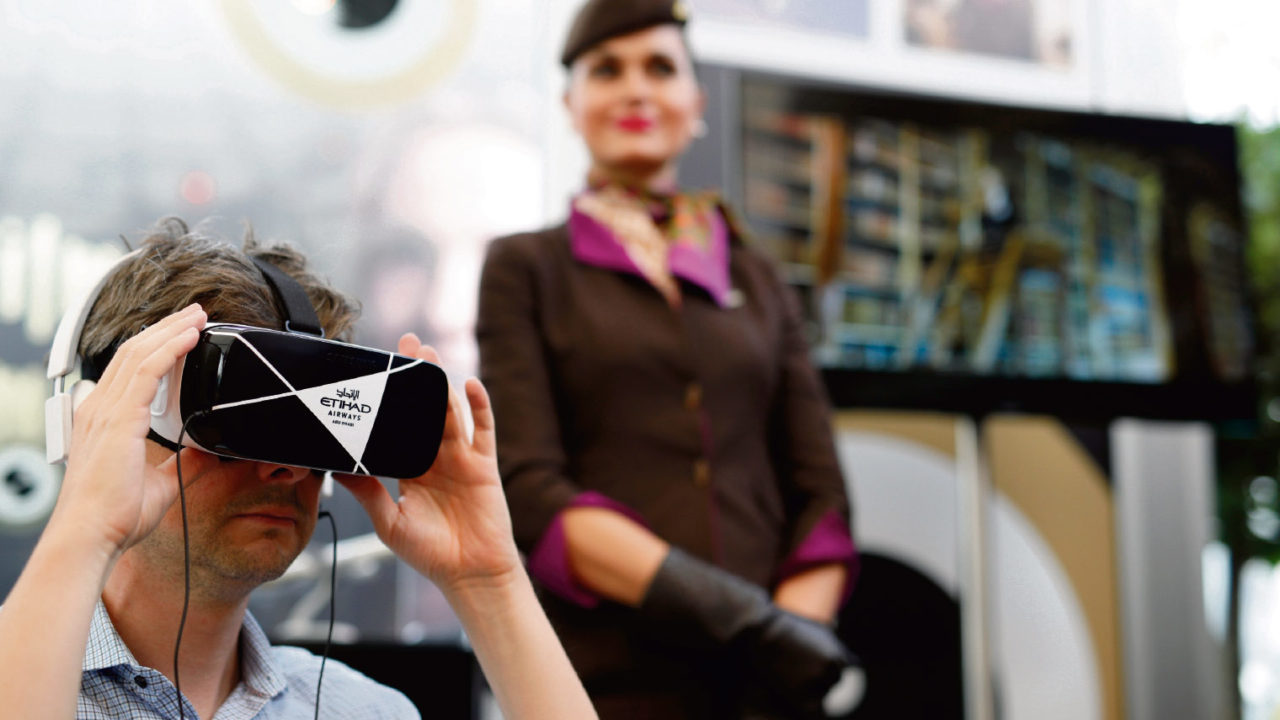 Forget boring things like physical products dragged down by price points. The future of retail is all about the uplifting virtual world. And the saviour has come from an unlikely source, a chase for pixelated characters from Japan. Pokémon Go has stirred consumers’ imagination and now the lines between the real and virtual are blurred forever.

You can now tour the Egyptian pyramids in a Thomas Cook travel agency, zoom through Audi’s virtual car showroom without leaving home or with IKEA you can eye up your kitchen augmented with new furniture. Pop on a headset or download an app and there’s a try-before-you-buy experience out there for everyone.

“These technologies are improving experiences for customers – we know that people don’t like buying products, but they will spend money on experiences, particularly millennials,” says Luke D’Arcy, UK president at Momentum Worldwide, creators of a virtual reality (VR) experience for American Express at this year’s US Open Tennis Championships.

The technology, including augmented reality (AR), which overlays digital information on to the physical world, may have had false dawns in the past, yet many believe the sweet point has now been reached. Now there is scalable computing power and machine-learning, believable visuals, reduced development costs and increasing consumer acceptance, even though only a small proportion of UK shoppers have actually experienced it.

“Of the many changes in the way we live, consume media and shop, it is the convergence of the physical and digital worlds that’s impacting retail the most,” says James Poletti, head of digital strategy at RPM. “Customers now don’t differentiate between physical and digital interactions – they have the same expectations of both.”

It helps that the tech has moved from dedicated equipment, such as headsets from Oculus Rift and HTC’s VIVE, to the pervasive and popular mobile world of smartphones and tablets. Younger consumers are also increasingly curious about the new, which makes the adaptation process faster and easier.

“With the release of Sony’s PlayStation VR soon, the technology will be available in homes globally,” says Tom Roberts, managing director at Tribal Worldwide London. “This will offer endless possibilities for retailers to target customers without having to lure them to the store or spend money on traditional advertising. It will be exciting to see how this accessibility will affect retail.”

And the virtual future looks bright as by 2025 the market is expected to be worth $80 billion, roughly the size of the desktop PC market today, according to Goldman Sachs, $45 billion from hardware and $35 billion from software.

“In five years it’s hard to imagine where it will be, if you look at how far it has come since 2012 and cast forward from there the mind boggles,” says Henry Stuart, co-founder of Visualise. “We will have clarity of vision that is like real life and the resolution will be so high that pixels are unperceivable.”

Google recently launched Project Tango in the United States allowing retail shoppers to navigate to products in-store, while getting rewarded in a revolutionary way, so expect this in the UK soon. “In addition to cameras and sensors found in smartphones, Tango devices are equipped with motion, depth sensors and vision software to create augmented reality experiences that wouldn’t otherwise be possible on a smartphone,” says Mr D’Arcy. 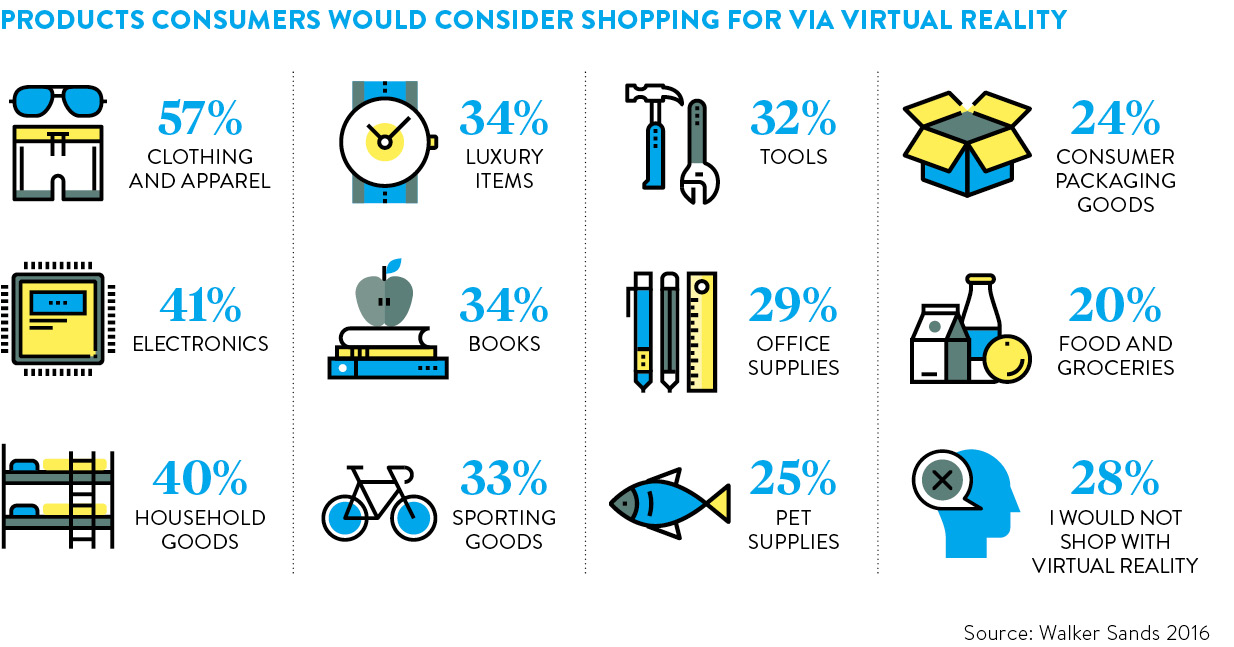 Certainly, as people get used to new ways of experiencing retail, they will start to expect more from this technology, including greater interactivity. “This will put high demands on programming skills and knowledge of how to interact, steering the path for this experience,” says Martin Enthed, IT manager for IKEA communications. “We want to be ready when the technologies become part of people’s everyday life, which is why we started to explore them now at an early stage in order to learn.”

Right now what this technology is good at doing is bridging the so called “imagination gap”. This is where customers can’t imagine what a product will look like in say their own home, so they don’t buy it. VR and AR are helping consumers visualise furniture, paint, wallpaper and carpet.

“With computer vision and machine-learning, consumers are now able to decorate their own rooms virtually,” says David Levine, chief executive of Digital Bridge, who is working with John Lewis in this field. “For basic things like measurements or judging scales, this has great potential in the retail sector.”

There is no doubt VR and AR retail experiences can be memorable, high impact and intense, and as Mr Poletti puts it: “This is the most immersive and mediated physical-digital experience yet available to us.” However, the technology is only likely to reach full commercial potential once it becomes an integrated feature of browsers and companies’ websites, where the process of using it is seamless, requiring nothing more than a single click.

Tylko means “only” in Polish and this furniture company allows you to create and order a personalised table, bookshelf or shelving unit using an augmented reality (AR) app without leaving the room it will furnish. In fact your house becomes the backdrop with your new furniture displayed in-situ via your smartphone. 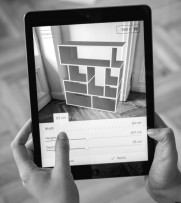 “Anyone can co-design their unique piece by starting with a basic, pre-defined shape and changing its properties, such as dimensions or finish, to match their taste and space,” explains Mikołaj Molenda, co-founder at Tylko.

You get instant quotes in the UK and the company has teamed up with a Swiss designer, so you can personalise his furniture, although Tylko has made sure algorithms are in place that respect the visual harmony of his pieces.

“Our technology offers a level of personalisation and customer engagement that haven’t been possible before,” says Mr Molenda. “AR technologies challenge the existing retail business status quo. They allow brands to move away from brick and mortar to more dynamic models, online and offline.”

You can also create a video with the app. The stars are the furniture you’ve created shot in various rooms in the home, so you can see what you’ve produced before ordering.

Their business model is based on fully automated production, no-middlemen and delivery of the furniture direct. “The newest tech helps us offer something truly novel,” says Jacek Majewski, Tylko’s co-founder. “AR can be seen as an important strategic and branding mechanism in this process.”

Top image: Airlines such as Etihad give customers the chance to experience destinations