It has come under regulatory scrutiny, but high-speed, high-frequency trading has transformed markets, as Rob Langston reports

In a post-crisis investment environment where returns have become more difficult to come by, investors have been forced to look towards alternative ways of generating income. Traditionally associated with hedge funds and specialist firms, high-frequency trading (HFT) has caught the imagination of wider audiences.

With its use of algorithms to execute trades at fractions of a second, it is difficult for retail investors to take advantage of HFT. The ability to react almost instantaneously to market-sensitive news gives HFT firms an edge over other investors.

Indeed, part of the reason HFT has gained greater notoriety among investors and the public more recently came after the publication of Michael Lewis’s Flash Boys earlier this year. The author’s controversial allegation that markets are “rigged” against non-HFT investors has forced politicians and the regulators into action, although it has met with resistance from some quarters.

“The book made the subject a mainstream issue by giving an exceptionally biased and largely inaccurate account of modern market structure,” claims Johannah Ladd, secretary general of FIA European Principal Traders Association. “The idea that the stock market is somehow rigged is a gross and irresponsible conclusion.” 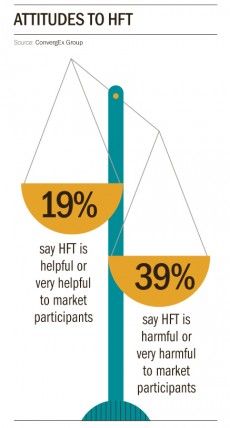 New initiatives, task forces and studies into HFT to examine any negative effects on markets have been launched. Yet, the results have often been inconclusive.

“HFT is just a tool and like any other can be used for good or ill. You can do market abuse with HFT, but you do not need HFT to do market abuse,” says Clem Chambers, chief executive of market data provider ADVFN. “Like all new technology, you can see it as a boon or a Frankenstein’s monster. This is why HFT sits squarely in the lap of the regulators to regulate.”

The hype surrounding Flash Boys made it more difficult for regulators to keep HFT lower down the regulatory agenda and firms now face much closer scrutiny.

The US Securities and Exchange Commission (SEC) brought its first action against an HFT firm for alleged market manipulation in October as New York-based Athene Research Company agreed to pay a $1-million settlement over the allegations.

“When high-frequency traders cross the line and engage in fraud, we will pursue them as we do with anyone who manipulates the markets,” SEC chairwoman Mary Jo White announced at the time.

The prevention of further market abuse scandals, following the ongoing investigation into alleged Libor-fixing, has become a priority for international regulators and is likely to be a keystone of the watchdogs’ oversight of HFT.

“The challenge now for regulators, with advancing technologies, is to promote a level playing field between market participants, to ensure better transparency and accountability and to monitor HFT firms more effectively for market abuse,” says Tony Katz, partner in the litigation and regulatory team at DLA Piper.

While some of the challenges facing global regulators will centre on the technology involved in algorithmic trading, HFT firms are also likely to face more regulatory scrutiny over behaviour.

The challenge now for regulators, with advancing technologies, is to promote a level playing field between market participants

“There are some underlying issues relating to disruptive behaviour and intent that need to be addressed. But how should policymakers react?” says Dan Marcus, chief executive of trading platform ParFX. “Rather than an ineffective and expensive ‘cure’ in the form of legislation, which could take years to implement and likely result in regulatory arbitrage, a proactive preventative solution is required.”

FIA European Principal Traders Association’s Dr Ladd concedes, while there is room for improvement, the basic functioning of the market remains sound. “The general public are interested and want to understand, and the financial industry and market participants have a responsibility to help them do that,” she says.

Ashurst partner Rob Moulton adds: “While HFT brings the benefits that go with greater liquidity and automation, the industry needs to win the battle for the hearts and minds of regulators – and therefore of politicians – if new rules are to avoid damaging this process.”

As well as the prohibitive costs and infrastructure often needed to become an active high-frequency trader, new regulation, particularly in Europe, could prevent smaller players from becoming active in HFT.

“While some smaller firms have embraced the potential of an investment in HFT technology, MiFID II [European Commission Markets in Financial Instruments Directive II], together with the already implemented German rules for HFT, impose a cost of regulatory compliance which is likely to diminish the attraction of HFT trading for new or small market participants,” explains DLA Piper’s Mr Katz.

Although HFT is unlikely to be utilised by retail investors, they are now at least beginning to understand how it affects their own investment strategies and decisions.

The sheer volume of trades by high-frequency traders has given the sector an important part in the development and structure of markets; HFT firms can generate other benefits for the market.

“HFT is often demonised, but it can make markets more efficient. For example, there is no doubt that it has added volume and liquidity to trading,” says Hugh Cumberland, capital markets solutions manager at UK firm Colt Technology Services.

“It is estimated that daily trading volumes have increased by up to 50 per cent as a result of HFT, which has helped reduce the cost per trade. There is also a view that HFT has reduced the spread between buy and sell prices for investors looking to dispose assets, which helps to reduce volatility.”

David Mercer, chief executive of London-based FX trading facility LMAX Exchange, concludes: “There has never been a better time to be a client – price discovery is much more transparent and trading costs have declined to accessible levels. HFT traders are here to stay and they have become the biggest market makers.”

It remains to be seen whether latest revelations that six banks, collectively fined £2.6 billion by UK and US regulators over their traders’ attempted manipulation of foreign exchange rates, will dent confidence.