When Jim O’Neill, who invented the concept of the BRIC group of nations, retired 18 months ago, he wrote himself a Post-it note.

The man once known as a rock’n’roll star of the world’s currency markets, simply wrote the name Anthony Bolton, the legendary Fidelity asset manager.

“My arrogance expected me to be offered loads of things. Anthony was one of the greatest guys with a great track record over 30 years who retired and thought he knew how to sort out China with a special fund. It didn’t work out for him,” says Mr O’Neill. The note was a personal warning.

Despite years of success as economist and forecaster in world currency markets, anyone seeking glib trading strategies from him, or indeed the creation of his own fund anytime soon, will be disappointed.

His approach is a pragmatic mixture of judgment, instinct and theory. First he has to understand significant economic parameters, from trade, bond and investment flows to equity valuation and forward-looking earnings, before watching for anomalies that policy makers may have to acknowledge.

Then he “takes a view”, although on many occasions that “view” is to do nothing because he really doesn’t know how the markets are going to react.

“One of my insights was not being scared of saying ‘I don’t know’. I think having the belief to say I don’t know is part of the basis for having belief when you think you do know,” says Mr O’Neill, who grew up in a tough part of Manchester and is a life-long Manchester United fan.

The former Goldman executive says he is also proud of trying to avoid “over-intellectualising everything or putting it in too complex or formulaic a way”.

He is very sceptical that anyone can have a trading strategy that can permanently beat the market, and everyone else, in such competitive arenas.

“I used to say the Andy Warhol principle stood in foreign exchange – for 15 minutes anyone can be a hero, but within the next hour the market will make an idiot of you,” says the man who over his career has nonetheless made a number of big successful calls. In 2004, he accurately predicted that the euro would rise from $1.25 in February to $1.30 the following year and forecast the rise of the yen in the 1990s.

Earlier this year, as a personal investor with his own Bloomberg terminal, he made some more money “shorting” the New Zealand dollar, taking advantage of uncertainty over the role of the central bank in advance of a general election.

But Mr O’Neill, who unusually was brought into Goldman as a partner, believes a really good forecaster “is only right 60 per cent of the time”.

He certainly hit his target in the days before European monetary union with so many European currencies to play with, but the euro is more challenging.

I used to say the Andy Warhol principle stood in foreign exchange – for 15 minutes anyone can be a hero, but within the next hour the market will make an idiot of you

“All I knew was that it was going to go up or down, not necessarily in that order,” laughs the economist who also warns of the danger of ego in investing, particularly male egos.

Mr O’Neill says he is really interested in taking a view on a major currency when “it is two standard deviations away from some notional fair value”.

For instance, if in an ideal world of perfect competition the euro should stand at €1.20 to the dollar and was actually above €1.40, then policy makers would probably act to stop the currency going too high.

“In March, I took a personal position shorting the euro and made a bob or two,” he says, admitting to struggling with obeying the mantra that you let your winners keep going and cut your losses early. Sometimes he takes his “winnings” too early.

The name of the game, he believes, is to concentrate on the big relevant issues and avoid being distracted by noise.

He is currently “neutral” on the US because it is “expensive” and vulnerable to unexpected bad news. He takes a contrarian view on fashionable negativity about China and believes it is “doing better than people think” and ponders whether Germany may be forced to loosen its historically strict anti-inflation policies.

Just back from a holiday in Puglia, which emphasised Italy’s plight of no growth and rising debt, Mr O’Neill ponders future policy.

Would Germany stand aside and let Italy go through a Greek-scale crisis? Something that would, he believes, be “a disaster for Europe and the world”.

“At some point I would imagine Germany is going to change policy on current inflation limits,” he suggests. Would such issues affect his investing decisions? “Definitely,” is the immediate reply.

Mr O’Neill has also embarked on “the fun, educational and sometimes almost philanthropic” business of investing in a wide range of startups in search of big wins, although a couple have already gone bust.

The greatest amount of money he has probably created has not been for himself. The concept of the BRICS – Brazil, Russia, India and China – he believes increased both values and interest in the grouping.

This year he came up with MINT – Mexico, Indonesia, Nigeria and Turkey – and policy makers there are now exploring whether they can do things together as the BRICS did. 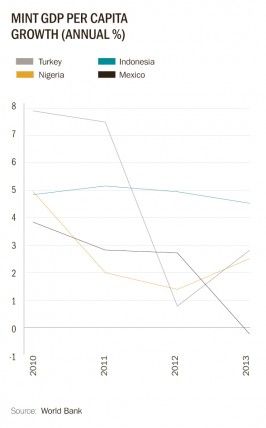 “That’s the legacy on my tombstone – the guy who allowed all these weird politicians from those countries to get together with a purpose that otherwise wouldn’t have existed,” says the 57 year old.

Mr O’Neill has recently come up with a third, less elegant acronym – ManSheffLeedsPool – to try to focus attention on, and boost the economic development of, Northern cities – another of his passions.

The usually cautious forecaster is remarkably precise on one particular judgment.

Are the glory days over for Man United?

“Definitely, unfortunately. Nobody has success forever. We may have started a cycle where United may struggle for years,” predicts the man who led the unsuccessful move to oust the current owners, the Glazer family.