Useful applications of wearable technology are multiplying fast as innovators across numerous sectors find lucrative ways of putting the tech to work. Here are ten of the best... 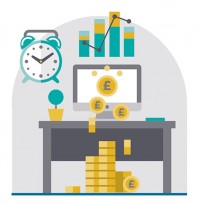 The obvious application for wearables in finance would be stock price tickers and alerts. In fact, the industry is far more interested in the health implications of wearables. Essentia Analytics produces software for wearables to help professional investors optimise their decision-making through health improvements. Founder Clare Flynn Levy says: “We’re particularly interested in how sleep and stress levels impact trading behaviour. We can take as much or as little information as a person or company is willing to provide, and with this data show the wearer if he or she makes better investment decisions after exercise or after a good night’s sleep.” Jawbone is promoting its UP3 device as specifically targeted for the people working in stressful trades such as insurance and finance. A study undertaken by Jawbone revealed subjects who got more than seven hours’ sleep were 30 per cent more likely to report feeling rested, and more like to feel optimistic and alert. 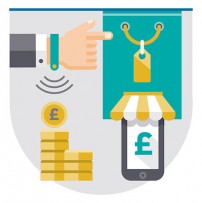 Shoppers love wearables. A survey conducted by PowerReviews shows this could be the single biggest sector for the devices, after fitness. Among those who own a wearable device, 34 per cent already use it for shopping. A third of those who plan to buy a device in the next 12 months will do so to help them shop. Push notifications are one use. The survey shows 35 per cent of shoppers would be happy to receive discounts or other highly relevant information on their wearable, and a third would enjoy skipping queues by receiving an alert when a sales person is ready to see them. Retailers are keen. More than a quarter want the ability to sell through one-click payments via wearables. However, despite the publicity around Apple Pay, many consumers don’t know how to use it. Payments news site Pymnts.com and InfoScout found in June that only 13 per cent of those with an iPhone 6 had used Apple Pay, with a third saying they were unsure how it worked. 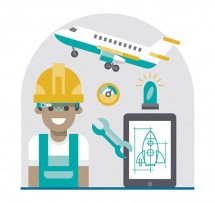 At the Augmented World Expo in Santa Clara, California, Boeing revealed the results of the aircraft maker’s experimentation with wearables. An internal study tracked how trainees performed when asked to assemble a wing. There were three groups – one using a PDF on a computer screen, one with a PDF on a tablet, and a third using animated augmented reality instructions. The augmented reality group were 30 per cent faster and 90 per cent more accurate than the other groups. Airbus is implementing intelligent eyeglasses in its Factory of the Future programme. On an Airbus A350, a heads-up display created by National Instruments allows engineers to pick the right tool to fit the right bolts and hardware. The results are transmitted to Airbus’ quality control systems. The Connected Worksite by JMG creates a network of hazard beacons and wearables to alert workers when they are entering a zone of high risk, and notify surrounding devices of their proximity. 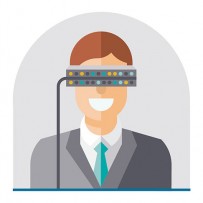 Virtual reality (VR) and augmented reality are going to take gaming to new places. Euan Davis, director at Cognizant and head of the Centre for the Future of Work in Europe, says: “VR is making its way into industries, such as travel and retail, boosting the customer experience and building brand loyalty. For example, there are impressive features already being developed for passengers of long-haul flights, which will see passengers using VR headsets to watch films and take virtual tours during flights. Lexus has also developed a virtual reality driving simulator at its headquarters in Japan to test safety features.” Facebook paid $2 billion for Oculus, the market leader in VR. Facebook founder Mark Zuckerberg stated bluntly he saw it as a gaming device. The Oculus Rift headset faces competition from the HTC Vive. Are they any good? Check out the YouTube videos of users enjoying the thrill of a rollercoaster. They nearly pass out. 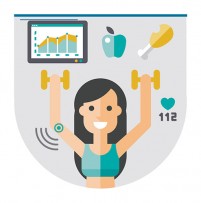 As the fitness industry keeps telling us, wearables can get you jumping, leaping and running. Now the insurance industry is keen to get in on the action. By tracking customers’ activity, insurers can keep policy pay-outs down to a minimum. A report by Pegasystems found 25 per cent of millennials – people born between the early-1980s and early-2000s – would be happy for data collected by a wearable device to be sent to their insurer if it meant lower premiums. A remarkable one in five are willing to have a non-intrusive device, such as a chip or tracker, inserted into their bodies to monitor their health or behaviour. Fail to exercise or eat the right things and there could be a financial penalty. New York insurer Oscar is already offering clients free Misfit Flash trackers. Users receive $1 credit when they hit their daily goal, up to $240, which can be redeemed for Amazon gift cards. 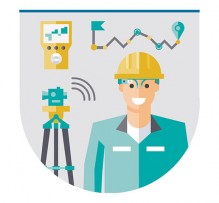 We are in the infancy of field-service wearables. Research house Aberdeen revealed in its Service Mobility report that just 6 per cent of the field-service workforce is equipped with a wearable device. But three times that number showed an interest in adoption. Software company ServiceMax calls field service the “killer app” for wearables, citing augmented reality glasses for hands-free operation, video-conferencing facilities and sensors, such as radiation detectors. Dave Hart, vice president of global customer transformation at ServiceMax, says: “With wearables, field techs have the potential to harness a range of supportive functionality, such as augmented reality, 3D visualisations and video conferencing to gain critical information, and better facilitate service calls. Schematics can be overlaid on to machines while they are servicing them and colleagues can help field workers in remote locations by seeing what they see on-site to lend support, rather than incurring the expense of flying in an expert.” 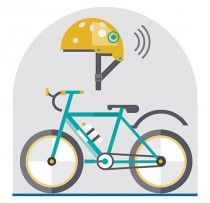 Bike safety is poor, especially in congested city centres. The Lumos bike helmet is a prime example of how wearables can improve safety in the transport sector. The helmet features integrated brake lights and signals. The cyclist activates the turn signals via a wireless remote. Once triggered the bright yellow lights form an arrow at the back and a dash at the front to warn drivers of an impending manoeuvre. The brake light alerts drivers to a slowing bike – something pretty hard to detect in dark conditions. The helmet is currently available on Kickstarter. For cyclists who get hit, the Hövding airbag is a remarkable innovation. It is a collar worn around the neck and contains sensors, which detect an imminent crash, inflating the airbag in a tenth of a second. Tests suggest the Hövding incorporated into a helmet could be three times more effective than a traditional unit. In the past two-and-a-half years, more than 14,000 have been sold, with over 100 cases where serious injury has been averted. 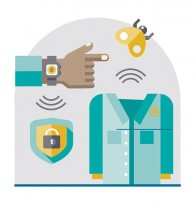 One of the major threats to the wearable industry is hacking. A study by HP published in July found vulnerabilities across the current smartwatch range. This supported another HP study which reported 75 per cent of internet of things (IoT) devices contain glaring security holes. One of the most problematic areas is radio-frequency identification (RFID). Hackers within proximity can read unprotected or unsecure RFID chips. The solution may lie in wearables. A new range of travel clothing by the Craghopper brand incorporates RFID blocking to protect against cyber crime. The collection includes protective jackets, trousers and gilets, which let travellers carry contactless credit and debit cards without fear of being hacked. The application goes further, as many implantable health IoT devices work via RFID, so may be exposed to unauthorised access. The Craghopper range is also impregnated with anti-mosquito technology, billed as achieving up to a 90 per cent reduction in bites. 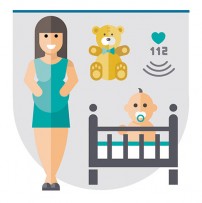 The ZubZub device won the Innovate UK wearable tech challenge in the Kids category. The ZubZub can help children wind down through the “phenomenon of heart entertainment” or people’s natural synchronisation with external rhythms. It works like music, but uses a tactile stimulus, rather than an audio one. This means it can work without sound and in a more controllable way, according to the makers. For premature babies, there is the BabyBe system, made by a company from Chile. A haptic mattress translates the mother’s heart beat to the baby in the incubation unit. The mother hugs a device called the Turtle, which detects her heart beat, breathing and chest movement. The bionic mattress replicates the sensation for the baby to promote bonding. With 15 million premature babies born a year, there may be a huge market for the BabyBe. “It gives premature babies the ability to feel their mother’s touch from within an incubation machine,” the company says. 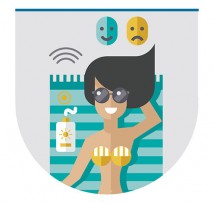 If wearables are going to take off, then the tech folk need to talk to the fashion industry. And the early collaborations are showing what can be achieved. The Spinali Design bikinis and towels tell users when to apply more sun cream and when they are in danger of burning. Dr Alexis Granite, consultant dermatologist at Cadogan Cosmetics, says: “While these should not replace more traditional practices of avoiding sun at peak hours and regular application of a broad spectrum sun screen, these devices could be helpful as another tool for patients, especially ones at high risk of skin cancer, to stay skin-safe outdoors.” AXA PPP recently showcased the GER Mood Sweater. This detects the wearer’s emotion by measuring galvanic skin response. A coloured light reveals the emotional state. Devised by Sensoree, the sweater may be of use for Alzheimer’s patients, who can’t express emotions verbally.