The economic downturn has helped procurement get more spend under management, but there are still widespread variances in organisations’ degree of maturity around implementing – and enforcing – formal category management procedures.

“Even leading organisations still find some categories difficult,” says Michael Lewis, professor of operations and supply management at the University of Bath. “We still don’t have a handle on the buying of services in the same way as we do products.” 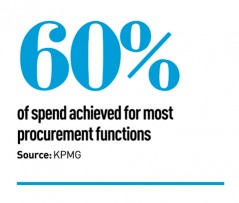 A further challenge is around linking any savings procurement claims to have made to the bottom line. “You can get compliance, but those results are then used differently and you still don’t see it in your profit and loss,” says Kris Timmermans, global procurement lead at Accenture. “The reporting of £100 million of savings which nobody sees is unsustainable.”

Despite its higher profile, procurement also has to fight for recognition in the wider business, particularly at board level. “It remains puzzling why procurement continues to be a Cinderella function in comparison to other areas,” says Jim Abery, partner, commercial excellence, at Ernst & Young.

To change this perception, procurement needs to demonstrate it can contribute to the top line as much as the bottom, he says, as well as developing the leadership skills needed to act as a strategic partner to the business.

Risk remains very much front of mind for procurement, particularly around the possible implications of supplier failure and natural disasters. This has partly been due to the recession and events such as Hurricane Sandy in the United States, but also because organisations have woken up to the fact that they now operate in a much more globalised environment, says Professor Lewis. “Clearly if you operate a global supply chain, you have a different risk portfolio than if you operate in the south-east of England,” he adds. 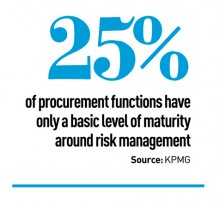 Other risks are now appearing on procurement’s radar, says Mr Timmermans, including how to cope with commodity price volatility. “For many of the processing manufacturing industries, the speed with which the commodity prices go up and down is unseen,” he says. “A number of our clients are working with Treasury to set up commodity pricing risk management capabilities.”

Managing reputational risk from the wider supply chain is also on the agenda, particularly in the wake of the horsemeat scandal. Increasingly, he says, procurement needs to be able to monitor quality throughout the entire chain, rather than just tier-1 or 2 suppliers, if it is to avoid being caught up in controversial areas such as child labour, conflict minerals or palm oil plantations.

Sustainability itself is another challenge procurement must get to grips with. Rather than seeing this purely as a risk, though, leading organisations will view it as a source of competitive advantage, says Carlos Mena, director of the Centre for Strategic Procurement and Supply at Cranfield School of Management, and procurement has a pivotal role to play here. 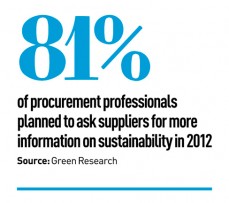 “Companies that are really forward-looking can brand and market what they’re doing in their supplier base around sustainability, whether that’s rooting out child labour, reducing CO2 emissions or engaging with second and third-tier suppliers,” he says.

Unilever is a good example here, he adds; around 70 per cent of its sustainability initiatives are directly related to the supply chain and, over a five-year period, tackling these has made money for the business. “They have shown how you can contribute to the top line by taking care of both the environmental and social issues in your supplier base,” he says.

However, Professor Lewis believes social and ethical sustainability will only be a focal point for those organisations that choose to compete in this way, with environmental sustainability likely to be the main focus for most procurement functions on account of resource scarcity and cost of raw material. “The risk around environmental materials is shifting so we will behave differently in the way we purchase and use them,” he says.

Technology is set to fundamentally change the way in which procurement operates over the next few years, says Gerard Chick, chief knowledge officer at Optimum Procurement.

This will be led mainly by the rise of networks built around social media technology, which will enable procurement professionals to stay up to speed on industry developments and interact with multiple-tier suppliers all around the world. “We are at the dawn of instantaneous business 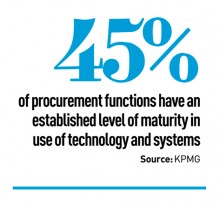 intelligence,” he says. “It starts to bring visibility, so proper open-book pricing and transparency.”

The development of such platforms means procurement will increasingly be able – and expected – to make decisions based on research and the use of predictive data, says Mr Chick, including using analytics to predict periods of peak and low demand to help with buying decisions.

Ultimately, this will change the skill-set required for those working in procurement. “Procurement people will need to be two things in the future,” he says. “They need to be analysers, who know what’s happening in the places where they work, but they will also need to be able to delve around and bring issues to the fore in a business. In the future we won’t need buyers; we’ll need people who understand markets and can be the ones the rest of the business goes to.”

Attracting fresh talent into the industry is likely to be a core focus for procurement functions as the skills required by procurement professionals change. “If you want to engage better with the organisation and show that procurement can add to the top line you need a different breed of people,” says Dr Mena. 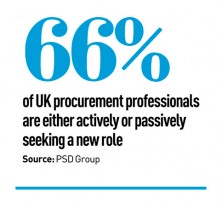 Softer skills in particular will be required as buyers increasingly need to influence those outside the procurement function. “People with a good emotional IQ tend to go to other functions, so the issue is how we can attract these people,” he says. “It’s about recruitment rather than training and development because softer skills are much more difficult to teach.”

Companies should be thinking of partnering with industry bodies and schools to offer top young talent a route into the profession that may not involve going to university, says Mr Chick.

Organisations will also have to wrestle with how much of an in-house procurement presence they want to have, says Professor Lewis, as many look to outsource procurement activity to third parties. “What is a critical mass for procurement in a firm which has decided not to do that in-house?” he asks. “It’s an interesting dilemma going forward and one that not many firms have got to grips with yet.”