Name a search engine. It’s fairly likely Google will spring to mind. Name a place to buy books. And so on. Name a payment provider. Where to stop? The payment tech market is so densely populated that it almost seems impossible for any payment technology to achieve ubiquity.

Moreover, there might be a wealth of information available, but it’s often so fragmented and confused that it’s hard to see where the consumer would start to understand – or choose a provider – and, moreover, whose job it is to help or educate them.

Another problem is the sheer range of technology on offer. Twenty per cent said they would install contactless payments, but 73 per cent were planning to install tablet technology. Forty per cent had plans for digital signage and nearly a 32 per cent are opting for in-store wi-fi or mobile phone apps. Deloitte predicts that by the end of 2015, some 5 per cent of the 600-650 million NFC-equipped (near-field communication) phones will be used at least once a month to make contactless in-store payments at retail outlets.

Payments are built on a complex ecosystem requiring the proactive effort of multiple parties. In each transaction there can easily be five or six different parties involved to process the payment, not even including the retailer.

Andy Povey, business development director at Gateway Ticketing Systems UK, which provides ticketing for some of the UK’s leading attractions, such as the V&A Museum, Houses of Parliament and Kew Gardens, says the company is rolling out contactless payment technology across its client base.

“We have seen an interesting reluctance in uptake,” he concedes. “The challenge comes from knowing who can provide you with the best hardware, installation costs and ongoing fees. There is no one place to compare these providers in the way we are so used to comparing other business and home utilities. Getting the best deal can be daunting.

“The challenge [for customers] is trusting the security behind the payment. Consumers can find it difficult to grasp a new technology and even those who regularly use contactless payments can be suspicious of just how secure the new payment method actually is.”

So whose job is it to educate? While payment companies can provide some guidance, the payments themselves are governed by the credit and debit card providers. This means, says Mr Povey, there are a number of sources to contend with for good-quality information. “With different payment providers also comes differing information on hardware, installation information and user fees. This can mean that you only get one point of view from the provider you currently use for regular card payments,” he says.

Simon Black, chief executive of the PPRO Group, an integrated solution provider enabling international electronic payment processes, says it’s partly about common platforms. “For online shopping we have effectively a global commerce platform – the internet. But we don’t have a global payments platform. In North America and the UK, Visa and MasterCard have very high penetration, but then even in Western Europe the picture can be very different. Germany is a good example of this, where the fastest growing online payment method is actually via an invoice.”

For in-store payments, where mobile and contactless payments could be used, different countries and regions are at varying stages of development in their card infrastructure alone, says Mr Black.

“For example, to accept a contactless payment requires an up-to-date card terminal. Contactless is the ‘missing link’ in the virtual wallet’s equivalent to the evolution of man. Once you are used to tapping or waving your card, it’s a small step to waving your phone or your smartwatch. Beyond the speed and convenience of contactless payments, there will be more benefits to your virtual wallet. No more paper receipts, plus all spending itemised and categorised in one easy-to-use-application,” he says.

Mr Black predicts that by 2025 most people in the majority of countries will have a virtual wallet on their phone. “It’s simply a case of market evolution before a tipping point is reached in terms of consumer acceptance, the right infrastructure and environment, and the product and pricing being appropriate.” 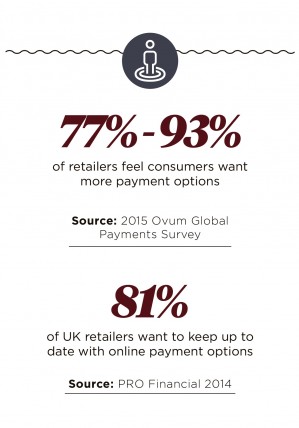 It’s possible that the biggest challenge, however, is consumer behaviour. Mr Black adds: “We don’t change our habits unless we are forced to – for example, wearing seatbelts – or unless there is a compelling benefit – mobile phones went to full adoption incredibly quickly for such a new technology. Consumers tend to adopt new products or services quickly if they’re simple, intuitive and compelling, without needing extensive education. In the case of contactless, in London it required the card-issuing companies to issue contactless cards, retailers to upgrade their terminals, and the card schemes MasterCard and Visa to invest only a relatively modest amount in communication and education.

“The biggest driver though was a very clear benefit aimed at the right market. In London, as with any of the world’s major cities, there are millions of workers short of time who are making many small, daily purchases, such as coffee or sandwiches, and the notion of tap-and-go is as simple as it gets.”

“Companies that are more efficient at onboarding customers will be able to win a piece of the pie, but this isn’t the whole story,” says Mr Van der Kleij, “Things like Alipay and Facebook [which offers free friend-to-friend payments through its Messenger service] have utterly disrupted the business model.

“Facebook could afford to run the equivalent of a new bank for free – that’s where you might see a giant emerge.”